Home
Articles
Game Review: Orbitâ€™s Odyssey is a space puzzler that is as epic as it's name!

Game Review: Orbitâ€™s Odyssey is a space puzzler that is as epic as it's name! 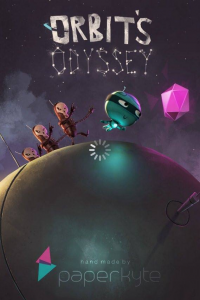 Puzzlers will never grow old and that’s a proven fact. Despite the continuous changes in the game app development department, puzzlers find the way to remain relevant and contemporary. Playing Orbit’s Odyssey has made me realize all these facts and gave me even more reasons to love these types of games.  Developed by studio, paperkyte, Orbit’s Odyssey is a little gem in the world of strategy puzzles and one that I enjoyed immensely playing. Its gameplay, graphics, and challenging levels that make your brain’s gears spin faster to solve, offer great enjoyment for all puzzle lovers and not only.

Orbit’s Odyssey takes us on a journey on the other side of the sun, to a faraway peaceful and prosperous planet named Planet X. But the peaceful days weren’t meant to last forever, as suddenly an evil clan consisting of parasitic robotic space zombies begun attacking Planet X in order to reach its core and steal the powerful Gemstones that could provide them with limitless energy and power. As a result, the balance of Planet X was disrupted and now it is up to our little hero Orbit, a space traveler, to save the planet from darkness by reclaiming the gemstones. Can you help him on his quest?

The game takes place on top of various small moving planets, and you’re positioned on top of them. All around the planet are coins and a gem. If you remain still, the planet’s movement will take you on a circle and you can grab all the collectibles. But moving Orbit is necessary if you want to escape the enemy robots that also appear on each level. To move your character all you have to do is tap and hold at the bottom right of your screen and he will start running on the opposite direction of the planet’s orbit, thus changing the planet’s movement as well. This is basically all you need to do to progress. There are no other controls for you to master, no jumping or shooting against enemies. You simply use one finger to make Orbit run across the planet’s surface. The game is all about clever thinking and precise timing. 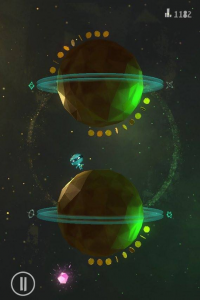 After a few levels you’ll notice that the gem is too high for you to get. But this is only temporary and for the purpose of making things a little bit more intriguing for the player. To bring it closer, all you have to do is collect all the coins beforehand. The difficulty lies mainly to the enemies themselves. These robots follow the planets’ orbit so if you don’t move or if you move earlier than you should, you’ll end up bumping into them and meet your end. As you advance, the enemies will slowly but steadily become more and more and managing your movements and acting at the right moment will require more thinking and dedication from your side.

The game includes more twists though, such as the teleporting. There will be planets (or satelites) that have rings around them and if you run towards them you’ll be teleported to the other side of the ring. This is both helpful and dangerous at the same time because although it helps you avoid enemies and get faster to the coins and gem, it can also mean your demise if you teleport when the enemies are passing from your teleporting point when you appear on it. You probably think it’s easy to avoid that by waiting for them to move before teleporting and although that’s true, there will be cases when things will be so hectic and crazy that making an otherwise silly mistake will cost you the round. Teleporting isn’t limited to one planet only; dual planets will also appear and you’ll be able to travel from one to the other using the rings and more specifically the shapes that appear on the sides of each ring and are there to help you find out where you’re teleporting (e.g. if you teleport from the side that has the circle shape next to it, you’ll end up on the other planet’s point with the same shape). That way you won’t be easily confused despite how difficult things will get.

Things will even get harder in terms of speed as you progress because enemies will start move faster and add to that teleportation and you get the absolute chaos combo! It’s still incredibly fun though. A perfect score (3 stars) rewards you with many stars stars and the coins are points so try to miss none. If you lose you can try again as many times as you need to. There are no timers or limitations on how many times you can try. There are 5 playable characters for you to unlock (I love the Cookie) including Orbit, and to get each one you’ll have to be of a certain level. In addition, the game is separated in Seasons and to unlock the next one you’ll need to have enough numbers of stars. Every Season comes with plenty of levels (90 levels in total) and different settings for you to experience. 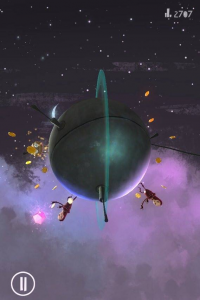 Orbit’s Odyssey is available to download from the App Store, Google Play, and Amazon Appstore for the price of $2.99. Not only is its price low, but it also comes with no IAPs whatsoever and every Season or playable characters are unlocked only through your advancing and skills as we mentioned earlier.

The visuals of Orbit’s Odyssey are absolutely stunning. I find really interesting how the characters are 3D but the backgrounds are made in 2D. It’s definitely something that stands out and it is unique in its own way. The colors are moody and that’s to be expected of a game that takes place in space. Depending on the Season you're playing at though, you'll see different color patterns. Everything looks gorgeous nonetheless. The sound effects and music is also lovely and memorable.

All in all, Orbit’s Odyssey is a puzzler that blends perfectly challenge and fun. It will have you scratching your head at many occasions to find the way to beat the level and even at the most difficult of moments you will love it. it is addicting and I was hardly frustrated whenever I lost, because it only takes a few tries to realize what you need to do.  It is a game suitable for all, casual players and not.  Great gameplay, beautiful visuals, and clever approach on the puzzler genre. Let us know your thoughts in the comments below.

Orbit's Odyssey screenshots (above) and trailer (below)

Paperkyte was founded in 2014 by brothers Prashanth Shantharam and Pramod Modi Shantharam and it is Based in San Francisco. You can find it out more about paperkyte and Orbit’s Odyssey on their official site: www.paperkyte.co.

#android #ios #games #review #amazon #best games #orbits odyssey #paid
Comments (0)
< PREVIOUS ARTICLE
Game Review: Can you make it down the Mars Mountain?
NEXT ARTICLE >
Using Facebook App Wastes up to 15% of an iPhone's Battery, Up to 20% of an Android Phone's Battery â€“ Should You Uninstall and Use an Alternative?