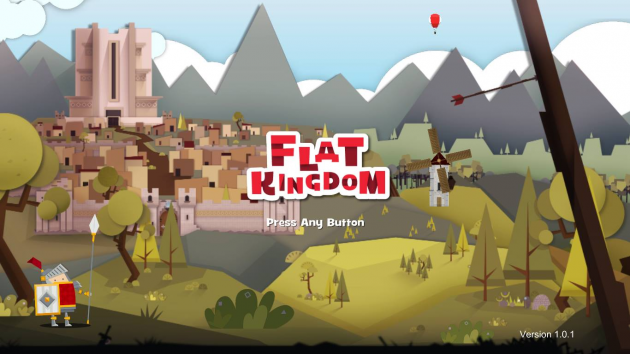 Game apps are fun, no doubt about that. But a PC/console game will keep dominating a players’ interest for a long time to come. That’s why it’s always a pleasure to review new PC games that are full of dedication by their developers and that shows in the result. The same can be said about the game I’ll be reviewing today, Flat Kingdom, for the making of which, the people behind Fat Panda Studios worked on for two years, in order to create a game that will amaze and captivate the players. The magic worked on me, and I can easily I say I loved the cuteness and lovely adventures that Flat Kingdom offers. 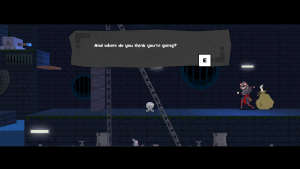 Flat Kingdom takes place in a fantasy bi-dimensional world where magical jewels keep the balance and harmony between the various dimensions. However, an evil fox has managed to steal a jewel and plans on stealing the rest as well, thus bringing chaos to the kingdom. Amidst the cruel fate that awaits the kingdom, when everything begins to shatter and the paper people begin to turn into 3D characters, a hero emerges to save the day! King Square has found the one who can find the jewels, reverse the catastrophe, and bring the harmony back to the kingdom. Play as Flat, a 2D hero with the ability to change shapes to beat his foes and survive in this inter-dimensional chaos. In you quest to retrieve the stolen jewels, you’ll have to overcome obstacles and enemies, solve puzzles and fight strong bosses. Are you ready for the challenge?

After a nice cinematic that introduces the player to the story, you immediately begin your quest which starts at the palace. This is to teach you the basics in a friendly environment before you come across the enemies that lurk in other territories. The map, unlike the kingdom and characters, looks 3D and every time you finish a level, a new location appears behind the clouds that cover all unexplored places. 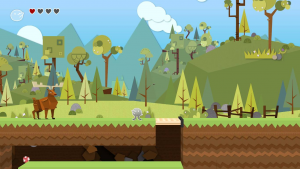 Controls are simple to get used to as is the gameplay and mechanics. You press E to interact with other characters (knights, civilians etc.), and E, W, Q to change your shape. You see, your character, Flat (you can guess why he’s called that), can change shapes and turn from circle, which is his default shape, into a triangle or square. You must be wondering “what does changing shape has to do with advancing in the game? Well, the answer is that each shape has a unique ability and you need to know which shape to use to overcome obstacles or fight enemies. As a circle, you can double jump, as a triangle you can run and as a square you can break the ground under you and move masses to open/create paths. Also while as a triangle and circle you can surface on the water, as a square you sink and that’s important for finding items and passages underwater.

The life bar is at the top left of your screen and I love how the bar’s shape changes depending on the shape you have. Details like these are always a pleasure to notice. If you run out of life you have to start from the beginning of the level or from the last checkpoint, which, mind you, are all far from each other. In bosses you start right before the battle begins. Every time a level begins you will notice that there is a seller that asks if you want to buy lives for 200 coins. Collecting coins is not hard but having enough to buy lives will take some time. 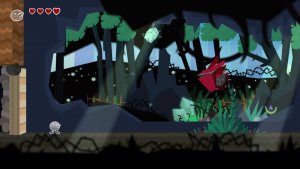 The bosses are huge and scary and they need smart thinking to be defeated. More specifically you’ll need to first avoid the attacks and then use an opening to land a hit with a combination of moves like starting your attack using the unique characteristic of a shape and finishing it with another. It’s challenging and frustrating at times because of how strong the bosses are. Their attack patterns could give you a headache due to how much they last before allowing you the chance to fight back. I had to fight some bosses over and over to finally defeat them, but hey, that’s why they’re called bosses, right? There are a few puzzles to solve too, side quests, and you’ll also be able to unlock new abilities for Flat (like turning into a shuriken when you run as a triangle). But the main core of the game is still overcoming obstacles and attacking enemies.

Flat Kingdom is available on Steam and Humble Store since 7th April for only $7.99. It is totally worth the price and definitely a game that you’ll want to play again and again. You can also purchase the steam key + artbook/soundtrack for $10.19. The music is composed by the legendary Manami Matsumae who was also the composer of the classic game Mega Man. 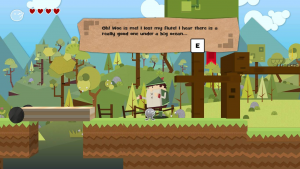 The art of Flat Kingdom is very unique and charming. The environments look fantastic and I love how there is always something new to see as you advance. Beautiful vibrant colors and variety depending on which level you’re in, as well as cartoonish characters (both friendly and foes) create an amazing result. I loved the way the palace was designed and the bosses were really distinct each one from the other. The music is not something that easily stays in your head but it is fitting and joyful.

Flat Kingdom is a platformer that is perfect for anyone who is looking for something unique and fun. It has all it takes to thoroughly enjoy a game and it certainly takes 2D platformers to a new level. It is exciting and challenging although frustrating at times. All in all, Flat kingdom is a game that knows how to keep your interest going and its replay value is high. Let us know your thoughts in the comments below.

Flat Kingdom screenshots (above) and trailer (below)

Fat Panda Studio is a company based in Yucatán, Mexico. In the past they have created mobile games as Ghost Apocalypse with RCK Games, and Lobo with Shotguns, but Flat Kingdom is their first hardcore gamer title publishing in steam game and also with a ps4 port. You can visit the official site for more information: flatkingdom.com.

#windows #games #review #steam #humble #flat kingdom
Comments (0)
< PREVIOUS ARTICLE
WhatsApp Adds Encryption, but It Won't Be A Whistleblower's App of Choice
NEXT ARTICLE >
Game Review: Can you make it down the Mars Mountain?