Home
Articles
Game Review: A Hat In Time is the craziest experience! [PS4, Xbox One, PC]

Game Review: A Hat In Time is the craziest experience! [PS4, Xbox One, PC]

In May 2013, a small, newly-built studio started a Kickstarter to develop the game "A Hat In Time". They managed to collect almost $ 300,000 (10 times more than the original goal) and after many, many delays that took years, A Hat in Time has finally arrived, and it looks awesome. Let's take a look at what it has to offer.

The story is so random and insignificant, that won’t matter at all while you’re playing. All you need to know is that you have to collect magical hourglasses that are scattered in five separate worlds with about six-seven missions each and that they change their appearance depending on the sub-mission you have selected.

On the way, you will meet the chef's mafia, a cinema studio in which only birds play and direct, a ghost-type that makes you slaves in exchange for your soul and more for you to discover. The "villain" of the game, Mustache Girl (…yes, I know), who at first is good, suddenly gets angry with Hat Kid and becomes a rival who wants to use the hourglasses to travel in time. Note: there is no time-traveling experience in the game to my knowledge. If you got confused, you're on the right track. 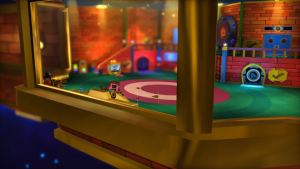 Hat Kid's moves will impress you with their flow and ease. You feel that you can easily make triples and quadruples jumps and that you do not have to be careful at all. You don’t have to watch where you are going, because you do not have to be careful, so you may get lost sometimes because of that. The camera fortunately does not make it difficult in general, checkpoints are everywhere and life span is very generous. It's definitely not a game for those who are looking for something that will push their limits. This ease sometimes ends up in sloppiness. Most of the items you collect on the slopes, including the "coins" you use to make badges that give you new powers, are easy to find. Especially since there is no list that tells you what you have gathered on every level, not even the secrets, after a while the search becomes a bit meaningless. Another thing that I want to point out is the use of hats and badges. Both give extra strength so I don’t really understand what’s the difference between the two. With this in mind, I expected A Hat in Time to be a cheap production. And I am more than glad that this is not the case at all.

How random the world of A Hat in Time is, is also apparent in the variety of missions. In one you have to fight the chef's mafia chief (I have no idea what kind of mafia they are or what is their purpose), in another to solve the riddle of a murder on a train, or in another to explore a haunted house (at which point the game turns into a real horror game) and many more. There are also small "time rifts", which are hidden in the levels and are platforming bits with geometric shapes suspended in the air. The variety of missions leaves no room for feeling bored, and they are in fact extremely fun and enjoyable. 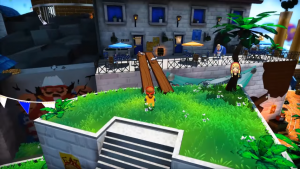 The graphics are pleasant, though not amazing. And the BG music is very good, with a wide variety of tunes. But what impressed me the most is the detailed sound design and the fact that all dialogues have voice over. There is even a badge that makes all the characters talk weirldy, but the accent and quality of the voices is something I certainly did not expect from a title that theoretically cost less than 300,000 dollars to be developed.

Yes, A Hat in Time has its problems. First, it's small as it will take less than 10 hours to complete everything. Also, animations are cool, especially in battles with bosses, but some bugs make their appearance at the worst points. Some choices about the design and movement are misplaced. But the game is crazy, unexpectedly fresh, very funny without being annoying, it flows pleasantly with nice controlling and takes risks. It is not perfect but is clearly superior than I expected and with a lot to offer. If you like platformers, it's worth giving A Hat in Time a chance, especially as time goes on and more stretch goals are included in the game, such as co-op. Let us know your thoughts and impressions in the comments below.

Download A Hat In Time for PC on Steam here.

A Hat In Time screenshots (above) and trailer (below)