nVidia's latest line of graphics chips saves enough energy to keep gaming laptop batteries charged longer than ever before, all without sacrificing gameplay performance. The new GeForce GTX 800M series is equipped with an innovative feature from nVidia that is being called “Battery Boost.” This proprietary technology allows batteries to stay charged for up to twice as long as previous batteries on the market.

Of course, the nVidia GTX 800M chips are not only set to unveil improvements in battery life but will also offer significant leaps in performance with some of the chips offering speed increases of up to 60%. On average, the GT 830M and GT 840M graphics cards should be up to 35% faster than their predecessors and about 4 times more efficient than their leading competitors, all while using a comparable amount of power. On the other hand, the GTX 850M, 860M, 870M and 880M offer varying performance specs, with the GT 830M and GT 840 being the fastest in the bunch.

With so much power and energy-saving capabilities under the hood it is not surprising that many tech enthusiasts are anxiously awaiting the release of the exact specifications. Unfortunately, we'll probably have to wait for the first GTX 800M chipped notebooks to be released before we'll get a chance to see just how much of an improvement they really are. 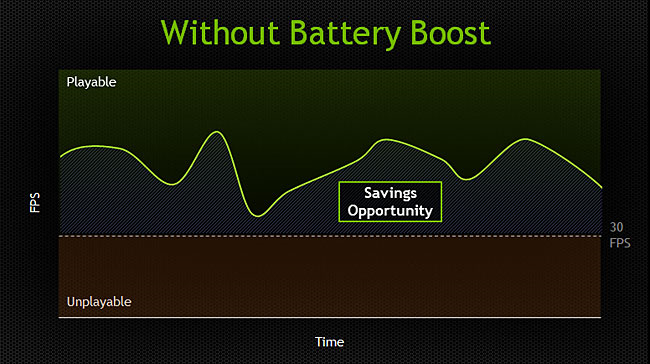 So what's the big deal about a graphics chip that increase battery life, and how much of a gain are we talking here? Well, apparently the technology in these new graphics chips could set the standard for future notebooks, as they're said to be capable of increasing the battery life of a gaming laptop by up to 100%. In other words, your gaming laptop will last up to twice as long on a single charge, so the portability of all nVidia-equipped laptops will be drastically enhanced. Lack of portability has been an issue with gaming laptops for many years, as a conventional gaming notebook can only last one to two hours on a full charge during gaming activity (only a few hours while web browsing).

The new nVidia chips are programmed to automatically optimize RAM, CPU, and GPU management in real-time after a targeted frame rate is set for the game being played. Furthermore, the GTX 800M series chips can increase power usage during performance-demanding activities while reducing power output during less intensive periods of gameplay. The ability to regulate and limit power consumption makes it a true power saver in comparison to other graphics chips that always run at full power whenever active.

The new line of graphics chips will also come equipped with nVidia's ShadowPlay and GameStream technology, so users will be able to record and stream live gameplay footage from their laptops. Furthermore, the chips themselves are expected to be twice as light and twice as thin. These size changes will have us seeing gaming laptops that are half the size with twice the battery life.