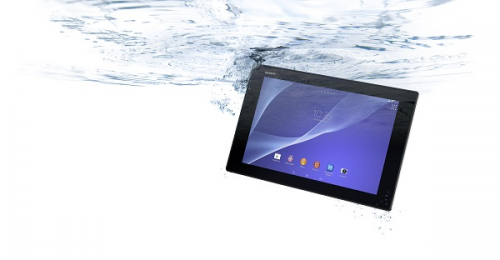 Sony Re-establishing its Presence in the Portable Device Market

Many tech analysts believe that this new and unique tablet is an effort by Sony to make a comeback after taking the backseat to companies like Samsung, Apple, Google and other major players in the portable electronics industry.

Not surprisingly, the Z3 may just be impressive enough to rejuvenate sales for a tech giant that appears to be struggling to keep up with competitors. In fact, the introduction of a waterproof tablet may be just what is needed to attract the attention of a very hard-to-please mobile device market.

Okay So Its Waterproof, But are the Specs Worthwhile?

The Z2 is faster, thinner, and lighter than its Z1 predecessor, and with a completely waterproof casing it truly is in a league of its own at the moment. Furthermore, the tablet boasts a sizable 10.1 inch screen with a 1920x1200 aspect ratio that is capable of displaying resolutions of up to 4k.

It's also pre-loaded with Sony's proprietary TRILUMINOS graphics software that enhances and broadens colors to make media as life-like as possible. It is worth noting that Sony has plenty of experience maximizing the graphical potential of hardware thanks to their development of the BRAVIA TV line.

As far as performance goes, the Z2 is well-equipped with a 2.3GHz Qualcomm Snapdragon and 3GB of RAM. To top it off, the device has an 8 megapixel camera that can capture video underwater.

The front-facing speakers pack a pretty powerful acoustic punch, so the sound waves travel towards the use – unlike many mobile devices that strangely place the speakers on the back of the device blasting away from you and disturbing everyone else.

The size of the tablet is yet another impressive area, with some reviewers saying that it feels as though you could easily snap it in half. However, because of its practically impenetrable casing the Z2 tablet is actually one of the most durable mobile devices ever made.

There is a very low likelihood that you could crack the screen or break the interior components by dropping it – the same can't be said for the iPhone and iPad, as an industry has arose out of repairing cracked touchscreens.

How Waterproof Is It Though?

When we say waterproof we're not just talking about being able to accidentally spill some soda on it here and there – it can actually can handle being deeply submerged for long periods of time. Imagine the possibilities – you could even use it as an underwater navigation tool during a scuba diving adventure.

When you compare the Xperia Z2's waterproof capabilities with the most popular available alternative – a third-party waterproof pouch – it becomes obvious that the Z2 may be the only sensible option for tablet users who want to safely and comfortably enjoy their mobile entertainment while floating through their pool sipping margaritas.

#news #android #sony #tablets
Comments (0)
< PREVIOUS ARTICLE
Mario Kart 8 Coming on May 30. Nintendo Releases a Teaser
NEXT ARTICLE >
Google Planning to Release a Nexus Smartphone That Will Cost Less Than $100 Without a Contract