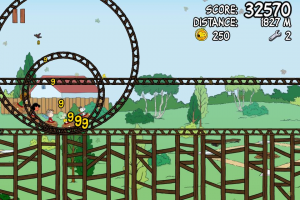 Snoopy has been a part of our childhood, be it in the form of a comic book character or an animated cartoon character, and I’m sure most of you look back at it with nostalgia and feelings of attachment. Therefore it is no wonder that many game app developers have created games based on this beloved character and his company. Snoopy Coaster (by Chillingo Ltd) is a simple, lighthearted game that matches the comic/cartoon’s atmosphere, made by the people behind Cut the Rope, Robbery Bob (review), and many more games.

The plot is simple: Snoopy, Charlie Brown, Linus, Lucy and Peppermint Patty are on the wildest rollercoaster ride ever and they need your help to go as far as possible. 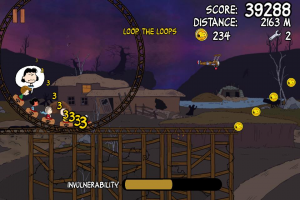 Snoopy Coaster is an endless runner on a roller-coaster and the gameplay follows the pattern of most games of this kind. The player must drive to different tracks by jumping, in order to avoid falling to the ground. The tracks come in all kinds of shapes, some of whidch are actually floating on air. You must also jump to collect coins or smash into kites, balloons, and birds that will appear in your way and increase your score. Power ups also show up occasionally and give you various skills, such as temporary boost or immunity to damage.

Levels change quite often, but since this is an endless runner you are destined to lose at some point. Nonetheless, the game allows you to continue were you left of, or better yet, where you fell from, without costing you anything, two times in a row. If you fall a third time then it is game over, unless of course you want to spend currency to continue. With the coins you collect you can buy upgrades and customize the coaster. There are also trading cards and comic books to unlock by collecting the required items shown in the Collectibles.

The graphics are 2D and the art is beautiful with official character designs and reminiscent of the comics.

The music is fun and playful and a great addition is that the characters speak, which adds to the enjoyment and to the feeling of nostalgia.

Snoopy Coaster doesn’t try to be something that it’s not. From the beggining, you know you’re in for a (quite simple) endless fun game, with nothing amazing to make it stand out. It is definitely enjoyable however and a wonderful treat for Snoopy fans.