Home
Articles
Robbery Bob: The man of STEAL comes to steal your attention

Robbery Bob: The man of STEAL comes to steal your attention 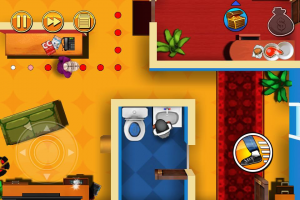 Robbery Bob (by Chillingo Ltd, Freemium) is not a new game, but its latest update came out only a few days ago and out of nostalgia I played it again and got addicted to it for one more time. This game has been developed by the same people who brought us the highly successful “Cut the rope” game series and that is insurance enough for those of you who haven’t played RB.

Robbery Bob tells the story of a skillful yet sort of silly robber, Bob, who got caught during a robbery and earned a place to jail. One day though, or night can’t be sure, someone wearing a coat and big hat helped him escape. Of course he had an ulterior motive and didn’t do it out of the kindness of his heart! In order for Bob to pay his debt to the strange man, he has to use his “ninja skills” (he calls them like that, it’s not my fault), to get into houses unnoticed and steal the items that the strange man asks him to. And that’s how our adventure with Bob begins. 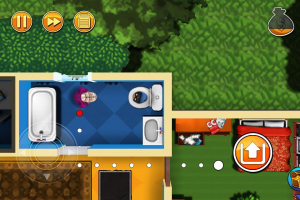 After the cinematic that explains the story as it was described above, our burglar arrives together with the strange man in front of a house. There the strange man tells Bob what he wants to be stolen and a silly dialogue takes place. That’s basically how every level begins.

Afterwards, you guide Bob into the house and to the treasure’s room, while trying to avoid being noticed by the residents. The movement controls appear at the bottom left, while the “sprint” control is on the bottom right. There are two ways to walk: 1) you walk slowly only by tapping the movement controls, or 2) tap and hold the sprint button while walking to activate running. Now, please keep in mind that when you sprint you make noise and the residents hear you and come your way. Also, after using sprint once, you have to wait a few seconds for it to load before you can use it again.

When you walk slowly you can pass behind or next to a person without them noticing you, but if their face looks your way they will obviously see you…they’re not that stupid! If you are noticed, two things can happen: 1) they will call the police and a cop will show up to kick your butt and arrest you, 2) the residents themselves will kick your butt.

To avoid being caught if noticed you can hide to another room and close the door behind. The policeman won’t go after you that way and the residents as well. Leaving a door open makes residents suspicious and they’ll come your way so make sure you close them. There are also a few places that you can hide like a ninja, such as a box or…the toilet..When you use your ninja skills no one can see you. 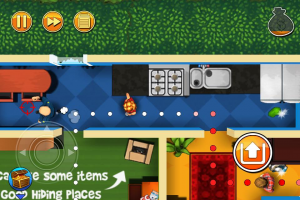 Also, the walking residents follow a pattern every time they move, i.g. moving only on the line of dots at the ground and staying at a spot without moving for a few seconds. Take advantage of this to move back and forth without being seen.

Apart from stealing the item specified by the strange man, you can loot other items too. To be able to tell which items can be collected, look for sparkling objects. Those are loot.

After you complete a level you are moved to a map that shows in which house you are and moves you to the next one.

The first map represents the first chapter of Bob’s adventure. When you clear all houses, sorry I meant levels, a new chapter will be unlocked and a new story will begin.

You can zoom out to see the full inside of a house and were each resident is, by bringing two fingers together and tap on the screen to go to normal view again.

There are a total of 3 chapters and then you can unlock others such as the bonus, challenge, extra chapters and a few more. I really wish they offered more story chapters because it’s hard to stop playing once you start and you end up clearing most levels in a matter of hours, few days top. 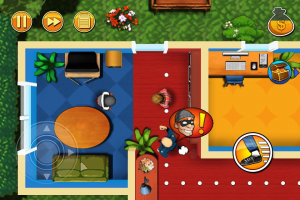 Another thing that kinda bugged me is that you can’t scroll to check other rooms when you’re in normal view. You can only do that when you zoom out and that’s a bit annoying and dangerous because while you change from zoom in to normal and vice versa a resident could approach you without noticing.

The objective is to grab the treasure and run to the nearest exit.

There is an IAP bonus that helps you escape when you ae in a difficult position, by following your shadow. It is indeed helpful but in no way necessary to clear a level.

The controls work extremely well and function really smoothly. You can move up, down, left and right by tapping and moving without removing your finger. 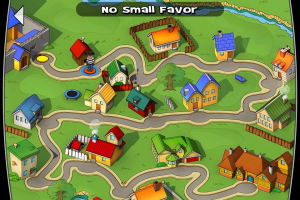 As I mentioned earlier the IAP is not a decisive factor to win. In the inventory you have a variety of options such as Abilities, Utilities, Outfits and Packs. To activate something from the list you chose you spent coins you collected from each level. Some items are cheap while others cost a lot of coins. As you probably already guessed, you can get plenty of coins by using IAP. But you can buy enough stuff in reasonable prizes without spending any real coins.

You can get coins for free by signing to FB, or liking the developers’ page on FB, for following them on Twitter or subscribing to their Youtube channel. Each of these actions rewards you with a total of 100 coins which is a lot.

The graphics are not perfect but that doesn’t affect the enjoyment at all. At least it didn’t bother me at all. They could be better but the gameplay is so fun and challenging that it hardly leaves any room for nit-picking the graphics.

As far as the music and sound effects go, I think the game would not be the same without them. It is not game that should be played in mute. This sneaky feeling and nervousness to escape will disappear if you mute so make sure you have it on every time you play.

Robbery Bob is a great game that although old still makes a difference and offers something fresh in a period were most game types are runners and puzzles. My only complaint is that it is not updating often to offer more chapters and leaves you with a feeling of longing once you finish all existing ones. Of course you can always start over and make perfect scores and it will still be fun, but nothing beats new adventures and challenges.

Give it a try and you won’t regret it!

Note: The newest update brought the chapter “Winter” but there have been complaints by players that it crashes. I haven’t unlocked it yet to try it and see if it is true but keep that in mind when you unlock it. Hopefully they’ll fix this issue soon.

Robbery Bob is available for both iOS and Android.