If you're like the rest of the millions people who play Pokemon Go (apparently the exact number of daily users is debatable), chances are you get pretty upset when the server is down. Well there's great news for you serious Trainers out there – the Hooks app, which is known to provide mobile “notifications for everything,” has added a feature that will notify you when the Pokemon Go servers are down and when they're back up again. This is a huge relief to many of the game's players because it means they no longer have to keep checking back every couple of minutes to see if they have a reason to exist again. 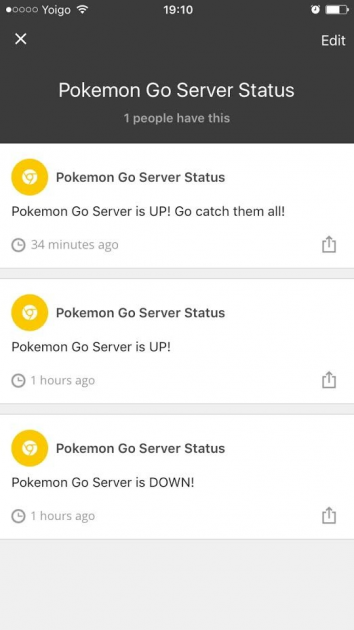 The creator of the Hooks notification app, Oleg Kozynenko, has stated that there was a tremendous demand for the feature among existing users, and given Pokemon Go's recent boom in popularity and media visibility, it was fitting to add the new capability. Besides, if Mr. Kozynenko didn't add the feature then it's likely that another app would eventually fill that void, thereby stealing a percentage of Hooks' users. Judging by the sheer dominance of Pokemon Go, it wouldn't be wise to let that many people switch from your app to a competitor.

Great Publicity for the Hooks App

One has to wonder whether Oleg added the feature to satisfy existing users or to draw some added attention to Hooks – probably a combination of both. After all, anybody with access to the internet knows that Pokemon Go has literally become the most popular mobile game in U.S. history overnight. It's even more popular than Netflix and Tinder right now! The again, it's not like the Hooks app needed any more popularity for itself, as it is already sending out more than 2 million push notifications a day.

How to Setup the Pokemon Go Server Notification in Hooks

The Hooks app is available for both Android and iOS. Simply download it from Apple's App Store or the Google Play Store. Once you're in the interface, search for “Pokemon Go” and select the “Pokemon Go Server Status alert” notification. From then on you'll receive a notification every time the server goes down or comes back up. That's it, now you can actually do something else other than refresh the game every minute when the server is down! You're welcome.