How To Create Your Own Personal And Secure Cloud Storage Solution

Most people nowadays already use cloud services to back up data, such as Dropbox and Google Drive. However, creating a personal cloud storage is not difficult and comes with several advantages, like faster speed, unlimited storage space, and most importantly, there is no need to upload valuable data to third-party servers.

The biggest and most significant difference of a personal cloud storage solution with a commercial one is the controversial issue of security and privacy. About a year ago, Dropbox confirmed that back in 2012 hackers managed to steal more than 68 million user accounts. The case became even more unpleasant when it was confirmed that Dropbox users' data was sold in a darknet market named TheRealDeal.

Let’s see then the most important advantages of having your own personal cloud storage solution.

Why do I need my own cloud solution?

One of the key issues in which a personal cloud is better is storage space. It is widely known that commercial services give you for free only about 5 to 15GB in most cases, with a few exceptions.

There are, of course some Chinese services that offer up to 2TB of cloud storage. However, there are other well-known companies from the same country which offer from 10TB up to... 36TB (36,864GB) to everyone. But as you can imagine, these are not exactly trustworthy, and lack decent upload/download speeds.

The power provided by the BitTorrent protocol works nicely in this case.

BitTorrent Sync (BTSync) is a free, lightweight and flexible software. Through the peer-to-peer (P2P) data transfer protocol, it allows you to synchronize files on different devices regardless of size, which you can share with others much faster than you are used to.

All files are encrypted, and there is no server or cloud service in the middle during the transfer. Moreover, there is no limit to the number of files. BTSync actually creates a personal cloud, and its only limit is the size of your hard disk. Regardless of whether you upload or download files, you can access them from any device which has this app installed.

However, the usefulness and flexibility of BTSync does not end here; you can share documents with other users in a read-only mode, as well as track new documents or files that are uploaded.

BTSync is even more useful on mobile devices. It has an excellent feature for automatic upload and backup for all photos and files in your device. The same feature exists in Dropbox and Google Drive. This way, new photos that you take with your smartphone, as well as any other file that you add to the device’s folders will be uploaded to the hard disk that you will indicate.

If your computer is turned off, all files will be synchronized as soon as BTSync is launched again, which is quite useful if you have a large external hard drive disk.

Recently, the software was acquired by the young company Resilio. CEO is the former CEO of BitTorrent, Eric Klinker. For this reason, the program was renamed to Resilio Sync; however, BitTorrent Sync is still used on the official website for practical reasons since it is more widely known. 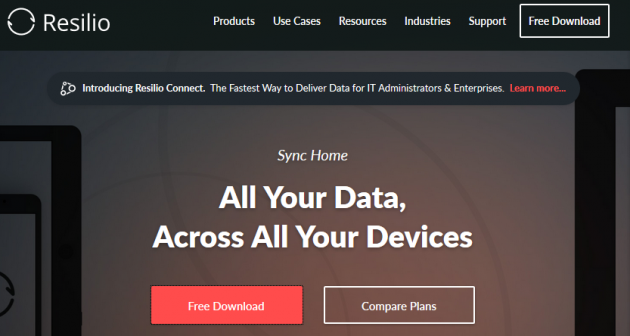 The program is available for most platforms, such as Windows, MacOS, and Linux. It is also available for Android, Windows phone and iOS, as well as NAS (Network Attached Storage) devices. In this article we will refer to the desktop version for Windows, and the corresponding Android version.

So, after downloading the installer for Windows, which does not contain any unwanted third-party programs, proceed by downloading and installing the BTSync app in your Android device.

By running the program on your computer, on the first screen that appears make sure that the first four entries are selected and leave "Install Resilio Sync as Windows service" unchecked. This is a new feature of the program where synchronization takes place in an automatic manner, without you even opening the application. However, it is recommended only for advanced users of the protocol, since special configuration is required. 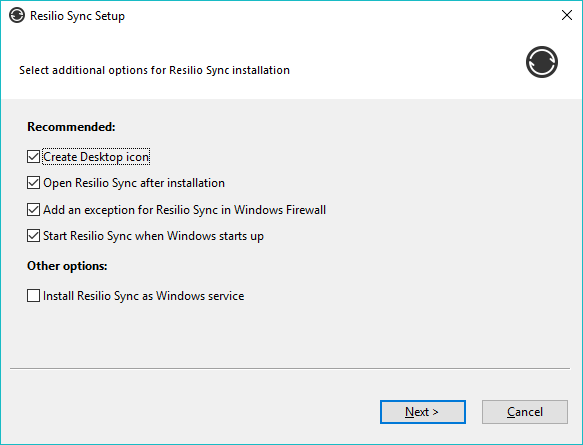 Next, keep BTSync open on the computer, and run the app in your Android device. At first you will be asked to give it the necessary rights so that it can work properly. Then, what you need to do first is tap on the "+" button and select "Add backup". 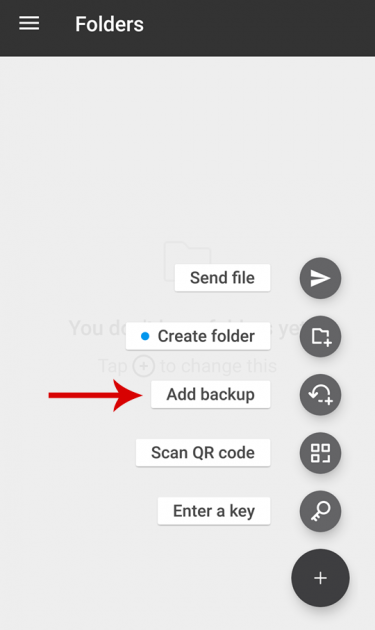 Then tap on "Add Camera Backup". 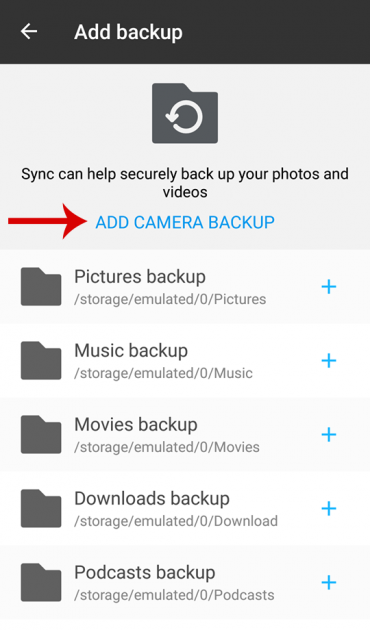 The app will then need to send a link to your computer so that the two devices can connect with each other, and the best way for acquiring that link in your computer is to use the email option, so that you send the email to yourself and open it from the computer.

Once you click on the link you received in the computer, you’ll find that the application will respond immediately. At this point, you must carefully perform two actions on the BTSync screen that opened. The first one is for selecting the hard drive that you want to store the photo backup in. In this case it would be ideal if you have an external hard disk with a lot of space. The second action is to click on "Connect". 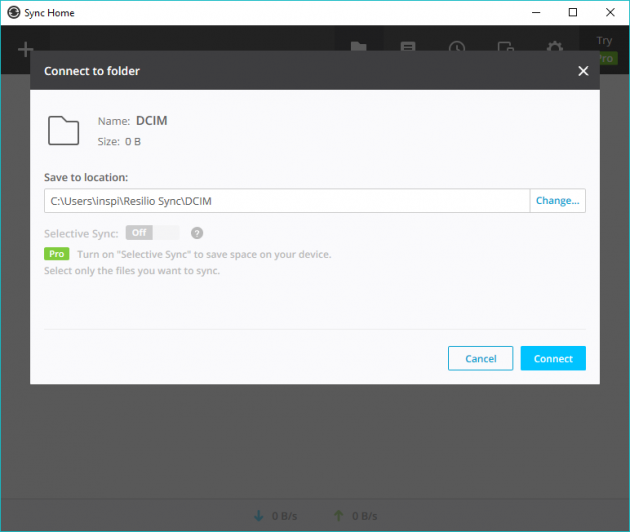 Immediately afterwards you will see that the application on the computer will require approval from your smartphone before it can proceed, thus all you have to do is go back to your Android device by tapping on the icon that resembles a bell first, and then confirm the connection request.

After the request is approved, BTSync will begin downloading data on the computer. From now on, whenever you take a photo from your Android device, it will be added to your personal cloud you created, on your hard disk. 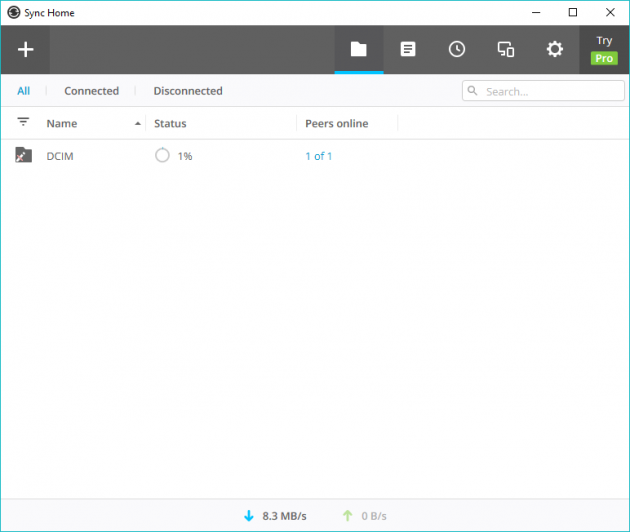 What will surely impress you is the speed at which files are transferred. For example, downloading photos with a total size of a few GBs was completed within minutes on a 24Mbps connection.

If you wish to create other automatic backups, such as for your music, movies, and downloads on your Android device, you just have to follow the same procedure that we described previously.

As mentioned earlier, if the computer is turned off, backups will be performed automatically as soon as you open it, provided that both the PC and Android clients are running. In order to overcome this small constraint that both applications are required to be open in their respective operating systems, you need to enable the "Windows service" setting that you came across at the beginning of the installation procedure. However, this is a rather difficult task and is not recommended, since it can even damage your connection if you don’t know what you’re doing.

The second way for avoiding this constraint is buy the Pro version that costs $40. Resilio gives you chance to try it for free for 30 days.

As soon as you open BTSync, the first thing that you need to do is select the folders that you want to sync with your other devices or friends.

At this point it should be mentioned that the program only synchronizes folders and not individual files. However, you can add all the folders that you have on the computer, since there is no limitation. 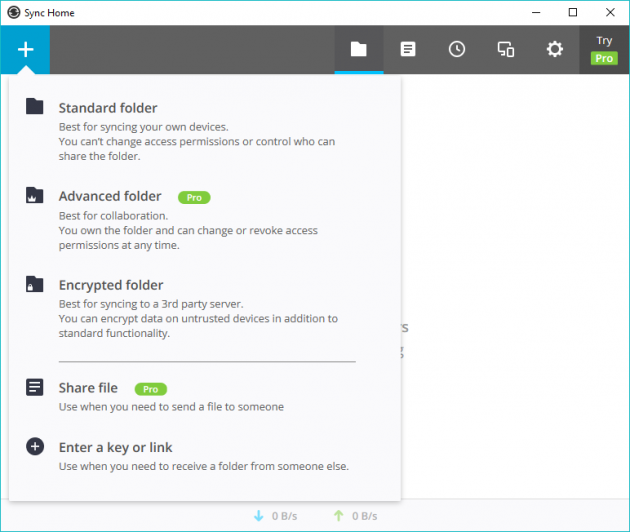 Once you have selected a folder, you will be presented with a few options that you can make regarding file accessibility and link duration, as well as a copy and email feature for sharing the link. The recipient’s device will begin synchronization once he opens that link. 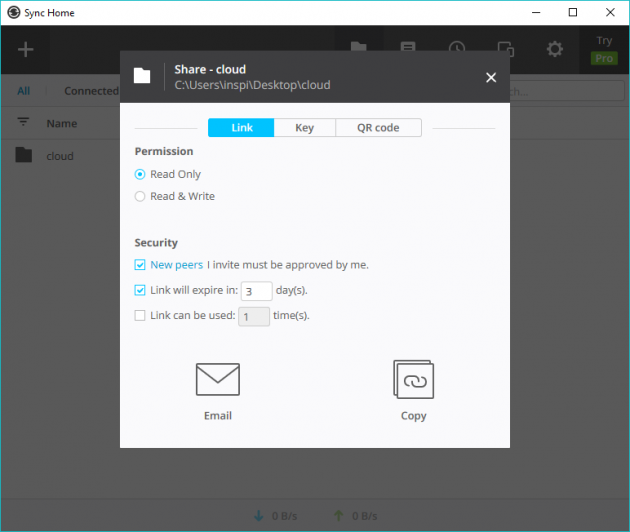 So, as you can see, while there are a few disadvantages in having your own personal cloud solution (automatic backups require the application to be running in all devices, at least one computer has to be running during sync, and no individual files can be synchronized- just folders), it is a decent option for those who wish to have the whole thing under their own management from start to end.

If you have any thoughts or suggestions, let us know in the comments section below!