DotEmu is known for bringing back to life beloved games that have been forgotten for decades by many fans, like Sanitarium, Raiden Legacy and more. At the same time, they also make remarkable remakes of games like the unexpectedly entertaining Pang Adventures. Their new masterpiece is the remake of Wonder Boy 3 which we will be reviewing today.

Wonder Boy: The Dragon's Trap follows the end of Wonder Boy 2: In Monster Land and begins at the castle of the mechanical dragon who terrifies the Wonder Land. In fact, the game begins as the end of the previous game, but when you have just defeated the dragon, a curse falls on the hero and transforms him into a lizard-man. This curse cannot be reversed until you find the salamander cross. To do this, you have to beat the various dragons in the world, and the Vampire Dragon last. 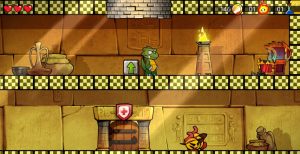 Wonder Boy: The Dragon's Trap is a 2D platformer and you play in five different forms: lizard-man, lion-man, mouse-man, hawk-man and piranha-man. Each form has its own attributes, and it has different statistics like attack, defense and charm. For example, mouse-man can climb special walls made by mouse blocks, the lion-man can break stones that are on the ground and is one of the strongest forms, piranha-man can swim while he has full grip and hawk-man can fly and gain access to points that other characters can’t. You can also be simply Wonder Boy (or Wonder Girl), but you must complete the game at least once before being able to do that.

From there on, the game becomes a little more RPG. Instead of having separate levels like other 2D platformers, it has a single world with a small village as a hub. From there, and if you have the right form, you have access to various parts of the world. Here is the first problem that has to do with the structure of the title. What is a bit irritating is that the game doesn’t give clear instructions of what you are supposed to do. This, of course, also applies to some items and to the way the charms, which are found scattered in the game, work. For example, you discover that you can break the stone blocks because you got the thunder ring. 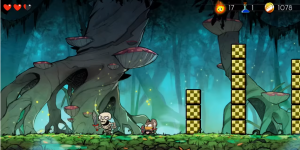 Money is also something quite important in the world of Wonder Boy, in the sense that the best weapons, and some that you need to be able to advance, are in both open and hidden stores. But you have to collect enough money to buy all the weaponry and to raise the defense and attack of your character, because some areas have incredibly difficult enemies that are equally strong. To collect money all you need to do is beat enemies. Everything you defeat leaves items behind it. Most of the time they are coins or money bags or more rarely hearts that fill your HP and even more rarely an item for your special attacks. Money is also found in the secrets of the game and some are "replenished" when you go to the main menu and load. So you basically have to turn the game’s world upside down to collect as much as possible so you can move on.

Wonder boy: The Dragon’s Trap is available on Switch, PS4, Xbox One and PC on Steam , GOG and HumbleStore. 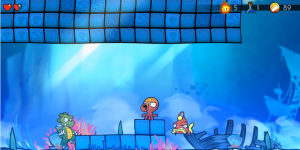 Everything has been redesigned from scratch and by hand by talented artists and animators. The attention given to the designs is incredible, from the character styles that all have different animations, to the way the enemies and bosses move. Everything in the visual field is based on the original sprites and is always recognizable by those who have played the original Wonder Boy 3. In terms of backgrounds, the creators have shifted not only by designing new gorgeous scenes that come alive with parallax scrolling, but also by importing "historic" elements into the world. You see for example, monuments and statues of old heroes and small details in the decoration that testify to the age of buildings and sites, giving more depth to an otherwise 8-bit world.

Wonder Boy: The Dragon's Trap does not take more than a few hours to complete, since it's generally a small game. Even if you are trying to discover the secrets, which are a lot, it won't really take you much longer. But, beyond the problems that come mainly from being based on a game from another era of gaming, The Dragon's Trap is a real treat you should not miss. Let us know your thoughts and impressions in the comments below.

Wonder Boy: The Dragon's Trap screenshots (above) and trailer (below)