Your internet speed depends on many factors, the main of which is your connection. In many cases, however, the connection may be limited by your operating system settings. In this guide you can see how you can achieve faster internet speeds by configuring the TCP/IP settings appropriately.

TCP/IP stands for Transmission Control Protocol/Internet Protocol. It is a collection of communication protocols on which the internet, and networks in general, are based.

The TCP/IP structure has two layers. On the one hand, the Transmission Control Protocol (TCP) undertakes the role of splitting the message you are sending to the internet into small packets, as well as join small packets you receive from the internet.

On the other hand, the Internet Protocol (IP) deals with each packet’s address, so that it reaches its correct destination. Most of you know this protocol as the IP address.

In other words, the TCP/IP protocol defines how your connection data is packaged and transmitted.

How to get faster internet connection speed?

The network settings within the Windows environment are predetermined. This means that the do not automatically change according to your internet connection’s speed. However, each user has a different internet connection, with different internet speed, and different latency. So, since the network settings are pre-configured and do not depend on your connection, it makes sense to produce some kind of bottleneck in speed and latency, at least in the majority of users.

Therefore, to achieve higher internet speeds and leverage the full potential of your network, you must change the TCP/IP settings based on your connection.

Experienced users can configure these settings manually, either by tweaking the Windows registry, or by using the command line. For everyone else, TCP Optimizer is the best way for doing that.

What is TCP Optimizer?

TCP Optimizer is a free program that allows you to change settings in regards to the TCP/IP protocols. With its help, you can easily configure several advanced settings without having to manually intervene in the registry or use the command line.

The only thing you have to do then is head to this page and download TCP Optimizer by clicking on the link of the most recent version. At the time of writing this article, the latest version is 4.06, released on September 2016.

After downloading the application, you must run it with administrator privileges, so right-click on the executable and select Run as administrator.

The first time you open the program, you’ll probably think that it’s going to be quite a complicated process, since its interface is full of settings and buttons. However, things are simpler than they seem. 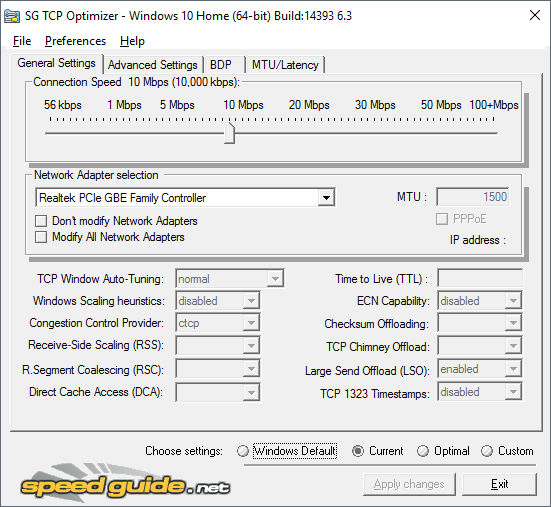 If you belong to the category of people who want everything ready with a single click, or if you just don’t want to deal with all settings individually, then TCP Optimizer was created just for you.

All you need to do is define the maximum speed of your internet connection in the Connection Speed field located at the top of the window. 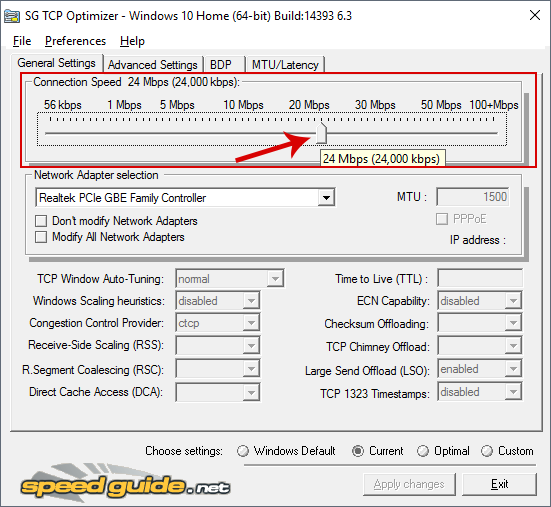 Note that you should set the theoretical maximum internet speed of your connection, not the exact maximum speed you can reach. For example, if you have a 24Mbps connection, but can reach up to 16Mbps, you would change the setting in TCP Optimizer to 24.

After changing this setting, select the Optimal option located at the bottom of the program, which will set the optimal settings for your connection automatically. Then, click on Apply changes. 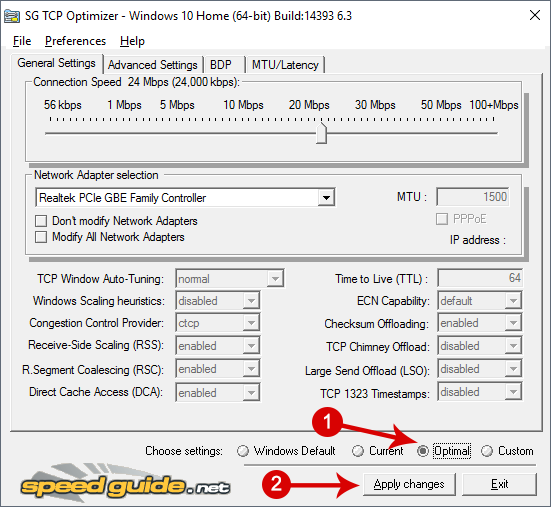 In the window that will open, check the Backup and Create Log boxes, in order to let the program create backups of your previous settings for future reference, and then click OK. 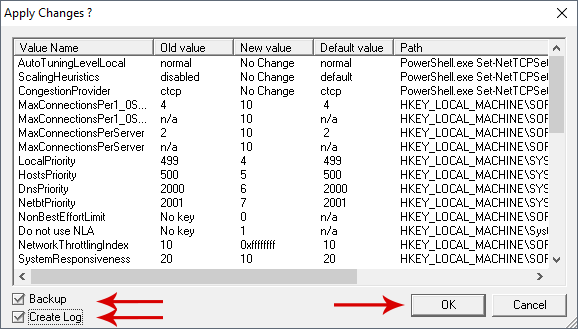 For the changes to take place, the system has to be restarted. If you want to restart immediately, click Yes on the message that appears, otherwise, to manually restart it yourself later, click No.

And this concludes the process of making your internet connection faster.

If you wish to know what each setting in TCP Optimizer does, take a look at its documentation.

Starting from the General Settings tab in TCP Optimizer, you can view the most basic settings. Next is the Advanced Settings tab, which includes more advanced options.

To be able to tweak any setting manually, you must select the Custom option first, located at the bottom of the window. 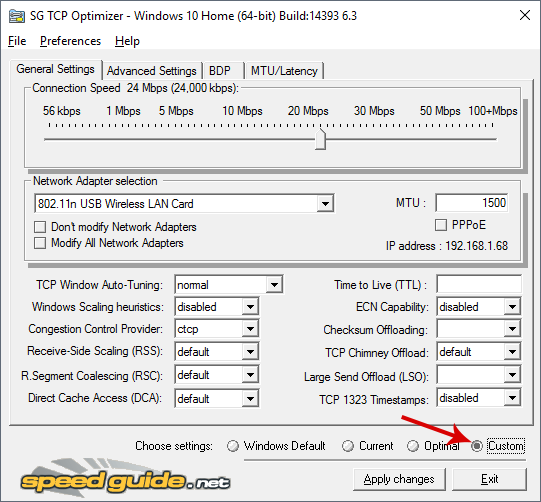 In the advanced settings tab you can automatically apply various changes in the registry so as to improve performance in online games. For example, with a single click you can disable Nagle's algorithm or the Network Throttling Index, which we described in a previous article:

How To Optimize Performance in Games By Tweaking Windows 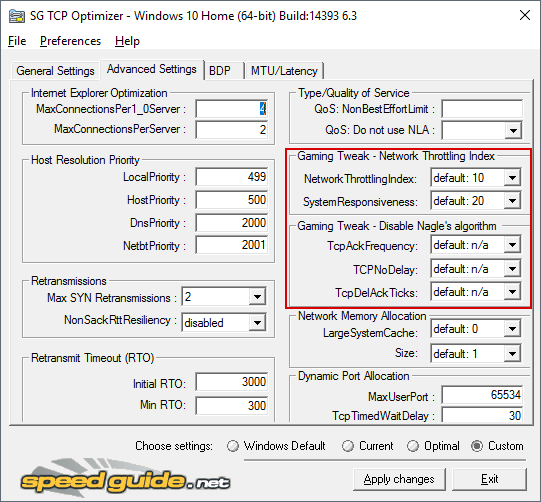 Keep in mind that these settings should only be changed manually if you are certain of their functionality and side-effects.

If something goes wrong, or you don’t see the results you expected, TCP Optimizer gives you the ability to restore the default Windows settings in various ways.

For starters, you can click on the Windows Default box located at the bottom of the window, select Apply changes, and restart the computer. 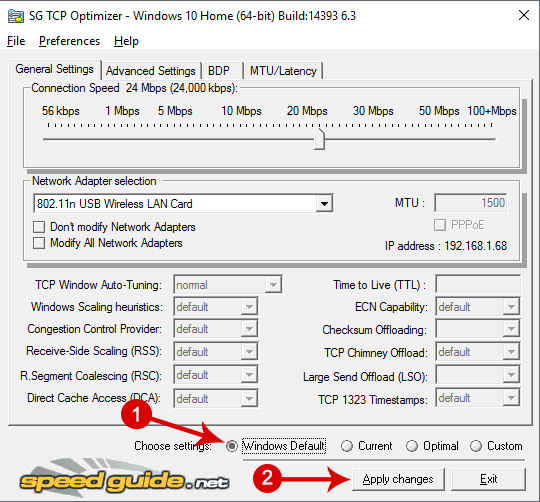 Alternatively, the application allows you to create backups of the current settings. To do that, open the File menu and click on Backup current settings. The backups are stored with the .spg extension in the directory where you launched TCP Optimizer. 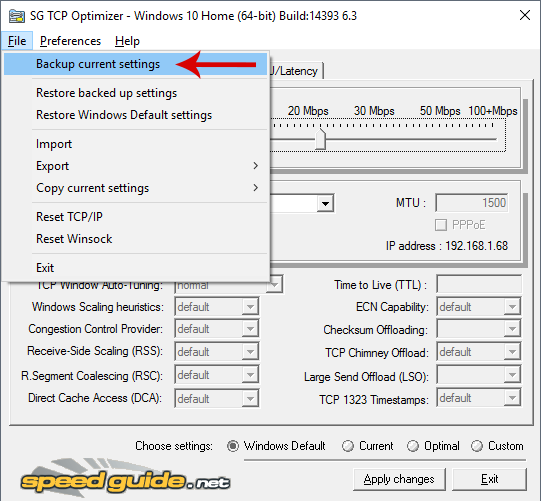 Then, by clicking on Restore backed up settings from the File menu, you can restore the backups you have created anytime. 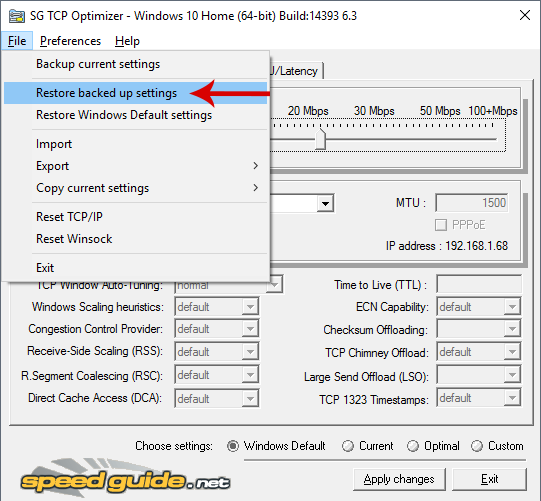 Also, note the Reset TCP/IP and Reset Winsock options in the File menu. Oftentimes, you might not be able to connect to the internet due to errors in TCP/IP or Winsock, which can be solved with a simple reboot of the protocol or the Windows Service via the command line. 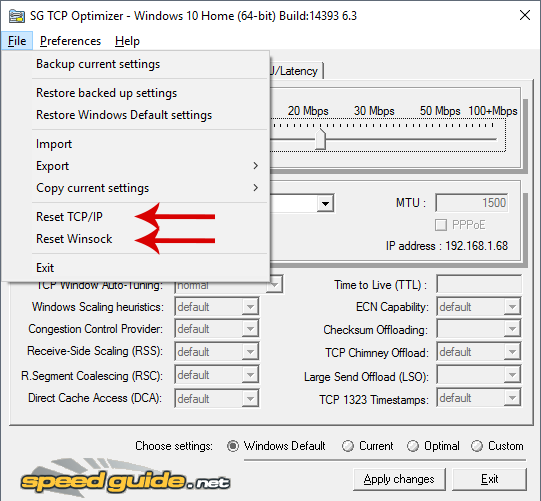 However, TCP Optimizer can save you the trouble from performing this process manually, and undertakes this task with a single click.

Hopefully, TCP Optimizer optimized your internet connection, allowing you to experience higher internet speeds than before. If you have any suggestions or problems, let us know in by posting in the comments section below!