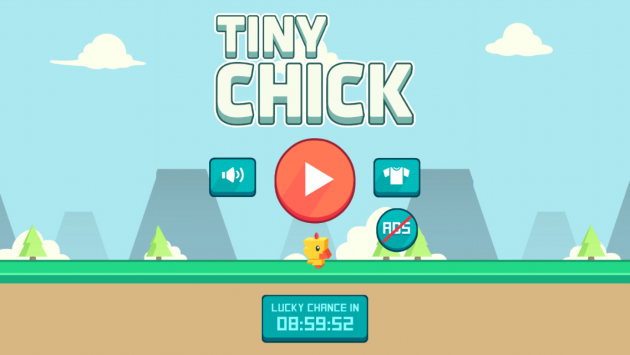 Do you remember Flappy Bird, the incredibly addicting yet extremely frustrating game about a bird trying to pass through pillar gaps? Its success was phenomenal when it was released and players would comment on how hard it was to stop once you started playing and the extent of their anger with every game over, some resulting in not so funny situations with people breaking things in their rage. The craze might be over but the trend never stopped giving birth to new games that follow on Flappy Bird’s footsteps, or better flaps. Among them, the game we’ll be reviewing today, Tiny Chick by ZPLAY, which belongs in the category of games that have a simple gameplay but are hard to master. 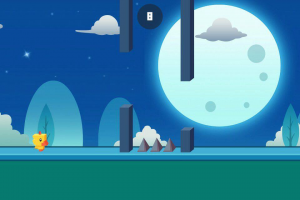 There is no actual backstory to support the game, so let’s jump straight to the gameplay. All you need to do is help the cute chick jump through the pillars’ gaps aiming for the highest score you can get. The controls are simple; you tap and hold until the line which shows the altitude of the jump reaches the desired level. Then all you have to do is release your finger and the chick will take the jump. Keep in mind that you can’t make the chick move as it is placed automatically in the position from which it will jump.

While it is easier and more carefully crafted than Flappy Bird, Tiny Chick is very hard to get used to and it requires a great attention to detail and precision for the player to set the perfect jump between the pillars. At the beginning it will be very easy to miss the target but soon your movements will be smoother. There will be cases where the chick will be too far from the next pillar and cases where it will be only a couple of steps away from it. Figuring out how big the jump must be will be very challenging and intriguing. Except the pillars, there are some other obstacles, mainly spikes between two sets of pillars to make things even harder. The satisfaction you get, however, from overcoming really hard situations is incomparable. 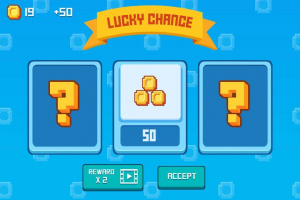 For every difficult jump you are rewarded 3 points. With these points (coins) you can unlock characters from the variety that is available in the game. Each character costs from 250 to 1000 coins and while it might seem hard to collect that much, the game offers a lucky draw card game in which you choose among 3 cards and are rewarded from 50 to 150 coins. You can take part on the draw up to 3 times but after the third draw you’ll have to wait a few hours to be able to try again. It is a fair system and also very rewarding. You can also get free coins by watching ads, or double the ones you won on lucky draw in the same manner.

As for the characters, I’m really impressed by the variety and the nods to popular comics and cartoons. My personal favorite is no one else than Kakachic, which refers to the famous Naruto character Kakashi. I fan-girled really hard when I noticed him among the other chicks! Spidey chick, Chickerman, Dino Chick and many more wait for you to unlock them and make the experience more pleasant and funny.

The IAPs in Tiny Chick are limited to an ad remover and to premium bundles in the characters’ purchases, in which you can get 3 special characters (*ahem*deadpool *ahem*) for $ 0.99. There’s basically nothing tampering with the game’s progression and both IAPs are optional and insignificant. Certainly something I respect as I have many times said in regards to the IAPs. 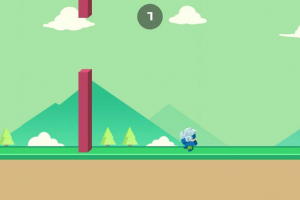 The 3D graphics looks amazing and the colors are vibrant and crystal-clear. I love how with each new game the background changes. One time you’ll be in a lovely forest and the next among the clouds. It might be daytime or you might play under the moonlight. It certainly makes the game more interesting, considering the goal is a high score so it is by default repetitive. The character designs are adorable and they remind me of the Crossy Road ones who I loved. The BG music is full of bird chirps and it is so calming and sweet that I can't get enough of it.

Tiny Chic is a lovely game for those who look for a challenging game that will test their limits and don’t mind the frustration that goes with this type of games. I personally find I far more enjoyable than Flappy Bird and I loved the mechanics and how you can take your time to think through the way to jump successfully. It is not stressing you to make a move immediately like other similar games so I consider this a huge plus in my book. All in all, it is a game worth playing despite the obvious outcome which is to lose! Give it a try and let us know your thoughts in the comments below.

Tiny Chick screenshots (above) and trailer (below)