Game Review: Test Chamber - A Pleasant Little Surprise To The World Of Puzzles

There are times that good indie games get lost in the void- overshadowed by famous developers’ creations, which sometimes are not even as good as their indie counterparts. It is then that I realize how unfair this situation is, not only for the indie developers whose work goes unnoticed, but also for us, the players, who miss many opportunities to enjoy a good game.

For that reason, it is always a delight to come across indie games, such as the one I’ll review today. It is a new puzzle game developed by M LE KRUPA & T.J LEE that only came out a few days ago, and its unique plot and attractive gameplay leave hardly anything to be desired by the player. I’m sure you’re all familiar with the phenomenon that was Monument Valley, and Test Chamber will remind you of it, but it is unique and stands on its own so don't jump to conclusions and think they're similar. 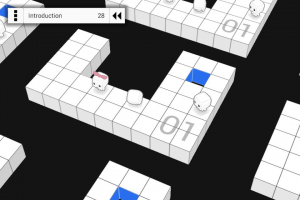 The game takes place in a place called Test Chamber. In there live many cute cube-headed creatures, trapped. Our cube-headed hero who doesn't have a name wants to escape in hopes to reach the land of legend called Infinite World. Except for our hero, there is also a girl who encourages him to find the way out, and another male character who is pessimistic and doesn't believe that this journey will lead anywhere or even that Infinite World actually exists. More characters, good and bad, appear in the way. You must discover a portal to the mysterious Warp Zone, and reveal the truth behind the Dark Stranger.

All levels take place inside a geometrical world, consisting entirely of white blocks in a variety of formations. There are gaps between them and for that reason you need to push colored cubes inside the gaps in order to use them as a bridge to reach the blocks that hold the level’s exit. Sometimes the game will make you think that it’s impossible to reach the exit but after some (or actually a lot) of thinking, you will realize how obvious the answer is. Hint: pay attention to the repeated chambers that reflect as mirrors. You can actually walk on the repeated blocks and use the cubes from there.

The game allows you to rewind back to any point you wish so there’s no game over in Test Chamber. The rewind button saved me from a lot of frustration that would have occured every time I kicked a cube at the wrong empty space, or misplaced it and couldn't move it anymore.

Other than that, there are no rules or difficulties, but as I mentioned above, finding the right way to place the cubes is challenging enough.

There are 28 levels available for free, and you have to pay $2.99 to unlock more levels and to have access to the rest that will follow. It is worth paying and you will feel the same way once you reach the “final” free level.

Other than that there is no IAP and clearing levels depends only on your skills and clever deductions. 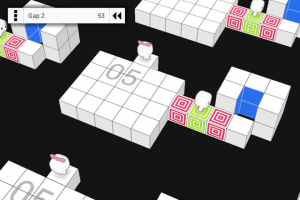 The controls are a bit tricky, especially if you’re playing on your phone and not on a tablet. It took me some time to navigate the character smoothly because it's not a tap mechanism, since the character kind of moves by himself, but instead it belongs to the category of "tap, hold and slide your finger to where you want to position him".

I’m not a fan of this control mechanism in such a tiny space like the world of Test Chamber but there is no lagging, and moving around becomes easy after playing for a while. The fact that you can’t fall off certainly helps, although the same can’t be said about the blocks. So, move carefully until you get the grip.

Normally I start this part from the graphics review and then move on to the music but allow me to make an exception this time around, not because the graphics are not good, on the contrary, they look great, but the BG music of Test Chamber is amazing to say the least. It’s so sad and sweet at the same time that it makes you wanna cry, not because it’s melodramatic or anything of the sort, but because of the feelings of sweet melancholy it brings out from the player. You won’t be bored listening to it again and again, and you will want to help the little creatures even more. It complements perfectly the plot and atmosphere of the game.

The graphics and visuals are simplistic yet as expressive as necessary. The characters look adorable and their sad and innocent features will win your hearts. The main color is white, and the monotony is handled by the green and red cubes as well as the black emptiness that lies beneath.

By all means, give Test Chamber a chance. It is an indie game that deserves our attention. It gives plenty of free content for the player to experience and learn about the game, and if you want more you can purchase it. The plot is sad and touching, the world is beautiful in its weird geometry, and the characters lovable.

All in all there is nothing negative to say about Test Chamber. Test it for yourselves and rate it!