Game Review: Super Cat Tales will be our new addiction 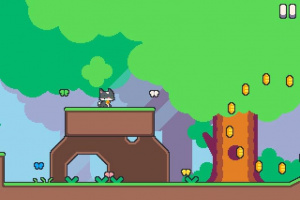 While waiting for the release of Super Mario Run for iOS at the 15th December, I found the best substitute I could ask for and maybe calling it a substitute is not even fair considering how fun and delightful it is to play and I, for one, will keep this game with me until I complete it. I’m talking about Super Cat Tales or Super Cat Bros for Android users (probably Apple didn’t want to include the game on its list while its name resembled so much Mario Bros, thus it was changed to Tales for iOS devices), an incredibly cute and charming game that every Mario fan will appreciate.

6 cute kittens were traveling on an air-balloon when some nasty creatures shot it down. Not, Alex, one of the kittens, must travel to find the rest of his siblings and go through various worlds and face dangers in order to reunite with them. Will you help the brave cat pass through all the levels and reach its goal? 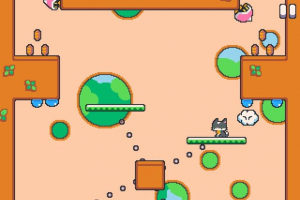 In Super Cat Tales (or Bros) you control Alex the cat through Worlds and over 50 levels with different themes and bosses at the final stage of every world. The controls are taught to you step by step and not all together at the same level which is very helpful as it allows you to master your moves slowly before learning new ones. You tap left/right to move, you double tap and hold to run and tap on the opposite direction to stop running, you walk straight to a wall without releasing your thumb to climb up, and tap at the opposite direction to make a wall jump. You also run when you want to jump on an elevated spot and you have the option to adjust the tap speed from the pause menu in case the default is not working well for you. I kept it as it is though and it is easy to get used to after a few levels.

On each level your task is to collect as many coins as you can and find the hidden bells and keys (when they are available) to get a perfect score. Enemy creatures come in all shapes and forms and describing them is hard. All of them look cute though so try not to get tricked by them. Getting in touch with them will make them disappear but will also damage you as well so try to avoid them because you gain nothing by destroying them. Of course there are friendly creatures as well that will guide you and give you advice.

If you don’t manage to collect all bells you can still move forward but when you change worlds you have to pay with bells so you always need to try hard and replay levels to find the missing bell(s). Keep in mind that sometimes they are hidden and you need to walk back and forth in a place e.g. grass to make it appear. Keys also are important to unlock doors in other levels so in the end you need to aim for a perfect score. 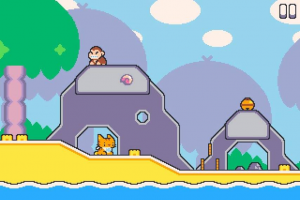 You will also come across potions that will reveal surprises for you and in addition you can use what the game calls “helpers’. These are creatures such as a living cloud that stick to your side and take care of enemies so you won’t have to worry about getting in touch with them. Sometimes the game offers them to you for free, but normally you purchase them with coins from the shop. More cats are unlocked in levels and every one has a unique ability which allows it to do things that previously you couldn’t and now you could go back to a level and use the ability to collect something you previously couldn’t.

As far as lives are concerned you are given plenty of them and when you lose you restart the level which is not frustrating at all because the levels themselves are not too long. The bosses are easy to defeat at first but of course the difficulty is raised as you advance.

The journey will take you to forests, seas, volcanoes and more. It is indeed a very exciting game with many adventures and new things in every corner. There’s nothing better than discovering such gems that stand out and give so much joy to a player regardless of age.

While Helpers can be bought with coins, coins and lives can be purchased in bundles through the IAP shop. You can also deactivate ads once and for all and also unlock all the rest kittens. Everything is optional though, and you can enjoy the game to its fullest without purchasing anything. 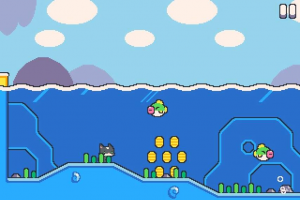 Super Cat Tales is very colorful and yet the colors are soft and smooth. It has pixalated graphics that work perfectly in this type of game and very cute designs. Every cat look different and unique and you can see the care with which each level is handled. The music is joyful and fits perfectly the retro atmosphere.

If you are a fan of Mario type of games, then Super Cat will give you great satisfaction and you will find yourselves addicted right from the first level. I wish there were more games like this available but on the bright side, the lack of them is what makes these gems pique our interest. Give it a try and you won’t regret it. Let us know your thought and impressions in the comments below.

Super Cat screenshots (above) and trailer (below)