South Park: The Stick of Truth brought the cartoon world of South Park to the world of video games, offering a highly satirical and enjoyable RPG experience. Now, South Park: The Fractured But Whole is going to continue and expand its predecessor's successful recipe, giving another direction in the story and trying to improve the gameplay.

In such a game, the most important aspect is the story and whether the authenticity and aesthetics of the series remain intact. It basically feels like being inside an interactive episode of South Park. There is an abundance of humor, ranging from farting jokes to the trademark satire on sensitive subjects. All your favorite characters are present and the character you create is a match for the world you already know and worshiped. Of course, more weight falls on the themes related to the field of games and super heroes, through a smart parody of the industry of such films. It tries and succeeds on not being politically correct and offers entertaining and extreme moments of humor. As a whole, it will surely please most of the players. I would not say that the story, especially towards the end, is as good as in the first game, but it handles perfectly the theme it has chosen to follow. 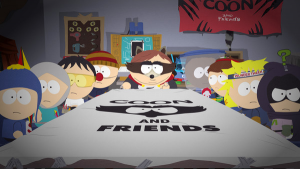 What I find most important about the story is that it is even addressed to those who have nothing to do with South Park. It manages to deliver to the player the whole philosophy that characterizes the series in a smooth way that does not require pre-existing knowledge of characters and situations and also offers something familiar to everyone: the nostalgia of childhood. What is happening in the game is that some children play as superheroes in the neighborhood which I think that this brings childhood memories to most of you and the game offers the best opportunity to fully get into the atmosphere you see on your screens.

South Park: The Fractured But Whole is a turn-based RPG. The combat system is fast, fresh and enjoyable in all its aspects. It is cleverly designed in its simplicity. It relies heavily on the space of characters, as each attack has a certain range. So the strategy lies in the correct positioning of your team's characters and the correct response to the moves of the opponents. Other attacks send away the opponents, others pull them close and others offer advantages to the team. There is also a super move for each character that produces devastating effects and you can use it only when it fills a relative bar as the battle goes on. The operating system is simple and comprehensible, maintaining the necessary depth and offering a relatively modest challenge that will not become boring. Even here, the humor and the aesthetics that surrounds the story are preserved. Maybe the battle will be interrupted because a car wants to cross the street where you fight with neighborhood children and you instantly move on the sidewalk. 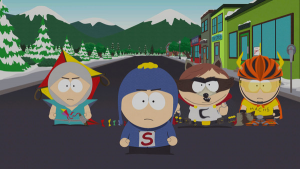 It also retains most of the elements we expect from an RPG, again with the familiar touch of South Park. You find objects that fill you with life points, get extremely hilarious summons, climb up and equip your character with objects. Most importantly, you create your character and after choosing between three different classes you can dress and evolve it as you wish. The only part of the gameplay that is a bit boring and not so fun is exploring the world, collecting supplies and solving environmental puzzles. It was probably the first time I was disturbed because the map for exploration is great. Going from one place to another and searching, doing mini-games that are fast-paced and trying to complete side-quests with objectives that we have seen countless times in other RPGs, becomes monotonous, though not enough to spoil the rest of the experience.

South Park: The Fractured But Whole is available on PS4, Xbox One, and PC for $60. It is a bit expensive as you can see. 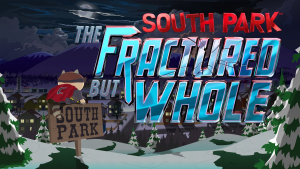 The game visually and acoustically adopts the spirit of the series on which it is based. It is awesome to see the characters, the dialogues and the special effects come to life in this way. Also excellent is the performance of the game. I didn't notice any bugs, glitches or any issue at all.

Manages to do well in what it aims to do. Of course it is not a game for everyone because of the theme and its unique type of humor, but it is meant for both South Park fans and to gamers and leaves both equally pleased. Let us know your thoughts and impressions in the comments below.

Download South Park: The Fractured But Whole for PC on Steam here.

South Park: The Fractured But Whole screenshots (above) and trailer (below)