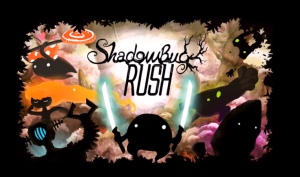 After the success of the original Shadow Bug (you can find it here), the developers are back with a new installment that has been reworked from scratch, and this time it is free and in the form of an endless runner. The new game is called Shadow Bug Rush and it is everything players of the old game wanted and more.

The premise is the same as in the original game; you play as the invincible ninja hero Shadow Bug and your job is to save your forest and everything living in it, from the evil factory that wants to destroy it, by slicing the monsters that come your way.

The control system is simple; you tap on the monster to attack and slash it until it is defeated. There are no other actions for you to perform. As an endless arcader it is inevitable that you will meet your end at some point, but your objective is to collect points by killing as many monsters as possible. Of course, monsters are not your only concern; various obstacles will make your work harder and in many cases, cost you your life, e.g. the factory’s machines with large spikes that start appearing behind you if you don’t move fast, or even underneath you. Thorny rocks and more are also in the menu so be careful when you jump. But not everything is against in this game! You can also collect loot and power ups. 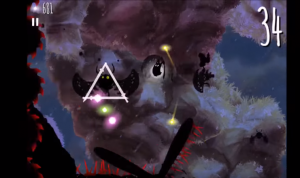 The stages are automatically generated and you start at a new place every time you play. The background colors also change to offer some variety and avoid repetition which could bore the player. You can unlock more worlds as you advance. The 1st world is the forest, and there are more worlds soon to be released.

With the points you can summon new characters to fight as, such as the Muro or the Robot and more. Each of these cost 1000 points. When you lose you are given the option to continue form the game over spot by watching an ad or spending points.

The game offers an ad-removal IAP that costs $ 3.99 and point bundles that are available at the game’s shop. Collecting points in-game, however, is not a difficult process and more likely than not, you won’t have to purchase anything, and you can enjoy the game totally without cost. 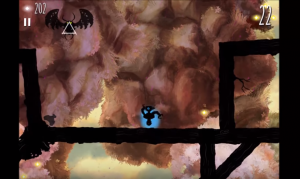 A large portion of Shadow Bug’s success is its gorgeous designs and beautiful art. The environments are colored and designed in such a way that give off a fairy tale, kind of atmospheric vibe. Be it monsters or the playable characters, they are all amazing to look at. Mesmerizing art with picturesque parallax backgrounds and mystical silhouettes. The BG music is also very fitting to the game and very adventurous. And the sound effects on point as well.

Fans of the original game and not, will appreciate this new installment and enjoy it immensely. For an endless arcader it offers a variety of features and enough content to keep the players interested and addicted. Whether you’ve played the original one or not, Shadow Bug Rush is worth giving a try. Let us know your thoughts and impressions in the comments below.