Home
Articles
Game Review: Save the baby crabs in the amazing Mr. Crab 2

Game Review: Save the baby crabs in the amazing Mr. Crab 2 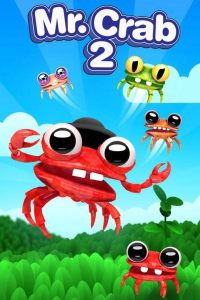 Since this year’s last month just arrived, I decided to review a game that although it came out a long time ago, it is one of the most beloved games out there. I’m talking about Mr. Crab 2 which as its name suggests is a sequel to the 1st installment which was also among the successful games of the app store when it was released. I have previously reviewed another game by Illusion Labs, Nono Islands (you can read the review here) which completely captivated me and is among my most treasured games. So let’s take a look at Mr. Crab 2 which is equally enjoyable.

Similarly to the first game, in Mr. Crab 2 as well, Mr. Crab and the rest of team must do their best to save the baby crabs that have been captivated and take them to safety through obstacles and enemy creatures. Will you help them fulfill their cause?

What is unique about this game is that it takes the auto-running gameplay and adds towering levels to it. The crab basically runs around the tower until it reaches the top. You will come across helpful devices that will lift you up and transport you to places you can’t go by yourself but of course you will also have to deal with enemies such as carnivorous plants and more that you need to avoid.

The controls are simple; you tap to jump and tap and hold to climb ladders or other places. What is very exciting about this game is how fast everything happens and how quick your moves need to be. You’re going in rounds and gaps appear out of nowhere and same goes for moving platforms or huge flowers that act as trampolines and take you higher. Because going back by yourself is not possible, the game introduced a clever way to make you change direction in case you need to return to a previous spot and this is walls that when you collide with force you to change direction. This is very helpful in order to find more captured babies because it is easy to miss them if you follow a different route. At first they’re always in front of you but as you advance and levels become more complicated, you have difficulty spotting all of them. Needless to say, there are more than 1 or 2 on each level and you can keep track of their number at the top left of your screen. 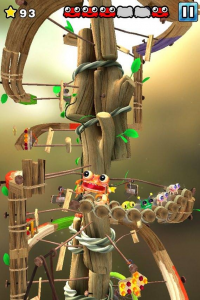 Depending on the number of the babies you collect, you can unlock more characters. Also, the games has other features such as the Vending machine which gives you rewards like accessories for you characters. You can use it either by spending stars that you collect in-game or by watching an ad which still requires 3 stars which is not as bad as it sounds because the stars are the game’s currency and are available in abundance on each level.

Every world consists of 4 levels and there are a total of 89 levels in the game. After a while you’ll have to unlock levels from the vending machine which surprised me because I haven’t come across something like that on another game. Whether it is a good feature or not, is something that depends on each player’s mentality.

I played this game for a good amount of time before realizing the sun has set but I enjoyed it immensely and I believe you’ll also agree with me once you try it. It is one of those games that you fall in love with right from the start and before realizing it you’re addicted.

Typically, you get to unlock all levels via IAP for $ 4.99. Other than that there are no additional IAPs and the game is completely free though of course you’ll have to collect plenty of stars and rescue babies to have access to the features.

Appearance-wise Mr. Crab 2 is very well designed and the levels draw your eyes with their colors and diverse settings. The movements are smooth and the controls intuitive. The lovely characters and the joyful BG music complete an already wonderful experience.

I recommend this game to everyone as it caters to all types of players and its carefree gameplay will give you lots of pleasant playtime. It is not frustrating at all, it is hard to lose and it is very rewarding as well. One of the best games available and it is sad that it is not available for android devices as well. Have you played it? Let us know your thoughts and impressions in the comments below.

Mr. Crab 2 screenshots (above) and trailer (below)