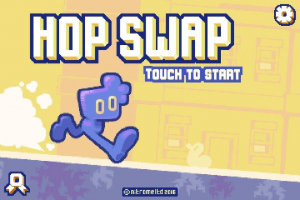 Games that mess with gravity tend to have quite an interesting concept and approach in terms of gameplay. Nitrome is one of my favorite developers always returns with games that put your mind and reflexes into test and Hop Sway is no exception. Prepare for an unorthodox platformer with a clever control system, lots of frustration and of course plenty of fun.

The hero of our story is a blue human-like creature who one night was transported to a different dimension by following a light that appeared at his room. Although the light resembled that of an alien spaceship that comes to kidnap people, this particular light transported the mc underground instead of upwards. Now he is trapped in a world where jumping through the grounds and swapping between earth and sky and vice versa is the normal thing to do.

The controls are the most tricky part of the game and for a good reason. The mc runs automatically and you can control his direction by swiping left or right. What took me time to get used to, was the fact that when he collided with a wall he took a turn by himself and this confused me as I wanted him to remain still in order to make the jump. To perform a jump you have to swipe up and to move to the mirrored ground underneath you, you swipe down (and then up again to return to the upper ground). You can’t swap between grounds any time you wish to; when this is possible you will notice empty blue space underneath you, otherwise you’ll be moving on solid ground with blocks and bricks. 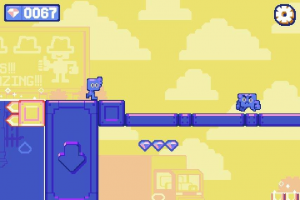 The main obstacles are the spikes that appear not only at the ground but on the sides as well. Later on you’ll encounter shuriken and other dangers. Needless to say, when you’re moving underground its gets much harder to avoid them and most of my losses are a result of this. Enemy creatures are also present and depending on which ground they are, they are blue or yellow. Some simply move back and forth and you can jump on them to destroy them but there are also those that fire bombs from their mouths and avoiding them is a task that requires nerves of steel.

Checkpoints are available in small distance between the previous one and to activate them you can either spend gems that you collect in-game or by watching an ad. After getting used to swapping between grounds (or worlds) and learn to control your movements in both cases, you will experience the true joy and addiction of this game and it will be hard to put your phone done.

There is only one IAP available on Hop Swap and this is for removing the ads. If you can’t stand ads then I suggest you purchase it because you will have to deal with them quite often while playing. Apart from that there is nothing else to purchase and the gems can only be collected in the levels themselves. 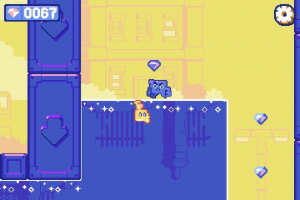 Hop Swap uses pixalated graphics which is common in most Nitrome games and retro lovers will enjoy its look and music immensely. The colors are very bright and change between blue and yellow as these colors are what make the difference between the two worlds.

Challenging yet very straightforward, Hop Swap will captivate you with its mechanics but it will also give you a headache until you master it. It has all the elements to keep you good company and train our reflexes in the process. Have you tried it? Let us know your thoughts and impressions in the comments below.

Hop Swap screenshots (above) and trailer (below)