Home
Articles
Game Review: Nono Islands Will Bring to the Surface the Indiana Jones Inside You!

Game Review: Nono Islands Will Bring to the Surface the Indiana Jones Inside You!

Summer is all about the sun, the sea, and vacations, and since we’re already in the middle of summer the best way to celebrate it is with a game that takes place in exotic islands and comes with treasure hunts and dangerous traps and creatures! Despite is sounding like a serious, adventurous Indiana Jones kind of game, Nono Islands is far from that. It is actually a light-hearted, action puzzler that stands out for not being an endless runner and for the unique approach it takes on the puzzle genre. It was released last week by Illusion Labs, and it immediately topped the charts and became editor’s choice for the week.

Let’s talk about this rare gem and if it’s worth the hype, shall we? 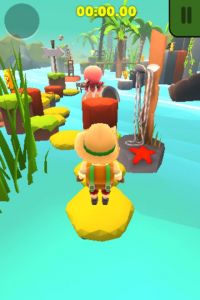 In Nono Islands you take part in a quest that is regarding the discovery of ancient lost treasures. But the Nono Islands are not just exotic paradises- they also hide great dangers too! These dangers have the form of the so-called Nonos who are warriors entrusted with the guarding of the treasures, and together with their army (consisting of various monsters such as skulls, giant spiders and sharks) they will try to stop you from reaching your goal. Other obstacles will also make your life hard but by successfully avoiding them you can get to the treasures you so much want!

The player’s task is to navigate their character (you can choose between a male and a female explorer) through a maze that is full of traps. The controls can be a bit tricky at first and I won’t deny that I got angry multiple times with my inability to navigate my character properly. To move forward all you have to do is tap, and one tap equals one step. But what happens if you want to move left/right or even move back a step or two? While the answer is simple, putting it in action will prove to be a bit confusing. To do any aforementioned movements you have to swipe on the direction you want to move but the way the tiles are positioned and the camera angles are a bit confusing and could easily lead to you to the wrong direction and most likely an instant death. But this issue will slowly disappear as you progress and you get used to the way the game works.

In every level, you will walk on tiles that are surrounded by waters. Make a  wrong move and you will sink at the bottom of the sea. But this is not the only danger you will have to deal with; the “safe” tiles have the green color (more tile colors are added as you move to other worlds), and there are also yellow tiles many of which have ancient key parts that you need to collect in order to open the treasure chest at the end of each level. But apart from them there are also red tiles which work as a warning for you to be careful before stepping on them. Spiders, giant octopuses, Nonos, flying arrows and more are waiting for your step to attack you. To escape them all you need is good timing, e.g. waiting for the spider to move from the red tile in front of you to the next one, and jump forth when she leaves but don’t wait too long because she’ll be back fast. The same works for all enemies and traps. 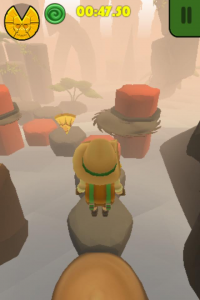 Moving platforms, spiked tiles, bouncing plates and more, complete the set of this exciting adventure. Gathering all key parts in each level unlocks a part of a tribe statue and by the end of the world you’re in, you will have completed the statue. Your other goal is to collect all the map parts that are scattered on each world and unlock the secret level which, is completed successfully rewards you with a Token, an item necessary for setting checkpoints. But what does that mean? Well, let me explain how the game works if/when you lose:  In Nono Islands losing doesn’t bring you back to the start of the level you lost, but rather to the level that you last laced a checkpoint to. So, if you lose on the 4th level and your last checkpoint is on the 2nd then you will have either to spend a token to place a checkpoint to the level you are in, or go back to the last checkpoint and play again from there. Placing checkpoints is something you need to do carefully because tokens are hard to come by unless you buy them through IAP. On the 1st level of each world a checkpoint is set by default so you don’t have to worry of jumping back to the previous world by losing.

The game offers two IAP options for the player. The first one is to purchase tokens which are necessary for setting checkpoints, and the other one is to pay once in order to unlock all of the checkpoints and be done with it. Personally, I find the IAP of Nono Islands fair but truth be told it is a bit forceful considering how frustrating it is to have to start from an earlier stage instead of the one you are in because of the lack of checkpoints. You can however, enjoy the game without purchases but use your existing tokens wisely if you don’t plan on purchasing more. 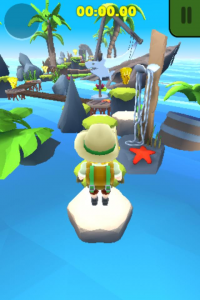 The graphics are lovely but frankly not the best, and the character designs are adorable. The monsters do look a bit scary though, especially the spiders (this however may be due to the fact that I’m quite scared of them and I’m biased). The colors are lively but lack the variety and depth that other games have, fortunately though not to the point of affecting the game’s enjoyment.

The sounds are great, and I especially love the cicadas' and birds' cries that definitely set the right atmosphere for a game that takes place in an exotic island.

Despite the annoying checkpoint system that is only fixable through IAP, Nono Islands manages to capture the attention and interest of the player right from the start. It is fresh like a summer breeze, has beautiful settings. plus its puzzle and arcade mix give a surprisingly fun result. My advice is to give it a try- get to play with it for a while. Then you can easily decide if you're going to stick with it or not.