Game Review: Mr. Catt arrives on iOS and gets revamped 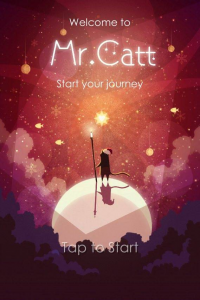 Back in October we reviewed a charming puzzler called Mr. Catt, by indie Taiwan studio 7QUARK, and now it has found its way to the iOS store plus being enriched with more elements and an overall upgrade. Let’s take a look at those changes.

Mr. Catt tells the story of a black cat who embarks in a journey to the milky way, drifting from planet to planet, to find his love, the white cat that one day disappeared without a word. In his quest, Mr. Catt will make many new precious memories until finally he reaches his true love. Will you help me fulfill his one and only wish?

Since the gameplay has been analyzed on the previous review I’ll only make a brief summary this time around. Basically, in Mr. Catt you are tasked with connecting 3 or more blocks (horizontally or vertically) of the same color to make them disappear. However, in this game, you only win if you match blocks with those on the board that have a star on them.

What is new in this version is that the tutorial’s design has been upgraded and from the total 300 stages, 1-150 have been rebuilt with new elements being brought in each chapter such as the Shuffle which is a Rune that refreshes the blocks you have available and you can use it when you're in a pinch and don't know what move to make, and more.I especially love the new feature called Dream Gallery where short stories are unlocked as you advance and you can visit it to watch them, starting with the prologue, and you can also skip them when they start playing in-game.

The graphics though are what is more prominent in terms of upgrade. Almost everything that appears on screen while playing looks even smoother or has even changed e.g. the power-ups icons, the target reminder and the effects while performing a move. In addition, since we are on Christmas season, the game offers a few new IAPs for the holidays that will appear very tempting to those of you who are already playing the game on Android.

With the new design and features, Mr. Catt is sure to captivate iOS users just as much as it did with the Android players. Give it a try and let us know your thoughts and impressions in the comments below.

Mr. Catt screenshots (above) and trailer (below)

#android #ios #games #review #mr catt #free
Comments (0)
< PREVIOUS ARTICLE
Game Review: Save the baby crabs in the amazing Mr. Crab 2
NEXT ARTICLE >
PDF: What It Is, And How PDF-To-Word Conversion Works