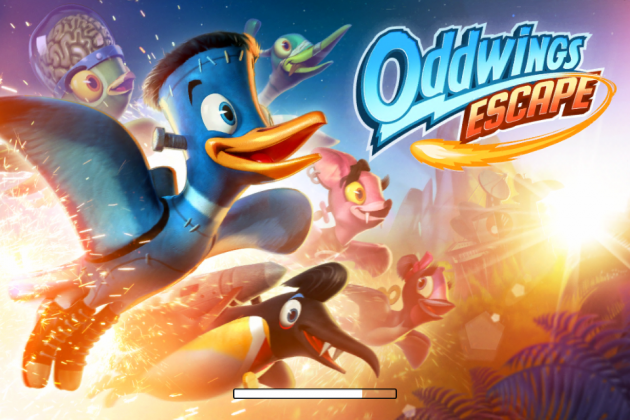 Oddwings Escape by Small Giant Games is not as odd as the title suggests, but it does manage to capture the interest of the player despite its simple gameplay and goals, mainly because the difficulty of achieving them makes up for the simplicity. I don’t know whether the main feeling I have when I play it is excitement or frustration. Probably a bit of both, although sometimes it’s pretty clear that the latter wins, and I’ll explain the reason why later in the review.

I enjoyed the uniqueness of the plot because it features an evil feathered scientist, Dr. Rooster, who used various birds as experimental tools in order to create… I have no idea what he wanted to create, but the result was the making of birds that had some… not so normal characteristics. Our main hero, a blue bird who looks like the feathered version of Dr. Frankenstein’s monster, and conveniently named Frankie, manages to escape the laboratory and now wants to save the rest of its captured friends by discovering the keys needed to get them out. As you can guess, “oddwings” refers to all those birdies that have been genetically altered to serve Dr. Rooster’s evil purposes. 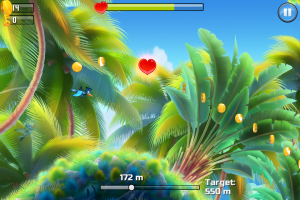 The game comes with a map that pinpoints each of the levels you have to clear, and a new one is unlocked every time you successfully clear the previous. The tropical environments of the levels are beautifully crafted and I enjoyed immensely staring at them, despite the difficulty I had keeping the Frankenstein bird on the air. It sounds a bit strange that it’s hard to keep flying considering the main hero is bird, right? Well, birds get tired too especially in the case of odd birds!

The truth is that at some point the bird will hit the ground, and your job is to make sure it flies as far as it can, collecting coins and hearts along the way. Hearts are very important because they refill the energy meter and you can fly further. Each level asks you to fly until you reach a particular number of meters. If you reach the goal you can stop flying and finish the round, as there is no finishing line.

After every round, it doesn’t matter if you failed or not, you can watch a video add and double the coins you collected previously. That’s a pretty neat feature and I actually like it when freemiums use ads cleverly by rewarding the player for having to watch them. Turning something annoying into something useful is a huge plus in my book. The coins can be used to upgrade Frankie’s (or any other bird’s you unlock) qualities such as speed, energy, and magnet to make each more powerful and lasting. Apart from coins and hearts, you must collect keys and missing them is not an option because they’re necessary for your cause. 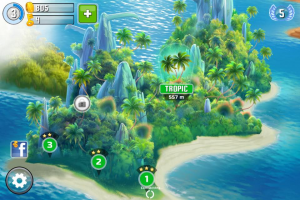 The levels are packed with paths, and rocky edges appear in front of you, forcing you to eithe dive in order to pass through tunnels or fly above them to avoid collision. There are also bombs scattered around, in mid-air actually, and I don’t have to mention how dangerous it is to stumble on them.

Now, the most important aspect is the control system which is tricky and quite difficult to manage. To control where Frankie will fly you have to tap, hold and swap your finger up or down. It sounds easy but once you start playing you’re realise it’s not a piece of cake. You see, Frankie has difficulty flying upwards; in fact, he literally struggles when he has to fly up although he’s doing fine when flying straight or down. The energy meter is reduced at a quite fast rate, and having Frankie flying slowly doesn’t help to reach the hearts needed to restore his strength. Not a few times, I was millimetres away from a heart and the bird collapsed. Imagine the rage!

What you need to do to control your character easier, is to keep your eyes on the white, almost transparent arrow that show you where you are leading the bird, instead of looking at the bird itself.

It’s also really fun if you are connected to the Game Center because while playing you can see the transparent characters of other players’ and thus see their progress. It gives the game a new dynamic and it’s certainly one of the highlights. 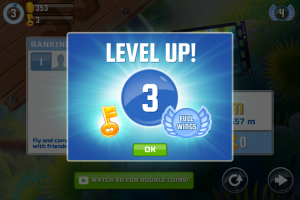 You are allowed 5 games before the energy timer runs out and then, you’ll have to wait 30 minutes for a new set of rounds or use IAP. Every time you level up the energy timer refills itself but you won’t be leveling up as quickly the more you progress.

The IAP on Oddwings Escape allows you to purchase coin packages which you can then use to upgrade your characters’ qualities. It’s tempting because at many points you’ll wish you had more speed or energy, although, truth be told, you won’t notice a big difference compared to the default qualities. You can also purchase keys which, as mentioned earlier, unlock other characters.

My favorite aspect of Oddwings Escape is none other than the stunning visuals. It’s not often that you come across such gorgeous graphics and exceptionally detailed designs in a (sort of) endless runner game. Map, characters, backgrounds, they have all unique styles, each serving their purpose successfully. Despite the difficulties that you'll encounter, you will love the little birds because of how cute they look.

The music is nice although not very distinguish. It fits the game but it doesn’t stand out all that much.

Oddwings Escape has its strengths and has its flaws as well. I suggest you try it out for yourselves and see if it’s your cup of tea. In my case, although I didn’t love it, I enjoyed playing it and finding tricks to get me a bit closer to the goal. In fact I still check it daily, but don’t spent a lot of time on it. It’s a good game for when to take a break but not one to play for hours.