Game Review: Languinis, A Three-Match Puzzler With A Twist! 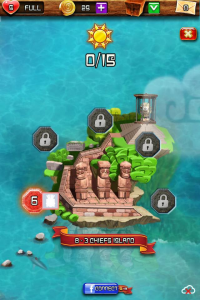 It looks like I come across many interesting three-match puzzlers lately, such as the previously reviewed popular game Wedding Escape. This time around another unusual puzzle game made its appearance and it kept whispering to me “play me, play me” and I couldn't resist the urge so here we are, reviewing a three-match puzzler by Tilting Point Spotlight which goes one step forward and introduces something more than matching tiles. Can you guess what that is, based on the game’s title? Word puzzles! The player must form words out of the letters appearing from matching tiles! I fell in love with this idea and I hope so will you after reading the review and playing the game.

The plot of Languinis is very interesting and well-thought. The story takes place in the Aztec era and we learn that the Phoenix god sent little creatures the Languinis to come to Earth and name all things. At first it was fun and Languinis enjoyed their task like it was a game. But soon they grew tired of it and got lazy. The god got angry at them for abandoning their task and punished them by locking them in different places. Now, you must help them be released by uncovering letters and making words to appease the god and set them free.

Same as in all match-three games, the player’s task is to match three or more same colored items in order to progress. The items have to be the same in order for this to work and the items include: green leaves, red triangles, squares and blue pearls. Matching three of them is the minimum amount needed to erase them. Combining more than three, in various configurations, brings forth unique items, which have each a different strength that mostly result in the eradication of a large amount of other items from the board, thus making it easier for you to achieve your goal. 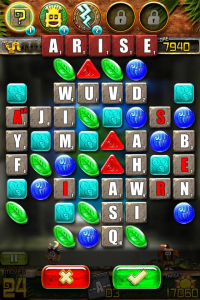 Now, as I said earlier the game includes word puzzles as well so let’s see how this mechanism works. Every time you combine three or more same colored items, in their place appear letters. Using these letters you have to come up with a word that must be 3 or more letters long. Each letter has points written at the bottom right of their tile and the more words you make the more points you get. You have a set number of moves and if you exceed them without completing the task set in each round then you must start over.

The tasks start simple but get harder as you level up. For instance, you will be asked to find x words and collect x number of points, or words that include a certain letter. It is very intriguing and I enjoyed immensely trying to figure out words!

Of course things don’t stop there, but you also get help from unique power-ups when you’re in a pinch. There is for example the Joker, which provides you with a letter that you’re missing to complete a word, the golden mask power up (it doesn’t have a name so I improvised) which finds the longest word possible on the board from the uncovered letters only so use it when you have plenty of them uncovered, or the lightning power up which can remove any tile (non-letter tile) that might stand in your way. There are more power-ups that you’ll unlock as you level up. The number of times you can use them on the same round is limited though so use them wisely.

If you match 5 elements in a “T” shape or in an “L” shape then you can create a bomb. To activate the bomb you have to make a match with it and when activated you’ll see almost the whole board explode and be replaced by a plethora of letters. Pretty neat, isn't it? If you match 5 elements in a line then you get a rare crystal tile, whose power is that it can be combined with any tile and uncover many letters. 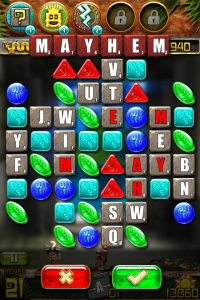 Every 5 levels, you release a Languini and move on to the next land on the map. For every Languini that you set free, a card featuring the little creature is unlocked. There are more than 60 levels available to keep you company for a long time.

Collecting coins is not easy as you can only get them through daily rewards or from completing successfully a round. You can also get some by connecting to your FB account. And here is where the infamous IAP makes an appearance. You can purchases various coin packages from the shop and with these you can buy power ups to help you in difficult situations. While the IAP is not very annoying in this game, yet it get frustrating when you’re one step from winning and you’re out of moves or power ups and you wish you had enough coins to buy either lives of boosts.

The graphics are stunning, with attention to detail and 3D visuals. I especially love the Languinis' designs because they look adorable, as well as the lively colors. The BG music is a surprise as it doesn't follow the norm, and instead of being funny, it is serious with amazing tunes. I would love to have the game’s OST on my music list.

Languinis is a good example of a game that risked trying things out of the box instead of following the same formula that most match-three games do. It’s not perfect, but it’s a great addition to the genre and certainly one that you won’t get bored easily with. If you enjoy word puzzles, then you won't be disappointed.