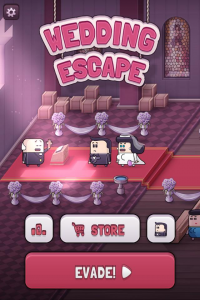 Match-three puzzle games show no intention of going down just yet, and players still ask for them no matter how many of these are out already. Of course, not all are equally good and despite the quantity, quality is strong with this genre. I myself enjoy these puzzlers but I’m quite picky when it comes to them.

Wedding Escape’s premise and unique features attracted me enough though and managed to keep me interested and enjoy it without leading me on the verge of frustration, like other similar games did. Let’s take a look at this game with the strange title, shall we?

You must be wondering what’s up with the title and how marriage is connected to a match-three puzzle. Well, our hero is a groom who, like most guys *ahem*, fears the thought of marital life. However, he realised it rather late… in fact, he started having worrying thoughts about his future as a husband during the ceremony actually, and because, as they say “better late than never”, he makes a run for it! But it can’t be that simple, right? So, after him are various people, like say the wife (obviously), the priest, a policeman, and many more related or random characters. How all these connect to the game? Read below to find out! 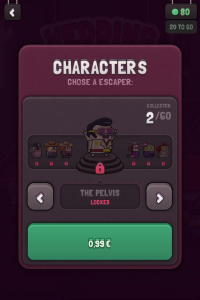 In this puzzle game you must match various gems and every time you clear a level the runaway groom finds himself in a different environment, from the church to the streets and even as far as an airport! You can see the action unfolding at the top of the screen with hilarious animation and facial expressions.

Now, matching the gems works like that: you have to tap on a tile to make it spin and match the other tiles around it to make them disappear. There are diamonds and coins of various colors, and if for example you have a purple diamond among blue ones, you spin it in order to make it blue and then the magic happens. Same goes for coins; there are silver and gold coins and you must follow the same steps to clear as much as possible. Keep in mind though, that you can’t spin a coin that is among diamonds and vice-versa.This is not a unique gameplay mechanism for this type of games, but it's executed in an elegant way. 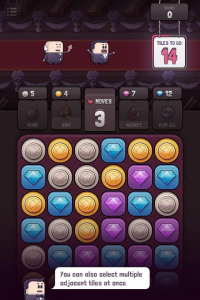 If you match a large number of tiles in one move, special pieces are created and boosts start to appear, different each time waiting to be used and bring you victory. Boosts come in a variety of forms, including blowing up entire rows of tiles, attracting tiles of same color with magnet, or turning a large number of the tiles into same colors. Considering that each boost is specific to a certain combo, you should play attention to the possibilities and act accordingly to earn the boost that you need to claim the victory. It’s quite easy to get a boost and you will find yourself wondering where all the boosts came from when you look at the top of the grid. At least that’s what happened to me! I would also like to add that power-ups are earned only by playing and not through IAP. This makes the game fair and enjoyable for everyone.

If you run out of moves before collecting the required amount of tiles (each round asks for more), then the poor groom gets caught and it’s game over. You are given the option though to watch a video ad and get more coins as a reward. Your other option is Divorce, which translates to "abort mission bro". In case you clear the level with more moves left then you are rewarded more coins.

Coins can be used for unlocking other characters, similar to Crossy Road. By spending 100 coins you get a surprise box which includes a random character. It’s really fun to change a character because they’re all hilarious. There is even a ghost character and seeing it running away and the bride chasing it is too funny. 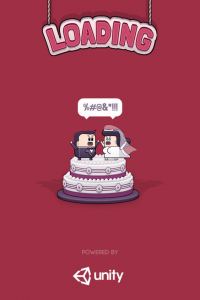 The visuals are crystal-clear with vibrant “lively” colors and the character designs are cute and hilarious. The sound effects are great and the BG music certainly fits the comedic plot.

Wedding Escape is a puzzler that tries and succeeds in standing out among many other match-three games, with its lighthearted approach, funny story line and fair, not monetized for the most part, gameplay. It’s a game suitable for relaxing and spending some time with when taking breaks from work. Give it a try and save the poor soul from getting married!