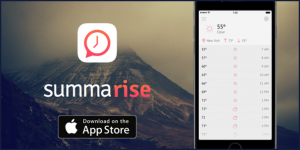 A few days ago, a very interesting indie app hit the iTunes store. Summarise – Talking Alarm Clock is a neat, futuristic alarm clock that goes beyond what its predecessors did. It reads your most important events and news for you, right after the alarm goes off.

The app consists of several panels you can enable or disable as you please – Twitter, weather, email, messages, news, reminders, birthdays and calendar. So, once your alarm wakes you, the app reads a short, yet informative summary of the information you want to hear the first thing in the morning. For some users, it's their incoming emails, for others it's their Twitter feed or their calendar events. Then the gentle digital voice wishes you a nice day, and you feel like the future is now.

The app is freemium, and weather, news, mail and reminders panels are free while the Twitter, birthdays and calendar panels are available for $0.99 each, or $2.99 bundled.

The app is customizable, and you can choose the voice, or download a new one, add, remove, customize the panels, personalize the sound effects for your alarm. The app sports a minimalist, yet smart Night Mode, which makes your device an elegant bedside clock. You can also address the app for an updated feed of your panels' contents at any time. The iOS users as well as the developer community praise the app for its novel, futuristic idea and smooth implementation. Besides, the app has a great potential expansion-wise.

This week, we had a chance to interview the app's developer Andrew Hart for some of the first-hand insight on the app development and the perks of being a one-man indie project – Project Dent. 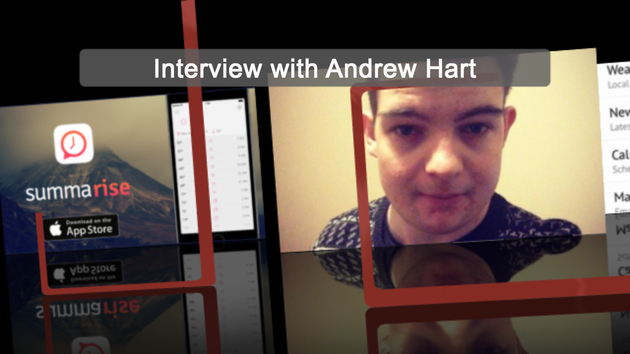 Tell our readers about Project Dent – who's the man behind it? Where did you learn to code and why did you choose iOS apps to be your field?

I started learning to code in my free time, while studying Film and TV Production at uni. iOS fascinated me from it’s launch, and the idea of creating apps that would run on an iPhone appealed to me far more than building for other platforms.

Why go indie instead of landing a safe cubicle in an office with a stable pay? How does one make such a decision?

So far I've worked both at a client company and at a startup, and both times I’ve desperately wanted to spend more time on my own personal projects. So, with some funds saved up, I decided to go for it and to make my own apps full time for a while.

Right now, I work at Google Campus. I live alone now, so it was either I get a co-working space, or I buy a lot of cats and become a total recluse.

Google Campus has helped me in various ways since starting - most importantly it keeps you in the mindset of a startup, and keeps you around people who are interested in technology, something I sorely miss when I’m not around people like that.

What is the most exciting part about being an indie developer?

The most exciting part is always when you get something working, and finally you can actually use something that you’ve spent a while designing and thinking about. And behind that is launching, and seeing other people commenting positively on your product.

Now tell us about Summarise – how did you get the idea? 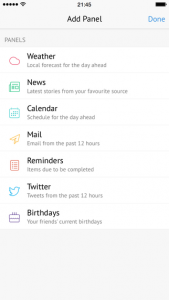 I originally built it just for myself - it was a talking wake-up alarm that grew to reading me the weather and my calendar. Over time, people would hear it and comment that they think it’s pretty cool, so eventually I decided to build it in a way that would work for everyone.

The way I see it, our lives have changed a lot over the past 6-8 years, where we now have very information-driven lives. Within the first hour of getting up each day, we all have things we like to check up on. There’s two interesting things about this. The first is that this is all contextually relevant to ‘now’. We don’t want the weather for the week ahead, we just want to know what the weather will be like today. We want to know what landed in our mailbox overnight, or what events are on our calendar for today. And the second interesting thing is that the things we check up on are different from person to person. Personally, I like knowing about the weather, news and Twitter. For other people, it’ll more likely be their email, calendar and reminders.

So in creating something that was going to bring this information to people, those two things were important - it had to be contextually relevant to now, and it had to be totally personal to the user. It had to be really easy to arrange things they way they wanted them, and to only have the things that interested them.

What were the most important challenges in making the app?

The biggest technical challenge was the integration with all of the different services that it uses, from a weather forecast, to a news API, to calendars and Twitter. Getting those all to deliver their content in the same format was a difficult process, and really taught me a lot about focusing, because otherwise you’d go overboard with each of these things and the thing as a whole would never get finished.

How do you cope with your advertising/promoting challenges? Most developers say that's the tricky part – any secret ingredient that helps you get the doors open and have people talk about your app, or is it purely the awesomeness of the app itself that gets you the positive attention?

The app market is incredibly crowded. The idealistic view is that you should be able to make something great, put it out there, and then people will come. In other words, the best products win. But if you look at the top charts on the App Store, it’s simply not the case. And the sad truth is that actually, without a good marketing push, it’s like you push out this brand new thing you made, and it immediately gets buried in this oversized pile of other apps.

Getting a good marketing push is easy if you already have a following, and a lot of media contacts. But if you don’t, it can be quite difficult. My advice would be to email as many iPhone news websites as you can, and always try and pick out a journalist who’s covered similar things before. Don’t mass email any of them. Just keep it short, keep it directed at them. Last week, one journalist mentioned that she liked a band called McFly in her profile, which happens to be an interest I have too. So I started the email talking about McFly.

I also think, if you’re going to email people, a mysterious, or otherwise non-marketing title is probably best. This time, I used ‘My new app, Summarise’, but if I was to do it again, I’d probably just title it ‘Summarise’. Don’t tip them off that this is a marketing email in the title, that’s a bad start.

You can find some really good advice and opinions on this sort of stuff on the podcast Inquisitive, in the Behind The App series.

Now, I am very anxious to see the list of additional/new features you are working on. The app is pure delight in a way that it allows for wonderful expansions and I see users asking for more features. In other words, people love it, and they want more of it. What are the features they want? And what are the features that are coming in the upcoming updates? 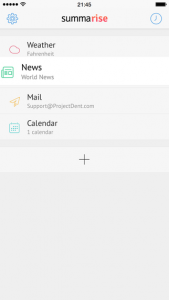 People have interesting ideas for additional panels that could be added, which is definitely an obvious point of expansion. It’s something that isn’t too difficult to do, too.

And people want support for other languages, too. This is difficult, because it’s based on natural-language, so it’s not like I’m just translating the names of buttons - it’s the whole app’s personality. If I can get a translation service I’m comfortable with, I’d definitely look into it. But it has to be done well.

The first update is coming soon, which has a ‘play’ button. It means that you can play through the alarm at any time, so if you want to set your phone’s alarm, and then open Summarise, you can do that. Or if you want to show your friends what it does, that’s going to be really easy too.

Since the app's “voice” gets to be the first thing your users hear in the morning, what choices do they have?

The user can choose any of the voice options available. There’s even instructions in the app about an area of Settings they can go into, to improve the quality of the voices, or to download new ones.

We know you coders never sleep, eat pizza while working, and your hobbies seldom go beyond the digital realm. Well, at least that's the common case. Does that apply to you, or do you have enough self-discipline to have a life outside your work? Any hobbies?

I live in London now, so I like to walk around and explore a lot. I tend to hang out listening to podcasts at landmarks like Buckingham Palace, or Tower of London, where I know a great secluded coffee shop. It has glass walls and ceiling, and you get a great view.

How many hours per day do you normally work? What are your productivity hacks?

I tend to work pretty solidly - I have little divide between work and home, it’s like one continuous flow. 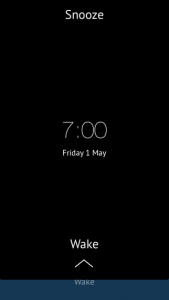 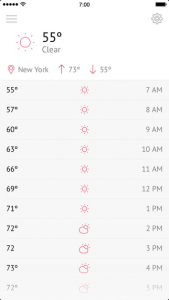 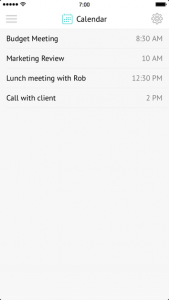 I know you're into the serious niche, but I can't help but ask you the same question I ask everyone – what are your favorite games (PC, console, mobile – whatever applies)?

I’ve been playing Cities: Skylines recently. They’ve done an amazing job at creating a city-builder that everyone who tries it seems to love.

Are you currently working on anything new, or focus on Summarise for the moment? When you are more or less finished with fine-tuning the app, what would be your next endeavor? (If you care to share your plans. If not, it's also fine.)

I’m looking into what’s next. Right now, I think it’s probably going to be a new messaging app (because I don’t think there’s enough of those!).

The team of Download3k appreciates the time and personalized, helpful insights Andrew Hart shared with our readers. We see a big future for Summarise, and sure hope to see more apps coming from this hard-working and talented developer who seems to have a firm grasp of his own future.

You can download Summarise - Talking Alarm Clock for iOS ⇐