Home
Articles
Game Review: Find the Best Way Out of Boredom in "Dig a Way"

Game Review: Find the Best Way Out of Boredom in "Dig a Way" 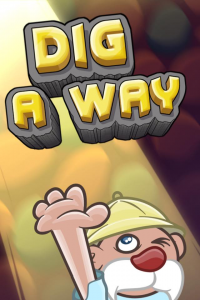 It always fascinates me how I start a game sometimes with have high hopes, only to end up being disappointed, but when the opposite happens, that's when I really dig it. Dig a Way by Digi Ten for iOS belongs to the 2nd category and for many good reasons. Lately it is getting harder and harder to come across a freemium game that treats the player with respect and doesn’t use the freemium card in order to attract players and bombard them with not so optional IAPs and ads. In Dig a Way not only did I have the fun of my life with its gameplay, but I also knew from the start which of the contents are totally free, and what not. But enough general talking, let’s get to the analysis, shall we?

In Dig a Way we follow the underground adventures of a miner and his dog, as they try to find as many treasures and gold as possible by digging and digging, while coming across various obstacles and dangerous animals.

You must collect as much gold and treasures hidden under piles of dirt as you can, and make your way out safely. The controls are fairly simple since all you have to do is move left, right and down. In the same way, if a block of dirt is in any of these directions you have to tap on the right, left or down buttons to dig it and pass through. No, I didn’t forget to add “up”, it just doesn’t exist in this game. Not very common, is it? But it shouldn’t come as a surprise considering you’re supposed to move deeper instead of moving up. No “up” button means no jumping either so if you find yourself falling off a block there’s no going up again. In case that means you won’t collect a treasure chest or gold, you can always restart the game, although I wouldn’t suggest that if you play a level for the first time. Clearing it comes first, and then you can always go back for a perfect score. 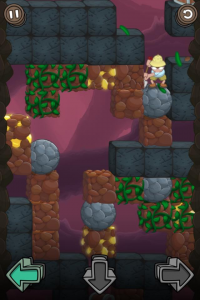 To make up for the missing jump function the game allows you to move at a higher speed by double tapping on the direction you want to go. This allows the miner to dash over a gap between two blocks and reach the other one. You will find this very useful when obstacles such as falling rocks start making an appearance.

To destroy normal dirt blocks takes only one tap (digging) but there are also blocks wrapped in vines and for these it takes two taps. Apart from these, you’ll encounter dirt blocks that have gold pieces mixed in, as well as treasure chests hidden between them. If you manage to collect all of them (gold and chests) then you get all 3 stars, but that’s almost impossible to achieve on 1st try. In many cases you’ll have to choose between one or the other to collect and leave one behind.

Some treasure chests are more special than others because they contain artifacts, such as dino parts. By collecting them, a museum display is filled with these discoveries and you can see them by tapping on the backpack icon at the main menu and get coins from them.

Now, by tapping and holding on your screen you can move the camera up and down to check what lies below and organise your moves instead of moving blindly. This becomes even more useful when you start encountering obstacles such as rocks or mad rabbits that will gladly attack you if you get in their way. While rocks are dangerous if you get under them, they are also useful weapons if you stand next to them. That’s because you can move them by tapping and crash the rabbits or fill gaps and stand on them to move forward. 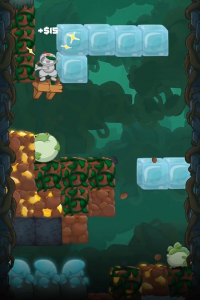 There is no timer or lives in Dig a Way. If you lose, you’ll have to start from the same level and that’s it. It wouldn’t be fun to start from the point you lost because the levels are fairly small and that would ruin the experience. Although I said that there is no timer, there are levels in which an earthquake takes place and the ground above begins to crumble, in which case you’ll have to reach the bottom and the cave's exit before the whole thing collapses on you. Needless to say, this is very intense.

Depending on which chapter/map you are, different obstacles appear (bats, lava blocks and more) and this makes the experience more exciting and challenging.

In this game there are no IAPs for buying gold or finding an easy way out of each level. Success is based solely on each individual’s skills, reflexes and overall effort. Instead, you can play for free the 1st chapter called “Hidden Cave” which consists of 18 levels, and pay $0,99 for each of the other three chapters or buy all 3 for $1,99. Other than that, you can buy costumes with real money instead of gold that you collect while playing.

Lovely visuals and funny character designs complete the great experience that this game offers. The colors are bright and crystal-clear and the cartoonish designs are sure to make you laugh.

The music and sounds are equally enjoyable and fun, and fit the atmosphere perfectly. I especially enjoy the sound of digging and the sound the miner makes when he dashes over a gap.

I suggest you try out Dig a Way and challenge your brain and reflexes in one of the most fun adventure puzzles out there. Even though it's hard a lot of the time due to the increasing difficulty as you progress, it is undoubtedly a fresh take on the puzzle-platformer with a unique gameplay and amazing challenges. It's kind of addicting once you start playing it, and consequently you'll find it difficult to quit it, and before you know it, you’ll be telling yourselves “just one more game” without being able to stay true to it. All in all, I really dig this game! Sorry, I just had to do that pun!