Game Review: Jumping Kitty will make you question your reflexes! 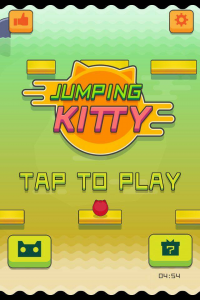 I’m a simple person, I see a game with cats, I play it. Seriously, I can’t turn my eyes away from a game that uses a cat as a main character, but of course the game also needs to be good otherwise no kitty cuteness in the world can save it for me. In the case of Jumping Kitty, an endless arcade by ZPLAY, the combination of cuteness and fun is balanced, although I lean more on the cuteness side because the game itself has a great premise but it is also very hard.

A cute kitty in the form of a ball with big eyes is stuck in the ocean, and as we all know cats hate water. In the case of our little feline things are even more serious as there are sharks waiting for it to drop in the water, as well as spikes in both left and right. Stuck in moving tiles, Jumping Kitty needs to keep jumping from one tile to the other to avoid the dangers that are basically all around it. Do you have what it takes to keep her afloat for the longest period of time?

I won’t lie to you, this game is hard. Fun, but hard. It will frustrate you a lot and you’re bound to lose faster than you expected every time. It’s an endless arcader so it is to be expected that you’ll meet your end sooner or later but in Jumping Kitty, sooner is more likely. The controls are simple just like your objective, you tap anywhere on your screen to make the kitty jump on a tile nonstop. If you jump when the tile is not exactly above or below you then your jump will lead you in the gaps between the tiles and straight to game over. It sounds simple but achieving it for a long time is really difficult. This is mainly due to how fast the tiles move and the spikes on each side that force you to act very fast and don’t give you enough time to think before you jump again. After a few tries you’ll be able to get a high score but things will get even harder after some point. Pink tiles will appear between you and the tiles you need to jump on and while they’re harmless in that form, they can turn into blocks in order to block your way and if you jump while a block is in your way then you’ll collide with it and lose. 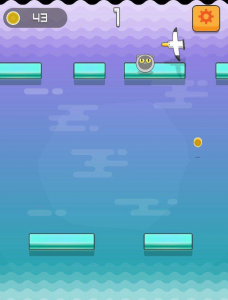 A coin will also appear in your screen but don’t make the mistake I did to give collecting it a priority. It will only mean you’ll lose faster. Your priority is to jump on a tile and if you get the coin in the process then even better. Collecting coins is easier through gifts that are available every 5’ and by watching game ads. It’s much safer and it rewards you with plenty of coins instead of one like it happens in-game.

With coins you can unlock a new kitty (100 coins for each) from a huge variety! I love each and every one I unlocked up to now (I’m in love with the Persian cat) and I’m sure you’ll also find them adorable and funny. Their role is cosmetic and they don’t each have a unique power. By completing missions you are also rewarded with a kitty so try to keep up with them. Despite the difficulty it is very enjoyable to play and I found myself playing again and again aiming for a higher score. The frustration from losing actually made me more stubborn to do better. It is a game that puts your agility and reflexes to test and makes you question your limits.

The game comes with a lot of ads. You can watch ads to be rewarded coins, which is fair and it is a feature I like in most games that use it. But in Jumping Kitty ads appear at the bottom of the screen and in many cases in between games which is a bit too much. You can, however, remove the ads for a mare $0.99. There are no other IAPs which of course is always a good thing. You collect coins, you unlock characters simple and clean. 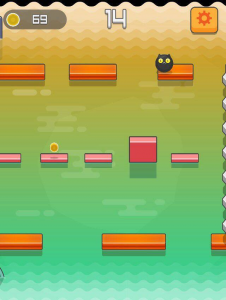 The best part is the kitty designs, hands down. I love how similar yet different each one looks. The game’s graphics are 2D with crystal-clear, vibrant colors and the background’s color schemes change with every try. The music consists of fun and cutesy tunes befitting of a kitty game, although it doesn’t help calm yourself when you lose.

Jumping Kitty is a game for those who like to be challenged and enjoy endless arcaders with high difficulty. It is not the best of its kind but it is perfect for challenging and improving your reflexes. Also, the cute kitties give you many reasons to try harder to save them and to unlock them all. If it was a little bit easier, I believe it would be even more enjoyable. Nonetheless, it is a game worth playing and the satisfaction you get for surpassing your previous high score is great. Let us know your thoughts in the comments below!

Jumping Kitty will also be included on the Google Play store for all Android users at a later date.