Game Review: Join King Rabbit on his quest to rescue his citizens! 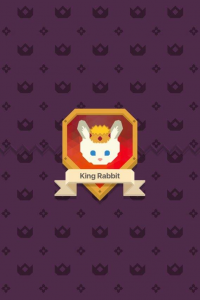 Game sequels are always risky as the players have high expectations of them, which is to be expected. More features, improved gameplay, better graphics are the most basics of the things people want to see in a sequel. In the case of the puzzler King Rabbit, everything is better and that says a lot, considering that the original game, Furdemption that came out last year, was already amazing to begin with. King Rabbit is not only enriched in terms of gameplay but it is also free (with IAPs) and even newcomers can enjoy it without having to play the original game first.

In King Rabbit you play as the King of rabbits who must rescue his subjects from enemies and free them from their cages. While in Furdemption the lovable royal rabbit had to save himself from various dangerous situations, this time he risks his life for his citizens. The journey takes you in many places full of traps and helpful items that you’ll have to use cleverly in order to achieve you goal.  Are you ready to solve the puzzles and provide a helping hand to the king and save the rest of the rabbits?

Let’s begin with the way the game is organized. There are many levels (96 for now and more on the way) and many chapters to finish.  Each chapter comes with 16 levels and there are 7 chapters on the Campaign set of Chapters and 4 on the Fire Adventures set. The Campaign set is free but for unlocking the Fire Adventures chapters you’ll have to pay. We’ll discuss the IAPs further later on. Now, to unlock every (free) chapter you’ll have to either complete successful the levels of the chapter you’re currently in, or unlock it by spending coins (Carats) or diamonds which are the game’s currency. To get a perfect score you need to collect all three Carats hidden on the level. That way you’ll receive rewards every so often and increase the amount of diamonds which are rare. 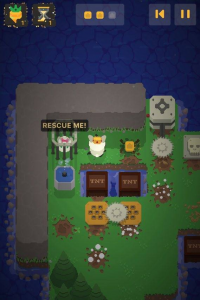 Of course, your main goal is none other than saving you cute rabbit citizens (who all happen to be females with cute ribbons) that are locked in cages. To get to them you’ll have to go through many obstacles and enemies. At the beginning the levels are easy to help you get used to the settings and controls and then gradually the difficulty bar is raised to make the game more challenging and tricky. The controls are simple; you swipe to the direction you want to move and that’s about it. One swipe equals one step and you can’t jump or fire a weapon. There are however some power ups to give you a helping hand, such as the Fire Crown which allows the King Rabbit to burn obstacles, mainly trees to open pathways and help you escape, or the Hourglass which slows everything down except your own movements so that you can pass throw the deadly traps unscratched.

Also, by swiping with two fingers you can take a look on the level and plan your moves accordingly. This is very helpful especially later on when there are obstacles all around you. Speaking of obstacles, these come in many forms. For starters, there is sea all around you and you’d do well to avoid falling into it. But small lakes appear inside the levels as well and in many cases you’ll have to cross them to advance or you’ll notice a coin in them. For that reason you’ll have to make clever use of the most helpful items in the game which are the wooden blocks. Pushing one in a lake allows you to step on it without touching the water. Sometimes when destroyed (by a bomb or fire) they also reveal a Carat so if you can’t spot the third coin chances are it is hidden in a block. You will also need to overcome fireplaces, bombs that you’ll need to set on at the right moment to explode close to walls and other obstacles to destroy them, saws and more.

In King Rabbit every move is calculated. There is only one way to grab all Carats and save the citizen and if you find it hard, you can always use a hint which guides you throughout the whole level by showing you the way with each step. It is very helpful and makes even the hardest of levels look like a stroll in the park. Of course you don’t have an unlimited amount of hints at your disposal so use them wisely otherwise you’ll have to wait a lot for new free ones to be available. The puzzles will make you scratch your head at times to find how you can go through the level without loses and I’m at awe at how well-thought challenging they are. It got me addicted only a few levels in. But not everything is perfect and the downside is basically the excessive use of IAPs. 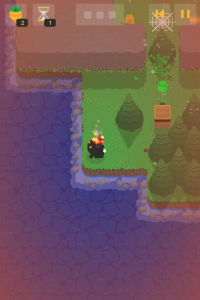 The game is heavy on the IAPs as you are offered to purchase diamonds packs, to buy hints to help you solve the puzzles, or buy the hourglasses that we mentioned earlier. There are also ads in the game and while they don’t pop up very often it can still be frustrating. With any purchase you make though, the ads are automatically removed permanently. Buying Diamonds is very tempting because you only get the periodically in the game and not only you can unlock chapters with them but you can also customize the King Rabbit and more specifically his death and run animations and of course his appearance. All look so gorgeous and cute that you want to have them all. Also the are levels that you can only play by paying but the free ones are plenty and always increased so you don't need to worry if you can't buy new ones.

The 3D graphics look stunning and the designs are top-notch and a treat for the eye. As expected, the King Rabbit steals the spotlight with his cuteness but the settings and traps are also great to look at. Even the death animation looks nice as the rabbit disappears in fluffy bubbles. The colors are vibrant and crystal-clear. The BG music is joyful and motivational.

King Rabbit is a worthy successor of Furdemption and it will amaze both newcomers and original game’s players alike. The puzzles are clever and there’s nothing too difficult or frustrating for the player. It is so addicting that you’ll find yourself jumping from one chapter to the other without noticing how much time has passed since you started. If there were fewer IAPs there’d be nothing negative to say about it but even with the way the game is, it is still a masterpiece that can be enjoyed without sending a cent. I suggest you give it a try and experience the magic that is King Rabbit. Let us know your thoughts in the comments below.

King Rabbit screenshots (above) and trailer (below)