Home
Articles
Game Review: Help a cute ghost get over his fears in George: Scared of the Dark!

Game Review: Help a cute ghost get over his fears in George: Scared of the Dark! 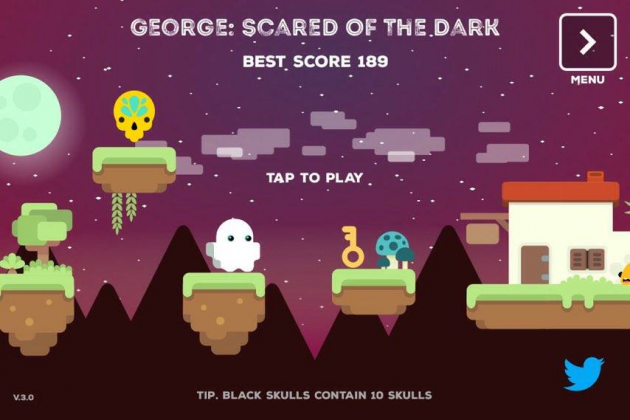 Are you guys scared of the dark? Do you need a light on to sleep when you’re alone at home? Can you sleep soundly after watching a horror movie? I’m sure, most, if not all of you, had to deal with that fear at some point in your life and for good reason. Dark is scary because we can’t see what’s hiding inside it, and the hero of the game we’ll review today is also worried that he will never find the courage to face the dark and his fears. 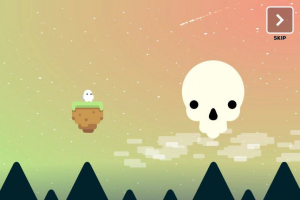 George is a cute ghost-like figure that begins a journey through dangerous paths in order to fight against his fear of the dark and find the answers he needs. On his quest he will be accompanied by a spirit that will give him advice and enlighten him with precious information. All the answers will become clear when George reaches the lighthouse at the end of his journey. Will you help him get there safely and find out the truth together with him?

The game consists of unique10 levels, each with their own difficulty bar but all challenging and interesting. At first you go through a tutorial level that teaches you the basics and it might seem easy at first but as soon as you move on to the normal levels you’ll be faced with a harsh reality. The game is hard to play and won’t go easy on you no matter what. But let’s start from the basics:

The control system is fairly simple;you tap to make a jump, you swipe left to backflip and right to leap, and you swipe down to show hud (heads up display). It took me some time to get used to the controls because George moves by himself and you’ll need to act fast due to how many enemies and obstacles there are in front of you. 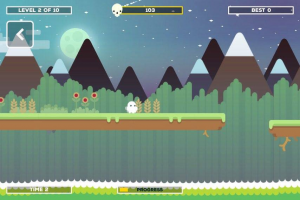 You will also come across skulls or various colors (white, black and yellow). Don’t be afraid of them, they’re collectibles and depending on their color you are rewarded with a different number of skulls, e.g. black skulls reward you with 15 skulls. These are important for unlocking characters (3 in total) or to unlock permanent power ups such as the Jumper that boosts your Jump and Leap abilities. However, the number of skulls you’ll need to have to be able to unlock any of them, is a bit astronomical, at least if you plan on collecting them only in-game. I think it would be better if the power-ups could be activated in-game and not with this really hard to unlock way. Also, the skulls you collect in each level are only added to the total count when you successfully complete a level. So, no matter how many you collect, they will turn to zero if you lose. This makes increasing their numbers even more difficult. In my opinion the skulls should be counted despite losing or not to help the player and to make them feel that they gained something even if they ultimately lost.

The levels are not too long but the challenges are there to make everything more exciting. Patience is the key word here as it will take plenty of it in order for you to be victorious. The levels will look different every time you play so there is no point on memorizing your surroundings. The hardest part is not jumping between platforms and blocks, but avoiding the enemy creatures that lurk around. These creatures will move unexpectedly and you’ll have to be prepared to jump at the right moment if you don’t want to land on them and lose your life. Timing is basically everything in this game and there’s nothing more satisfying than reaching the finishing line. You can actually feel that you tried really hard to get there and this makes every loss worth it.

George: Scared of the Dark retails for $1.99 and is available for download only for iPhones but it can also be installed on iPad via compatibility mode. 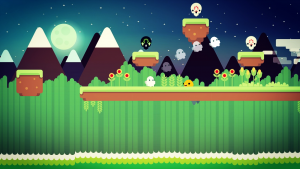 The game has a shop where you can purchases all kinds of skull bundles such as the Skeleton pack that includes 500 skulls for $ 1.99 or the Alien pack that is filled with 5000 skulls and costs $ 6.99. In addition, there are two expansions, one to be released during Halloween and the other during Christmas holidays.

The 2D graphics looks amazing and the colors are vibrant and crystal-clear. George is very likable in terms of appearance and even the enemy creatures look cute, although they are the main reason of the multiple loses. The backgrounds and settings are very well-made and detailed and the colors are moody as one would expect of a game with such a theme. They all fit very well with the whole mysterious atmosphere and the same can be said about the BG music.

If you lose your temper easily then George Afraid of the Dark is not for you. This game requires patience and lots of attention. It is challenging, fun, with a captivating plot but you’ll need to be focused and improve your gameplay after each game over. It will be hard to let go once you start playing and the more clues you find about the story, the more you will wish to reach the final answers. Let us know your thoughts and impressions in the comments below.

Download George Scared of the Dark for iOS devices here.

George: Scared of the Dark screenshots (above) and trailer (below)

#ios #games #review #best games #paid #george scared of the dark
Comments (0)
< PREVIOUS ARTICLE
How to add your signature on a PDF document using only your Android phone
NEXT ARTICLE >
Where to download official Windows 7, 8.1, 10 ISOs from? Legally, directly from Microsoft.