After bringing as games such as Heavenly Sword, Enslaved, and Devil May Cry, in 2013 Ninja Theory began developing her new game, this time entirely under her control, without any publishing company. Hellblade is the studio's big bet, an independent production with AAA specifications. A game that has proven to be Ninja Theory’s ace.

Hellblade's story dates back to the 9th century AD at the Scandinavian North. Senua, the protagonist of Hellblade, is shown rowing on the remote and misty waters of the Scandinavian Sea. Senua originates from the Pictus, a Celtic barbarian tribe, historically known for its strong resistance to the British occupation of Britain. Senua suffers from a mental disorder, making it difficult to adapt socially to her daily routine. Whispers, voices, hallucinations, visuals, accompany her throughout her life.

When the mentally ill Senua, comes of age, finds the love of her life, Dillion, the son of a wartime Picker, with whom she wishes to live the rest of her life. At that time, many of her compatriots' villages were plundered by Viking raids. The survivors, in their attempt to justify the misery of their race, find in the face of Senua the scapegoat, accusing her fragile mental state of the suffering of their people. In other words, they consider her mental illness, a curse. Thus they decide to send Senua in exile in order to render good fortune and prosperity again. When the years of exile expire, Senua returns to her place to meet her loved ones again. Sadly for herself, the Vikings have killed the remaining members of the race and her parents, while Dillion finds tragic death by the blood eagle, a barbaric pagan Viking execution . Senua decides to descend into Helhaim or Hel, the kingdom of darkness and the dead, one of the nine realms of Scandinavian mythology, to be able to bring Dillion back to life. 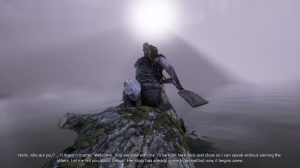 Hellblade is an action adventure with clear hack n 'slash influences and puzzle-solving features. The two aforementioned mechanisms work well, contributing significantly to the overall experience, forming the backbone of the title. At Hellblade, you focus on Senua and her story to get to know the demons living inside her in the journey of purification she is called to accomplish in order to embrace the redemption she so much seeks.

The gameplay is simple in its structure: you control Senua from a third person perspective. You roam in forests, looted villages, ruins, caves, temples, labyrinths and more. TYou can also explore but do don’t worry about getting lost with the complexity of the areas. Actually, you move along a predetermined path, without deviating significantly from the destination of the objective. So, along the way, you kill enemies, you collect lorestones (the only kind of collectible in the game, through which Druth, a Pocket Warrior, narrates a series of Scandinavian myths in Senua, such as the birth of the nine kingdoms) and solve puzzles.

The various puzzles rely on the observation and hallucinations that give birth to Senua's sick mind. For example, you usually get to the point where a large door clogs your way, with Scandinavian runes on it. Your ultimate goal is to locate them by looking at specific places for light indications that correspond to each rune. Typical case is the interaction with the gates of Valravn, god of illusions, through which you reveal hidden elements of the environment (e.g. bridges) that change the architecture of the space to your advantage. 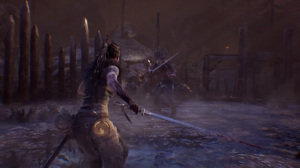 The battle system consists of traditional and familiar hack 'n' slash mechanisms. You encounter only five or six different kinds of enemies, from pagan warriors with swords and poles to giant enemies who keep axes and hammers.Struggling with the sword, you attack with light, heavy and aerial attacks that combine to produce some combo attacks. When situations require you to be in a position of defense, your options are block and escape, which you avoid and repel your opponents' hits. An additional defensive mechanism that acts aggressively in parallel is the parry that is achieved when you defend yourself at the last minute, before you get hit by the enemy weapon, thus helping you to move directly to the counterattack.

Hellblade is available for PS4 and PC for $30. 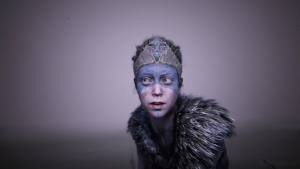 Hellblade has crystal-clear graphics with rich details, a palette of intense colors dominated by the dull gray and nightmarish black color and spectacular designs. Hellblade's technical / visual sector raises the question of what would have happened if the game was not just an independent production. Ninja Theory manages to deliver such an amazing result with its limited budget, even better than in many games of the so-called big studios out there.

Moving on to the sound design, the game is full of amazing ambient sounds and monotone melodies that attempt to express paranoia and despair, through a stunning background music. Based on folk music heritage and tradition, you hear winds, flutes, barbarian chants, percussion drums, lyres, music using natural objects such as stone, water, leaf rusting and wood, which give you a pompous musical sound feast.

Hellblade, this descent into the dark abyss of human paranoia, is the ultimate masterpiece of Ninja Theory. I played and enjoyed every moment, every minute of the almost 10 hours I needed to finish the game. And I will certainly play it again in the future. Gamers who love story telling and favor the plot over the action, you have to experience the gem that is Hellblade. Let us know your thoughts and impressions in the comments below.

Hellblade screenshots (above) and trailer (below)