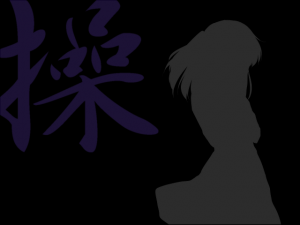 You know how sometimes you come across a song, or a show, or a game out of pure coincidence and you find yourself completely stunned? This is exactly the case with the game we’ll be reviewing today and with a few others in the same style, that will follow. Misao is a free indie Japanese RPG that came out back in 2011 with a few updates later on, and has been translated in English in 2013, with its final version been released at 2014. It is a 2D horror game that will make you feel like you’re playing on your GameBoy and I honestly wish it was available for smartphone as well apart from PCs but this is probably the only thing I have to complain about because this game is really, really good.

The game tells the story of an unfortunate girl, Misao who has disappeared 3 months before the time the game takes place at. The player takes upon the role of one of her classmate’s and you can choose to be either a boy or a girl. The whole adventure takes place in the school grounds where after an earthquake the whole school gets sucked inside a different world, the spirit world. Now, it is up to you to discover what caused it and uncover the secrets behind Misao’s disappearance and break the curse. 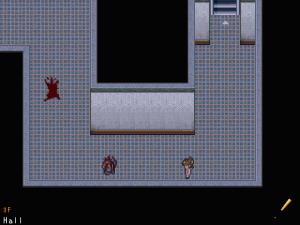 Misao is basically a game in which you explore, interact, solve puzzles and collect items. I will try to make the review as spoiler-free as possible because due to its plot, it is far more enjoyable to find out every little secret by yourselves, step by step. The controls are simple; you press Space or Enter to interact or to collect items, and Esc to open your inventory. Needless to say, you walk with the arrow keys. The game doesn’t require any installation and all you have to do is open its folder and open the Game icon. It is also very small in size and covers at most half of your screen. To save your progress you need to visit the school’s Students’ Council room where the President, a mysterious guy named Onigawara will explain a few things to you first and then you can return whenever you need to save. There is also a Quick Save option by pressing C or Shift but always remember to visit Onigawara before closing the game because QS only works while you are still playing. In addition, there are places where QS doesn’t work so try to QS before entering any weird place.

There is also the library where a strange yet likable glasses-girl, the vice-president actually, is there to help you with any questions you might have by giving you hints. Also, please read the books available there because they also give hints that could be helpful to you. Through your inventory you can even choose to be transported to the library but similar to QS, that doesn’t work everywhere.

Speaking of rooms and strange places, mostly everything looks normal before you enter. You are inside a typical Japanese school with classrooms, lockers, blackboards etc. But the secrets hidden inside them can be either helpful to you or could bring you horrible death. I think I have died in all possible ways while playing and sometimes I even stepped on the same trap twice, because I forgot I have been there before. It really is like a maze at first because of the many corridors and levels. 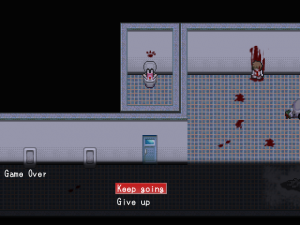 While the characters are in their chibi (tiny) form, yet the gory imagery and violence will make you feel really sympathetic towards many characters. It has humor and some death traps are really funny, but please remember that the genre is horror and tragedy and it gets very dark in the process. The rest of the characters are very important to the story although this won’t be apparent at first.

In terms of length, Misao is a game that doesn’t take too long to clear. It has however more than one endings so even if you clear it, wait for what will follow because it gets more interesting from there.

Misao is a 2D game built in Wolf RPG Editor engine, with pixalated graphics and retro sound effects. It is actually a combination of pixalated characters and hand-drawn designs, because during interactions, you can see the characters talking at the bottom in their anime forms. The fact that a pixalated game can work so well with the horror genre, I admit it is something I didn’t expect. The BG music is either spooky or sad and fits the atmosphere perfectly.

All in all, Misao is very entertaining and thrilling game that while have you asking for more content. Such hidden gems, cult one could say, with their simplicity and imagination thrown into them, are so easy to captivate you more than famous titles with big budgets. Give it a try and you’ll understand what I mean. Let us know your thoughts and impressions in the comments below.

#games #review #pc #free #misao
Comments (0)
< PREVIOUS ARTICLE
Game Review: Jelly Cube - Soft Bomb
NEXT ARTICLE >
What Is NFC, and How To Use It [Android]