Home
Articles
Game Review: Blades of Brim - A New, Epic Adventure for iOS from the Developers of Subway Surfers

Game Review: Blades of Brim - A New, Epic Adventure for iOS from the Developers of Subway Surfers 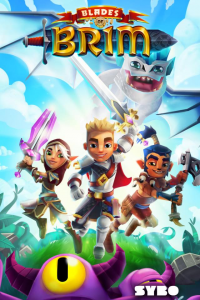 From the creators of the highly successful, and one of the most famous endless runner games, Subway Surfers, comes a new instalment that will captivate the fans of SF and offer much more than its older cousin. Blades of Brim adds more ingredients to the recipe and the result will make you ask for more. I know endless runners have been overused but this doesn’t mean that creativity is lost, or that these types of games have nothing more to offer. On the contrary, I see great enthusiasm from developers trying to revamp the endless runner franchise, and a great example is Lara Croft: Relic Run that we recently reviewed. In the end it all comes down to imagination and wanting to offer a game that the players will want to play over and over and that applies to all types of games.

So let’s take a look at this new game and what it brings new to the arena, shall we?

In Blades of Brim you play as a young knight who goes on a quest to save his kingdom Brim, which is under siege by invading underling goons. In your adventure you also have the help of other characters and magical pets!

What mainly separates Blades of Brim from other endless runner is that it adds actual combat to the formula. While it’s still a runner at its core, this surprise creates a whole new experience for the player and without noticing you’ll forget you’re even playing an endless runner. 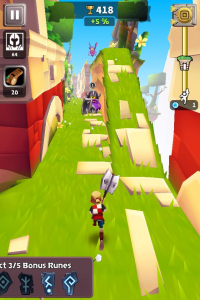 Typically, a game is over when you die and the next time you play, the levels will look different because they are randomly generated. Controls are intuitive and fairly easy to get used to as you have to swipe left or right to change direction and swipe up to jump or down to slide. Now, don’t think that moving so as to avoid obstacles and enemies are what this game is about. Your character is equipped with a large axe that takes out the purple enemy creatures, and to do that you simply swipe to where the creature is and then your character takes care of the rest. But once again, there’s more to it than what I already described; the creatures can actually attack you if you’re too slow to attack them first, and a hit from one of them results in the loss of half a heart out of the 3 that your life span consists of.

To attack on time you have to make your move before you reach the purple creature, since by the time it starts acting up it will be too late for you to react. So, attack from a small distance and prepare for your next attack fast because there will be cases where the creatures will show up one after the other in different lanes.

The purple creatures come in various forms, some of which are harder to defeat than others. The most reoccurring ones need only one attack to be defeated but there are others, such as the giant ones that hold a hammer (which you should probably avoid if you don’t want to turn into a pie), need two attacks, or the shielded creatures that need two attacks as well (one for destroying their shield and one for finishing them off).

Personally, I found the flying enemies the ones which are the hardest to defeat because you need to jump at the right moment, and unfortunately air combat is tricky- most times either I miss or I get attacked instead. Taking care of one is easy enough but when more of them show up it’s extremely difficult to escape unharmed.

Apart from the evil purple creatures, obstacles include walls, spikes, and the occasional falling in emptiness during a jump, because I think I forgot to mention that the game takes place above ground! 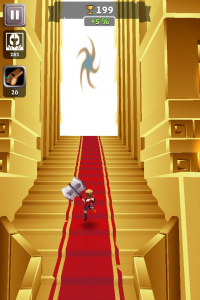 On your way, you collect golden coins, treasure chests (the content is always a surprise and ranges from coins to armors and other valuables), and essence, which are orbs that you can use for reviving your character in case you die in a crucial moment, or for buying items from the store. Needless to say, essence are hard to come by. There are also runes to collect and every time you get one, a small board appears at the bottom of the screen showing which ones you still need to find to complete the set.

For help you are given a pet (or pets, since you may have more than one), which you can call forth by using the whistles that the game provides for you. When your pet is summoned you ride on its back and face enemies more easily and activate the pet’s special ability which extinguishes the enemies in front of you by double tapping. The first pet you get is a silver wolf and there are more to unlock, usually in treasure chests but you’re gonna need plenty of essence to achieve that.

Which brings us to the IAP part of the game, and what it has to offer. The game's main currency is gold and the premium currency is essence. For those who want to buy expensive items, the game offers coin and essence packs with ranging prices. With coins you can purchase treasure chests that hide many surprises. Depending on how rare the loot inside is, they cost more, with the most expensive one being the “onyx” treasure chest that costs 200 essence. In addition you can purchase weapons, boosts, armor and more. 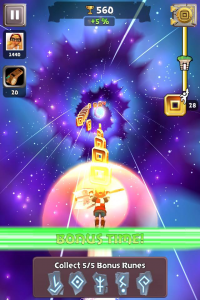 Gorgeous 3d graphics, beautiful crystal-clear colors, and cartoonish character designs offer a great game experience and truth be told, the game wouldn’t be as appealing without them despite the challenging gameplay.

The BG music is fun, light-hearted and yet it has this epic feeling to it. The sound effects are also fitting and well-chosen for the game.

Blades of Brim is a game that you won’t put down easily once you start, and before you know it an hour or more will have passed without noticing it. It is a captivating, addicting, and an all around magical game with unique elements that place it at the top of the endless runner games list. If you have enjoyed Subway Surfers before, now you’re up for an even greater surprise. It will be hard to be let down by Blades of Brim so check it out and share with us your thoughts in the comments below!