Home
Articles
Game Review: Lara Croft Is Back, and This Time She Goes in an Epic Relic Run

Game Review: Lara Croft Is Back, and This Time She Goes in an Epic Relic Run 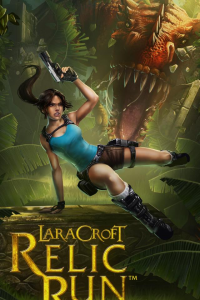 Tomb Raider will always have a special place in my heart as it was the first set of games I played on PC. Despite how outdated the graphics for the earl Tomb Raider games look with today’s standards, those games are still among my favorites and I always go back to playing them when nostalgia hits me. That doesn’t mean I don’t like the new ones however; I love them, and that’s why seeing my favorite heroine appear on the app store filled me with great joy.

Lara Croft: Relic Run is, as the title suggests, an endless runner game. But don’t let that discourage you because it’s a game in which a lot of effort has been put into and it probably has much more quantity and content than most non-runners. But let’s see in detail what this game has to offer.

A Tomb Raider game can’t be without a good story, even if it’s an endless runner. In Relic Run, our famous archaeologist is in a quest to find what happened to another fellow archaeologist and close friend of hers in Cambodia. When a shadowy conspiracy threatens the world, Lara Croft must collect clues to find ancient relics and find the truth behind those strange occurrences.

There’s nothing unique or fundamentally different regarding the way you play on Relic Run. Similar to all endless runners you swipe left and right to move in those directions, swipe up to jump and down to slide under fallen trees or ruins. What makes Relic Run to stand out and captivate the player is how well-organised, detailed, challenging and faithful to the Tomb Raider atmosphere it is. 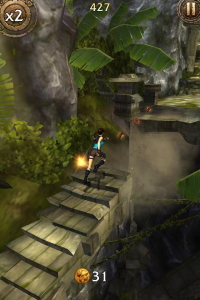 Lara’s appearance is reminiscent of her earlier days, with her light blue tank top, short brown shorts and black knee-high boots. Of course she carries her pistols with her and her signature gloves. The game’s look, includes many polygons and not because they couldn’t come up with better visuals but probably to pay homage to the classic Tomb Raider games.

As usual Lara finds herself among ruins in a tropical setting with many traps set not only by ancient civilizations to protect their secrets but by nature’s forces as well. To make matters worse, lizard people attack you from time to time and you have to aim really well to take out as many as possible. But even all these in-game features are too mainstream for Lara Croft so an even more deadly enemy has been added, which is the T-Rex! For those familiar with the games you know how iconic the T-rex is to the franchise’s older games and I believe you’ll be delighted by this guest-star!

What stands out the most in the game are Lara’s stunts. I wow'ed more times than I can count while seeing her doing parkour stunts and all that in slow-motion! The details in her movements and the harmony in her actions have left me in absolute awe! I haven’t seen her performing those impressive moves in a game before and I just can’t get enough of them now!

During her adventure she will also make use of a vehicle and the same rules of swipes apply here too. When you eventually lose, you will be rewarded with a hilarious dead (or fainted, I haven’t yet decided which is) body of Lara that is lying down in the most awkward positions! It certainly makes the frustration from losing much more bearable, and trust me you’re gonna have a lot of game overs, even only seconds in-game.

I won’t lie, Relic Run is a difficult game. Probably the hardest endless runner I’ve played. Lara is running in incredible speed and sometimes my movements are not fast enough to catch up with her, which consequently leads to her demise. But that's not the only difficulty in the game; the tropical environment in which the game is set has many large plants blocking the view and not knowing what’s behind them makes it hard to act fast when you finally get to see what the next obstacle is. 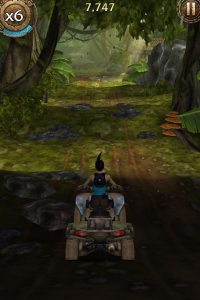 Also, every time you start a game the level is different than the previous, to make the gameplay more challenging and to avoid memorization. Keeping your eyes open and improving your reflexes is the only thing that can take you far in Relic Run.

As far as collectibles go, you will come across coins, magnets to attract coins, clue boosters that help you find relics faster, maps, and other power-ups. When you lose you can start from where you left by using a resurrection Ankh but because these things cost a lot, use them only when you are far into the game and not in an early stage.

There are a total of 2 worlds in Relic Run, with the 3rd being in the works and I have to say, the 2nd one is even harder than the 1st. I still haven’t managed to reach far and my pride won’t let me stop even when my phone is overheated.

The IAP purchases include currency and various item packs purchases. More specifically, you can buy coins or gems (the rarest currency) that you can then use to buy items, outfits and improve the power ups, or purchase packs or weapons, upgrades and a full pack of outfits. Excluding the gems that are hard to find, the coins are the easiest to collect because they’re almost everywhere and before you know it you’ll have more than enough to get various items. It’s a fair system that doesn’t force you to buy anything via IAP. 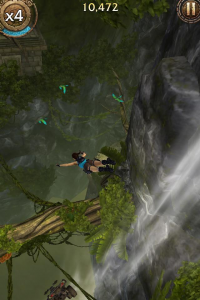 The graphics look great and as mentioned earlier the polygons are there on purpose (in my opinion) and the details are amazing on the ruins, the lizard people, and nature altogether. Lara looks stunning, with no edges (thank God!) and sexy as always. The colors are not very bright and kinda moody to capture the feeling of the isolated place and ruins.

The music is great and I as a Tomb Raider fan I absolutely love it. It’s serious and increases the intensity that is already present in the gameplay.

In conclusion, Lara Croft: Relic Run is a worthy addition to the franchise and a game that both fans and not will enjoy. Even if you’re not fond of endless runners, this one will most likely change your opinion about them. There’s just too much to appreciate in that game and the effort that was put into it shows that it’s worth your time. It will soon become your addiction.