Gabriele Cirulli Interview: 2048 Has Become A Part of Everyone's Culture

Earlier this year, gaming community exploded with applause when Gabriele Cirulli's 2048 launched online as a browser game that tasks players with basic arithmetic more addictive than the Threes! and more rewarding than the Flappy Bird. 20-year old Italian web developer turned famous overnight, with over 30 million people playing his game for hours on end and sharing their results on social networks, spreading the highly contagious vibe.

Six months later, Android and iOS ports of 2048 sport stellar ratings while the web version of the game runs very well on any modern mobile browser so people on Windows Phone or other non iOS/Android mobile device can enjoy it without restrictions. A multitude of clones flood app stores and Internet almost on a daily basis, though none is nearly as successful as Cirulli's 2048. In his blog, Gabriele explains why he chose to make it an open source game. 2048 was inspired by the web game also called 2048 and an app 1024!, “I made my own version, just for fun in a weekend, as an attempt at building something enjoyable. I really wasn’t expecting the amount of attention it would get. I really liked 1024, but I felt like the pace was a bit slow, and that was one of the reasons why I built 2048,” he said.

Here at D3k, we are very fond of 2048, and covered the news when it broke, and even posted some tips and strategy ideas for those who got hooked on a simple and infuriatingly addictive brain trainer. I can't tell you how much time each 2048-related article took because every now and then we'd indulge into that 'just one more time' obsession, which makes the game a black hole for productivity.

Today, we digitally sat with Gabriele Cirulli to ask him about his major success, and how it affected his life, as well as give the fans a sneak peek at what Gabriele is up to now. 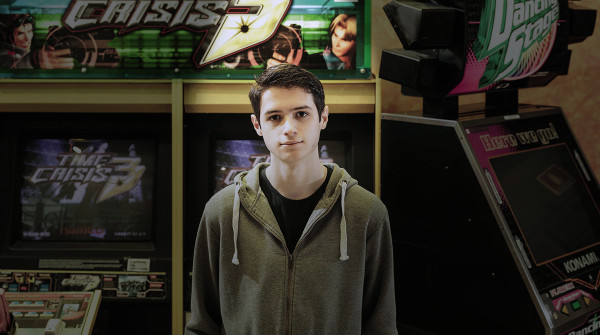 What is your opinion on the numerous 2048 clones on both Google Play and AppStore that use your code? Do you consider them as your competitors?

I think a big number of these competitors appeared because I used the so-called MIT license for my open-source code. That license allows anybody to use the code (even commercially) for their own products. It was a choice I made before I had any clue that 2048 would become as huge as it eventually did, but in the end I think a lot of its success was also due to its open-source nature.

Why do you think it was your version of 2048, and not the other numerous clones of clones, that got so popular?

I’m honestly not sure. I think it was a combination of the way it became famous (through an IT-savvy community like Hacker News), its open-source nature that allowed people to build things around it and develop a stronger connection with than the one you’d get just by playing, and probably also because of how easy it is to start and continue playing after you lose—it’s almost addicting!

Many reviewers compare your version of 2048 to Flappy Bird. It is free, addictive and basically endless. Dong Nguyen even admitted the harmful effects of Flappy Bird on human psyche. 2048 is an anti-productivity game that sucks users in. Have you ever received negative user feedback where users were utterly unhappy with the addiction factor? Or, is it always the praise?

I’ve heard of a lot of people wasting countless hours playing the game instead of being productive, but they were still somewhat praising the game, since it still seemed to give them enjoyment for their time. Most people would also somewhat blame themselves for getting stuck in the loop, even though I’d sometimes read some witty remarks about the game being terribly addictive. 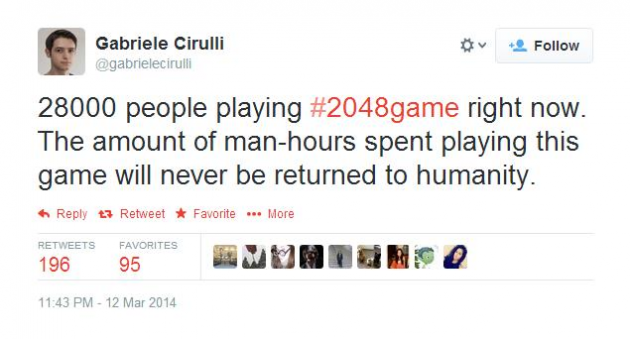 What are the most common features, if any, that users request to be added in the next update? Are you working on updates at all?

At the moment I’m not working on any significant updates, and I believe the core of the game will remain the same. A lot of people requested the possibility to undo their latest move, mainly because it’s sometimes easy to ruin a game by moving just once in the wrong direction. I never got around to implementing that feature, though, because I think the gameplay would be affected by it and it’d become way easier to win!

You are a celebrity in the tech industry now. Has the 2048 success changed your life?

It has definitely changed my life, and opened up some possibilities that I hadn’t envisioned before. Fame eventually fades away, but people still sometimes recognize me and praise me for the game, and it’s always nice to hear them talk about it. I still see some mentions of 2048 around the internet every once in a while, and seeing how it became a part of everyone’s culture is just very humbling.

Has the interest in 2048 receded yet?

It is not as huge as it was before, but there are still tons of loyal players enjoying a game or two every day!

Did you beat your own game?

I did beat it, even though I only managed to do so a few times in total. I’m pretty sure I never reached 4096, which is a tile many of the more skilled players have gone way beyond.

Any update on the Windows Phone 2048 app?

Unfortunately, I didn't have enough time to dedicate to a Windows Phone version, and as a result I won’t be able to publish one. I hope the players on this platform will still get a lot of enjoyment out of the clones that currently exist!

In your article, you explain your motivation to create the mobile versions for Android and iOS, as well as elaborate on what made you change your mind about monetizing it. You wrote the code for mobile games all by yourself and deserve the right to profit from your hard work. Besides, it is a once-in-a-lifetime opportunity you can't miss. Do you receive negative feedback about your change of heart, or is the mobile and developer community fully supportive?

When I published the article and application, the general response was very supportive. This was something I wasn't expecting, so it felt very reassuring. The people who commented on the article generally agreed that I should have a chance to make what I can out of this, even just for the sake of my own well-being and sanity. In retrospect, I think this was a good choice and I’ve now completely gotten over the issues I had, which is something I think wouldn't have happened if I weren't to choose this path.

What games do you like to play besides 2048 and the likes of it?

I’ve been playing Team Fortress 2 a lot, recently, but I’m not a hardcore gamer. I spend a lot of my day working, so there’s not a lot of time left for games! I also really enjoyed BioShock Infinite, which I think was a great game overall.

Are there any other games in development in your workshop right now?

I don’t have anything in active development, but some ideas might be brewing!

As a designer and web developer, what are your favorite past or current projects?

I’m currently working on Impraise, which is a new way for employees to give constructive feedback to each other and develop in the workplace. It’s been a challenging project so far, but at the same time very rewarding. I really enjoy working on new and innovative things!

It was so exciting to get a sneak peek at the real person behind the iconic game, of which we are loyal fans, and find him a very modest and hard-working talented young man who does not get carried away by fame. Download3k thanks Gabriele for his time and wishes him the best of luck in his new endeavors, and we sure want to see a new game!

2048 by Gabriele Cirulli is free and available in web, iOS, and Android versions.