Firefox Beta for Android is receiving some improvements to help users modify their home screen to open favorite web sites faster than ever before.

The latest Firefox Beta released on Google Play allows users to play around with the thumbnail grid of previous sites visited which show up when starting the browser inside the Android OS. Firefox users can now pin any web site that they like to the page. The pages shown in panels based on your past browsing history can also be tweaked as needed.

Getting away from Google is a must for some users who avoid using Chrome and opt for Firefox instead. Those users will be happy to learn that it's now possible to run multiple search engine searches for a single search query. This way Yahoo, Bing, Wikipedia, Twitter or e-commerce site Amazon.com can be run simultaneously right from the address bar.

Home Panels are now included with Firefox Beta for Android. These can be added individually to the web browser and include web apps from the likes of Instagram, Vimeo and Pocket. 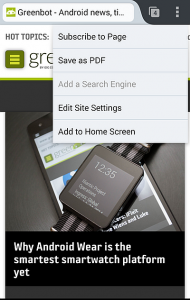 Visit a site you like and click the Menu options (a vertical … on the opposite side to the address bar). You'll then be presented with several options including Subscribe to Page, Add to Home Screen or Save as a PDF.

Subscribing to the page lets you grab the RSS feed. The Add to Home Screen bookmarks the page as one of the thumbnails on the home screen as discussed above. The PDF option is also a nice option to have.

Getting Around Commercial Internet Ads

There is now a Reading List feature which is similar to Safari on the iOS or Mac OS X systems. Firefox Beta for Android can extract the article copy and removes graphical elements like advertising to just leave a clean reading experience. Not really a feature you'd expect to see in Google Chrome given that the majority of Google's revenue base derives from advertising.

A new clear history option has been included in the history panel. The browser now supports Swype with a web site address auto-complete feature. 54 languages are now supported too.

On the more technical side, the Vibration API was updated to match new W3C specifications. Support for ARMv6 chipsets and Android version 2.2 has been discontinued. Android L preview is not supported and the browser will not run on it.