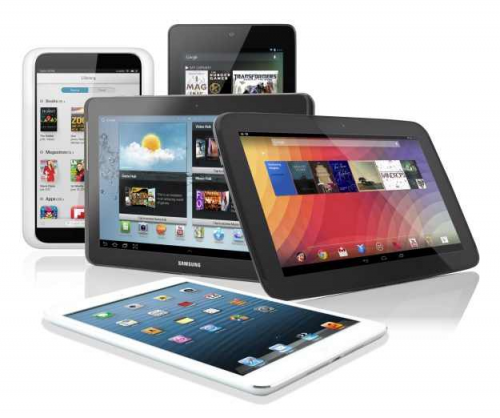 According to a statement made by Best Buy CEO, tablet sales are currently in the process of “crashing.” But such a broad generalization doesn't really tell the whole story. As of now, tablet sales are actually still increasing – they're up by about 11% in the last quarter alone, to be exact. So why would anyone say that the market is declining when clearly it is still growing?

While an 11% quarterly increase in sales might seem positive from an uninformed perspective, that type of growth pales in comparison to the 60% tablet sales increases that we saw just two years ago. With that statistic in mind, it is easy to see why many experts feel that tablet sales are tapering to a closing point.

Well, tablets (and the iPad in particular) have a lot going against them right now. In particular, three factors are actively slowing down tablet sales at an exponential rate.

First and foremost, smartphones are shipping with much larger displays, putting them in direct competition with their larger tablet counterparts. In fact, some smartphone models are so large now they are being called “phablets” because they appear to be a mix between a phone and a tablet.

Here's the issue – when most people buy a tablet their intention is to use it to view information while on-the-go. The problem is, the larger smartphones on the market can do everything a tablet can do and more, and it is fair to say that a 5.1 inch smartphone is a lot more portable and convenient than a bulky 10 inch tablet. In that regard, the only benefit a larger tablet has over a smartphone is that it is better for viewing media and/or playing games.

Another factor that seems to be slowing down tablet sales is that people simply don't want or need to replace their tablet as often as their smartphone. In the smartphone market there are frequent developments and updates that make the newest phone much more appealing than its predecessor. For example, most people would be more inclined to replace their Galaxy S4 with an S5 rather than buying the newest version of the iPad when they already bought one last year.

A tablet bought this year will likely be just as appealing and useful next year as it is today. The same cannot be said for flagship smartphones. Furthermore, cell service companies like Sprint and Verizon make it easier for people to trade-in their phone for the latest model if they're under a contract.

Why is the iPad Getting Hit the Hardest?

The iPad is expensive – it costs a lot to make. Unfortunately, other than Apple aficionados, not many people see a reason to opt for a $400-$500 iPad when there are competitor brands that sell similarly sized tablets for much less. Businesses in particular are not very motivated to buy the most expensive tablets for their employees. This leads to a market that is favoring tablets that offer a balance of cheap cost and ideal size, with not many consumers opting for the advanced models like the new iPads that are coming out.

What do you think? If you had to choose between a new tablet and a new “phablet” right now, which would you buy?