Biggest Firefox Update in 3 Years Makes the Browser Look a lot Like Google Chrome â€“ Trying to Compete or Just Stay Around?

Mozilla Firefox just released its biggest aesthetic update since 2011, completely revamping the look of its browser with features that make it look a lot like its leading competitor Google Chrome.

It appears that Firefox is making an attempt to stay competitive with other browsers (especially Chrome) as techies around the world seem to be preferring the more streamlined and simplistic interface of Chrome over Firefox.

The new update, version 29 which has been dubbed “Australis,” is literally the biggest change to Firefox in history. The design overhaul comes at a strange time, just after Firefox's co-founder and CEO Brendan Eich stepped down following a public outrage regarding his views concerning gay marriage.

In addition to design changes, the update also incorporates a few new features and changes in functionality. The new Firefox main menu is centralized in the top right corner and packs all of the primary features, preferences, controls, and add-ons into a neatly organized and easy-to-navigate interface.

The conventional Firefox design has been thrown out the window in favor of a button-and-tab-based look that has some users thinking Google might've secretly acquired Firefox and has turned it into a different flavor of Chrome. With that said, Mozilla has maintained that the primary focus of the update is to make all options and preferences easily accessible while also allowing for complete customization of the browser interface.

A single glance at the new Firefox could make you mistake it for Chrome for a number of reasons. First, the tabs are now rounded and the menu buttons in the top-right corner look almost identical to Chrome's. The top of the browser is also thin and gray, just like Chrome's – but these similarities are just a few in a long list.

The effort to look more like its leading competitor is most likely in response to the sharp decrease in popularity Firefox has experienced in the last couple years. As of November 2013, Firefox only held about 18% of the desktop browser market, and that figure was at 31% just three years ago. Meanwhile, in the same timeframe, Chrome has gone from being the default browser on 13% of desktops to a whopping 41.5%.

That means that in just three years Chrome has practically dethroned Firefox and has turned the tables, going from one of the least popular browsers to one that occupies almost half of all desktops. Google also appears to be having the same success with its Android operating system, as in 2010 in shipped in only 20% of all smartphones, whereas last year it shipped in about 80% of all smartphones. This incredibly fast growth could be pushing us towards what could become a Google monopoly.

With this type of expansion in Google's favor one has to ask themselves whether Firefox has updated its interface to compete with Google Chrome or just to maintain some semblance of importance in a browser market that is being dominated by Chrome and Safari. The real question is, how many of the remaining loyal Firefox users will switch over to Chrome once they realize that their favorite browser has become a spinoff of Google's industry-leading browser.

Download Firefox 29 from Download3k.com or go to its Homepage. 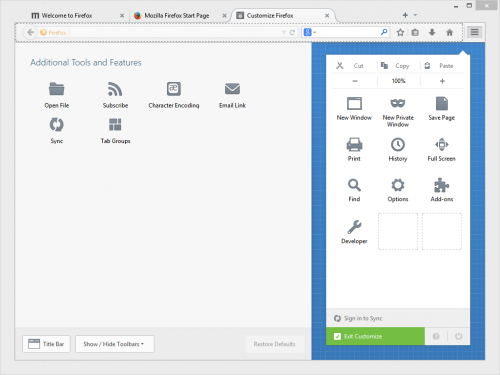