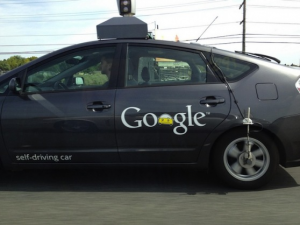 It looks like we could see self-driven cars reach the mainstream markets within the next decade or so if Google continues to make progress at the current rate. The tech giant that started out as a simple search engine has been venturing into all sorts of industries lately, from mobile phones to smart contacts.

Although many experts have stated that we won't be seeing the first self-driven cars available to consumers until at least 2025, Google representatives have stated that it could actually happen as early as 2017. The autonomous driving software has been appropriately named “Google Chauffeur.”

Google's “autonomous driving” project has been going on for a couple years now, with their “self-driving cars” frequenting the rural roads of Nevada, Florida, and California. However, Google says that their automated vehicles are now starting to learn some of the more complex driving behavior required to uphold safety in densely packed urban traffic.

Google released a blog post on Monday stating that their self-driven vehicles have now logged nearly 700,000 miles of autonomous driving. The project developers say that with each mile they're becoming more confident that they'll reach the goal of creating a software that allows vehicles to “operate fully without human intervention.”

The first challenge will be to master the city streets of Mountain View, California – the home of Google's official headquarters. After conquering its hometown, Google plans to begin testing the vehicles in other large cities.

Training Vehicles to Recognize Objects and Analyze Their Behavior

To accommodate the often unpredictable events that take place in city traffic, Google has begun training its autonomous driving software to locate and identify hundreds of individual objects, including pedestrians, bicycles, street signs, traffic lights, crossing guards, trees and other landscape features, and even litter that could present driving hazards.

The software is also learning how to analyze the behavior of people and objects (i.e. - detecting when a cyclist is about to make a turn based on hand signals or anticipating when a pedestrian is about to run out in front of traffic). Most importantly, Google is teaching the software how to handle emergency situations in which things don't go as planned or expected (i.e. - preventing an accident when a motorist runs through a red light).

So Will Autonomous Driving Software Ever Drive Better Than Humans?

Surprisingly, Google and many tech pundits agree that eventually self-driven cars will become much safer and reliable than vehicles driven by humans. This is due to the fact that the software will be able to log and track hundreds of variables during every second without compromising performance due to fatigue, distraction, or any other issues that plague human drivers.

Theoretically, self-driven cars should be able to achieve perfect driving skills in due time. Autonomous vehicles will be preloaded with information about upcoming speed limits, turns in the road, detours, weather and traffic conditions, and a variety of other factors that would simply distract any human driver trying keep track of all of that data simultaneously.

Check out this video to see the self-driving car in action during its latest rounds through the Googleplex in Mountain View, California:

#news #google
Comments (0)
< PREVIOUS ARTICLE
How to Disable Remote Administration Tools and Why
NEXT ARTICLE >
Biggest Firefox Update in 3 Years Makes the Browser Look a lot Like Google Chrome â€“ Trying to Compete or Just Stay Around?