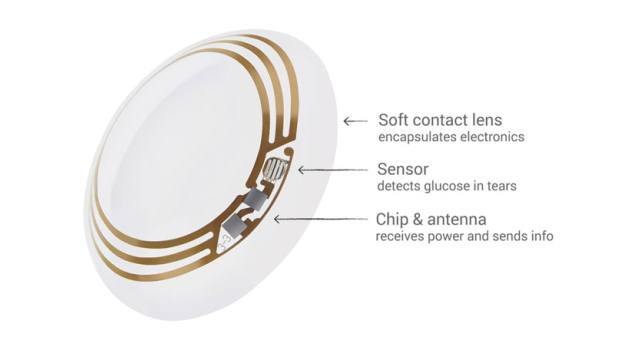 Google hasn't even announced the official release of Google Glass yet and they're apparently already working on developing smart contact lenses.

These high-tech lenses will come equipped with a minuscule camera, and there have even been suggestions that there will be a version of the contacts capable of reading blood sugar levels to help diabetics avoid unnecessary medical issues.

The new smart contacts are more than just rumour and conjecture, as Google just secured two new patents on the futuristic lenses last week. Google has even begun discussing approval with the FDA, which would be necessary before smart contacts could reach consumers.

There hasn't been any mention of when we can expect to see these devices on the market, but Google has stated that they have been running clinical trials on working prototypes.

A New Way for Diabetics to Stay Alert

The smart contact lenses for diabetics will be able to instantly notify the user when their blood sugar levels experience any significant drops or peaks. According to Google, prototypes have already been tested that can produce accurate readings once every second. Google has also mentioned the possibility of using miniature LED lights to indicate when blood sugar levels are getting too low or too high.

Google says anther potential use for the camera-equipped contact lenses is helping people with vision disabilities through their everyday activities. The lenses could be paired with image recognition software to determine when the wearer is approaching an object or vice versa.

For example, the camera could spot an incoming vehicle in the peripheral of the wearer's vision and issue a warning that gives them enough time to get to safety. Furthermore, smart lenses might one day be able to interface with headsets to provide detailed walking and room navigation directions to the blind.

Accepted for Medical Use But Criticized for Recreational Use

Smart contacts seem to be getting the same criticism that Google Glass is facing - many consumers just aren't happy about other people recording them without their permission using a device that could easily be considered an advanced spy tool.

However, people seem to be okay with using smart contacts for medical reasons like aiding the blind and helping diabetics. Still, there seems to be a fine line between using wearable computers for assistive purposes and abusing this technology for eavesdropping, as only the wearer knows their own intention. For example, how hard would it be for someone to claim that they're a diabetic when they're really just using smart contacts to eavesdrop?

In a world where many Google Glass wearers have already been called "Glassholes" and some have even been attacked, many social tech experts feel it may take a number of years before the majority of the general public accepts the idea of smart contacts and other wearable computers.

#news #google
Comments (0)
< PREVIOUS ARTICLE
Microsoft Moving on From PCs to Focus More Mobile Devices After $7.2 Billion Nokia Acquisition
NEXT ARTICLE >
How to take a Screenshot of a page in Chrome or Firefox using these top Extensions or Add-ons