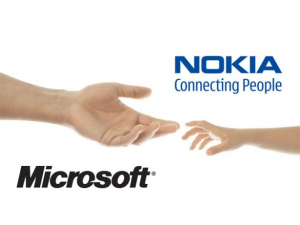 A couple days ago a Nokia representative confirmed that Microsoft has officially completed its acquisition of the recently struggling mobile phone giant. Prior to being sold to Microsoft Nokia had been losing much of its sales to competitors like Samsung and Apple. Many experts feel as though Microsoft's involvement in the company will help to maintain its significance in the mobile device market.

However, Microsoft's $7.2 billion purchase of Nokia appears to be more than just a minor addition to the tech giant's lineup. Microsoft's corporate vice president Tom Gibbins has stated that the recent acquisition will make the strategic relationship between Windows Phone and Nokia (originally announced in 2011) even more efficient and intimate. Gibbins has also stated that we should be seeing many more mobile devices shipped with the latest software advancements from Microsoft already built-in.

The Nokia acquisition is expected to push the primary focus of Microsoft in a new direction. The long-time software/operating system manufacturer seems to be making its stake in the hardware industry, taking on a burgeoning $50 billion mobile device market.

The fact is, the vast majority of people around the world have never owned a PC, and thanks to new device types like smartphones, tablets, and wearable computers, it is likely that our old desktops and laptops will become a thing of the past within the next few decades. Microsoft has clearly recognized this transition and is making an effort to stay relevant by putting more resources towards the mobile hardware sector.

Now that Microsoft owns Nokia, it has instantly positioned itself as the second largest mobile phone manufacturer by sales volume. The company will now be directly competing with Samsung and Apple for the #1 spot as the world's largest mobile device manufacturer.

Microsoft Adapting and Building Upon Nokia's Technology, Not Pushing the Name

Although Nokia will go on after the acquisition, Microsoft will reduce the company's focus to three core departments – Advanced Technologies (the licensing and developing branch), Nokia Solutions and Networks (NSN), and HERE (formerly known as Ovi Maps).

However, the name “Nokia” itself will not transfer to Microsoft as a trademark. Instead, Microsoft will only be taking on the trademarks Lumia and Asha – the Nokia trademark will remain property of the original Nokia owners and, according to the details of the acquisition, we're not going to be seeing any devices released under the Nokia brand name until at least December 31st, 2015.

Microsoft's limited interest in using the Nokia name has shown that the purpose of the recent acquisition was not to revive Nokia as a brand, but to use some of the company's technological successes and strongpoints to further the distribution of hardware that is designed for the Windows Phone operating system. In other words, Nokia's newest phones will likely be released under the Microsoft brand name, not the other way around.

Nokia confirmed the closure of the deal two days ago. Since then various experts have suggested that Microsoft will be using its newly purchased hardware technology to further bolster the popularity and prevalence of the Windows Phone operating system, which may soon be shipped as the default operating system in as many mobile devices as Google's ultra-popular Android OS.