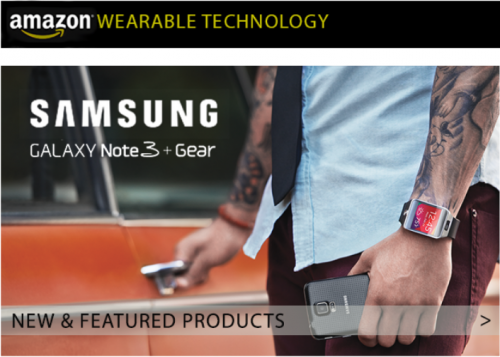 With the wearable computer market expected to blossom in 2015 it is no surprise that Amazon – one of the internet's largest retailers - is now opening a web store just for wearable technology. From smartwatches to Google Glass-like headsets, smart contacts, and fitness bands, the wearables market is rapidly expanding as major players like Samsung, Acer, and Google prepare to release what appears to be the first round of popular wearable computers released to the mainstream.

Although Amazon has not yet announced whether it will be designing a wearable of its own, the Kindle developer just launched Fire TV and is venturing into all sorts of new tech areas, so it wouldn't be surprising to see Amazon release its own wearable computing device within the next 2-5 years.

At the moment the new wearables web store is dedicated primarily to smartwatches, wearable cameras, healthcare monitoring wearables, and fitness & wellness wearables. There is also a section for wearables geared towards families, kids, & pets. With a number of headsets (including Google Glass) likely becoming available over the next 48 months it is probable that Amazon will add a headset section to the store in the near future.

In the official press release covering the launch of the store, the Director of Wireless and Mobile Electronics at Amazon, John Nemith, stated that the company is “thrilled to bring its customers” the opportunity to learn more about this new realm of devices. The store's Learning Center contains an extensive video library that is packed with product trailers and in-depth buyer's guides.

The wearables web store will come equipped with all of the same perks as the rest of the Amazon site, including editorial and customer reviews, product suggestions, best seller's lists, and of course Free Two-day shipping for Amazon Prime members. Of course, users can also refine their search for specific wearables using Amazon's renowned search filtering capabilities.

Right now the store is split into four main sections from the home page: New & Featured Products, Featured Brand (which spotlights a specific product or brand from the wearables department), Coming Soon, and Editor's Corner (an interesting blog covering the latest in wearable technology). Currently the most popular items in the wearable technology store appear to be the Samsung Gear and Pebble Steel among others.

When you visit the wearables technology web store Amazon lists this section of the site at the top of its search categories (above the 'All Departments' option), as you can see in the screenshot below: 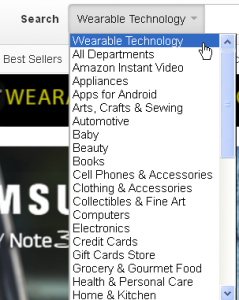 The placement of the store within the search interface is evidently a strategic move to draw as much as attention as possible to this newly added section of Amazon's web site. The online retailer clearly wants to be one of the company's to profit the most off of the wearable computer boom that is expected to occur during the next 5 years.

You can visit the Amazon wearable technology web store here.