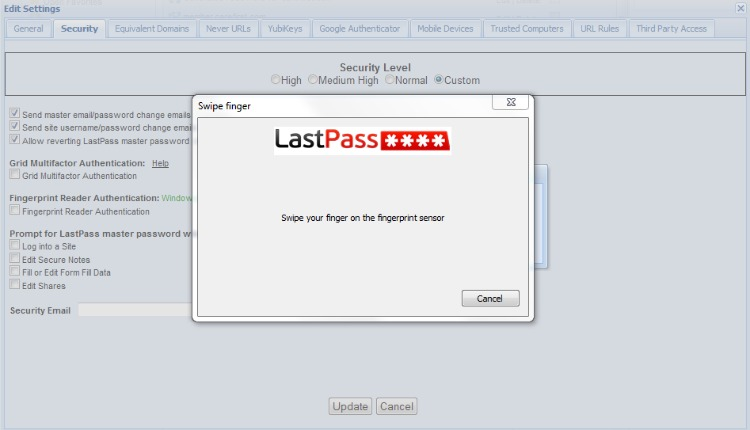 Owners of the Samsung Galaxy S5 get another chance to use one of the most interesting and unique features in their smartphone now that the popular security software LastPass has updated its software to support fingerprint scanning. The new feature was officially announced yesterday on the LastPass blog.

LastPass has stated that the new biometric fingerprint scanning mode will allow for faster and more secure retrieval of password data. After logging into LastPass you can now use your fingerprint to access locked credentials; any time a user is prompted to enter in their PIN or password they'll have the option to use their fingerprint instead.

Faster, More Secure Logins - Appropriate Use of the New Technology

Users will be able to swipe their finger briskly across the screen and a reading will determine whether the fingerprint matches the master user's fingerprint. This feature could prove to be helpful when an individual is in a hurry or if they feel as though someone may have already gained access to their passwords.

LastPass is one of the first programs to integrate support for the Galaxy S5's fingerprint scanning, and being that this is a security software that stores passwords, it may in fact be the most appropriate application for this technology.

So Is It Possible For This Type of Authentication to Be Hacked?

Unfortunately, recent news stories have revealed that the Galaxy S5's fingerprint scanner and the iPhone 5's Touch ID can both be fooled by replica fingerprints cast from wood glue.

Apparently, a resourceful hacker could snap a picture of a fingerprint left on the phone's touchscreen surface and then boost the contrast and printer settings to allow for the creation of a mold that could then be set in wood glue to create a fingerprint replica sufficient to trick the phone's fingerprint scanner.

This type of hack could be performed by anyone with the casting equipment, a smartphone (to snap a pic of the fingerprint) and the time/willingness to research.

So Does This Mean That LastPass Users Should Avoid Using the Fingerprint Scanning Feature?

There is a slim-to-none chance that you'll ever encounter someone who will gain access to your phone, snap a picture of your greasy fingerprint, and then use it to create a mold that will grant them access to your device.

So although this security feature has been theoretically circumvented, the likelihood of this becoming a mainstream security issue is very low because of the resources and circumstances required to make such a “hack” work.

A real threat could arise if hackers figured out how to infiltrate the fingerprint scanning software and trick the authentication process remotely through malware. When that happens then there may be a cause for concern, but for now the alleged security flaw is not something that the average user has to worry about unless they live with someone who is an advanced techie with access to wood glue molding equipment.