Home
Articles
World Wide Web: How And When The Internet As We Know It Was Formed

World Wide Web: How And When The Internet As We Know It Was Formed

Nowadays, the internet is an inseparable part of our everyday lives. However, some of its users do not really remember how life used to be without it, as if it existed forever. In reality though, the internet as we know it was not always like that. In this article you’ll find out what the World Wide Web is, how it's different from the internet, and how it was created.

What’s the difference between the World Wide Web and the internet?

The “www” acronym found in most websites originates from the World Wide Web, and no, it’s not related to 666, as some people claim. 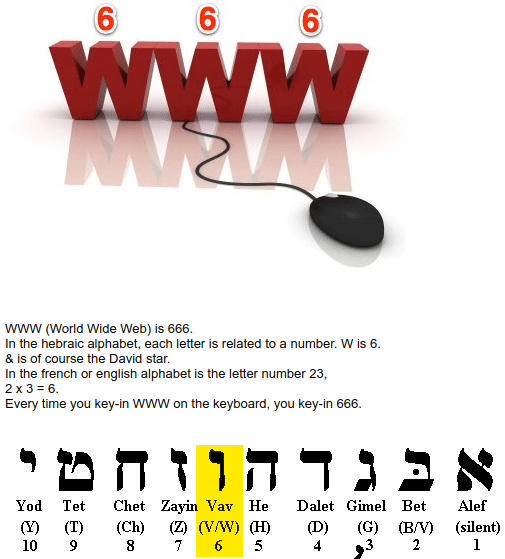 So, as the history of the internet as a network begun on the '50s with the first applications of packet networking, and later with ARPANET and other networks, the Internet as we know it and use it today (through the World Wide Web, that is) is several decades younger. 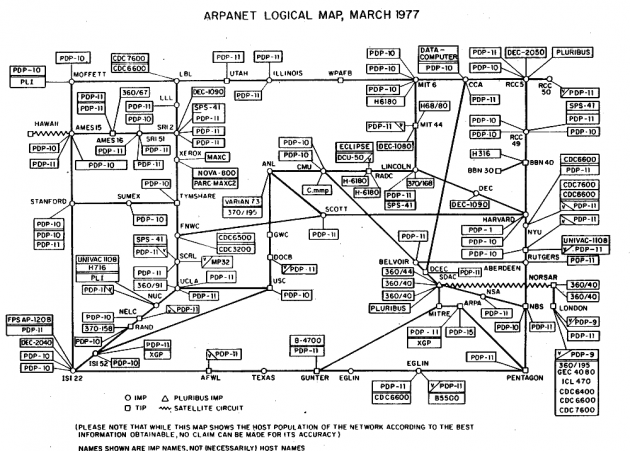 The idea behind the World Wide Web

Most of you have probably heard more or less about CERN, the European Organization for Nuclear Research located in Geneva. It is the largest experimental nuclear research center in the world, and among other things, it also hosts the Large Hadron Collider (LHC).

In 1980, Sir Tim Berners-Lee (born in London in 8th June, 1955) used to work at CERN as an independent contractor for software issues. His initial contract had a duration from June to December 1980, but in 1984 he returned to CERN after being offered a permanent position. One subject that Berners-Lee was involved in was how information could be transferred more efficiently among scientists on an international level, while using different computers and presentation programs. 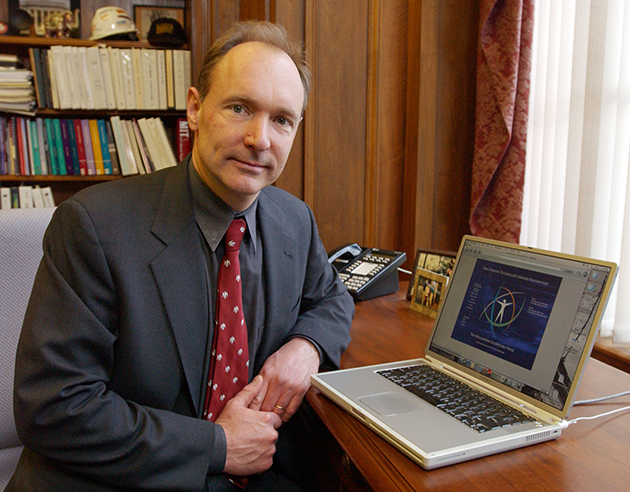 Soon after his return, the TCP/IP protocols were installed at CERN's central computers. This action transformed CERN within a few years into the largest internet representative in Europe. It was the ideal environment for developing the web.

The first suggestions and names

In March 1989, Tim Berners-Lee made a proposal for the creation of “a global hypertext system with printed links”. It should be noted at this point that the term hypertext was the name for text appearing on a computer screen or another electronic device. The term was first used officially in 1965 by Ted Nelson. Nelson is also the father of the term “hyperlink”, which is the well-known link as we know it today. 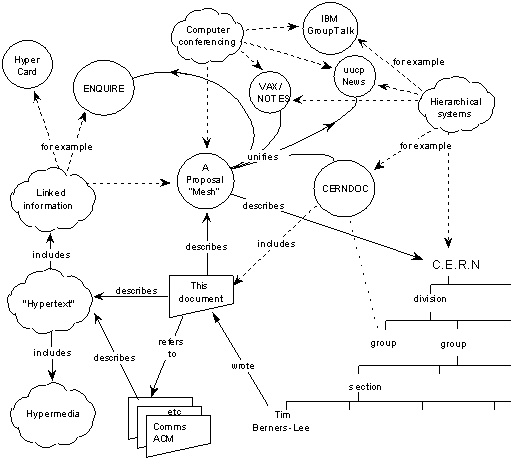 Tim Berners-Lee’s proposal did not attract much interest, but his supervisor, Mike Sendall, urged him to create an implementation on a NeXT workstation that was recently acquired by CERN. 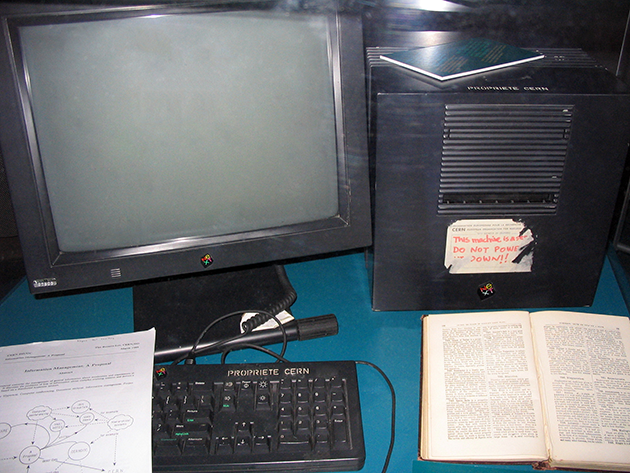 Berners-Lee thought of several names for the project, such as:

Eventually, however, he decided on World Wide Web.

In the process, Tim Berners-Lee found an enthusiastic Belgian supporter: Robert Cailliau. In fact, Cailliau is also the designer of the web’s first logo. 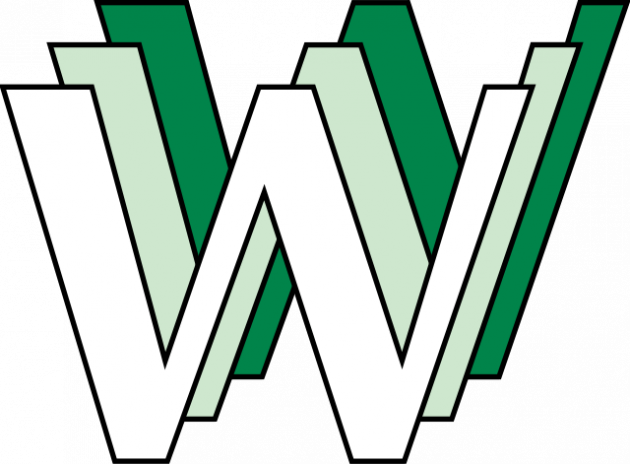 In September 1990, the two of them made a presentation of their ideas at the European Conference of Hypertext Technology. Their presentation did not have any significant impact however; Berners-Lee and Cailliau did not find anyone who was interested in combining hypertext with the internet.

The first tools and the birth of the World Wide Web

By Christmas of 1990, Tim Berners-Lee had created all the tools that the World Wide Web needed. They are practically the same tools used today: 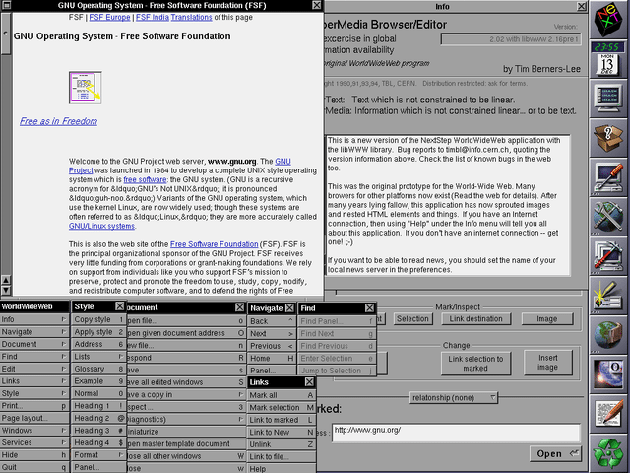 In fact, the web browser was completed on Christmas Day, December 25, 1990. Given that a browser is required to navigate within the web, it is quite accurate to consider that date as the first birthday of the World Wide Web.

To convince CERN staff to use the Web, Berners-Lee uploaded a page with CERN's phone book. Previously, users had to connect to the mainframe to look up a number.

In January 1991 the first web servers were set up outside CERN. On August 6, 1991, Berners-Lee published a project summary in the alt.hypertext newsgroup, looking for collaborators for further development.

In September 1991, Paul Kunz from the Stanford Linear Accelerator Center (SLAC) visited CERN, and the World Wide Web took his attention straight away. On his return to SLAC, Kunz took the NeXT software with him and the librarian Louise Addis adapted it for the VM/CMS operating system in IBM’s mainframe for displaying a list of SLAC’s online documents.

This was the first web server outside Europe, and the first in the US.

The first photo on the web

In 1990, graphic designer Michelle De Gennaro, who was a CERN employee, teamed up with Angela Higney, Colette Marx-Neilsen and Lynn Veronneau to form a parody pop group. The band’s name was “Les Horribles Cernettes” (=The Horrible CERN Girls).

So, they wrote several songs and achieved a lot of success in the field of physics, since they used to play in conferences, at the World'92 Expo in Seville, and at Georges Charpak's party when he received the Physics Nobel in 1992.

Silvano De Gennaro, Michelle’s husband and band manager, took the photo below in July '92. He wanted a photo for their first CD. 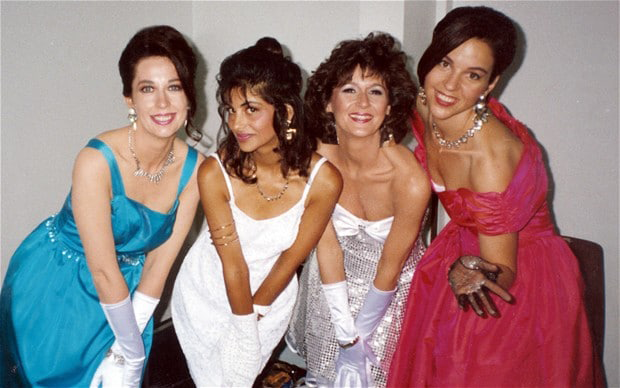 The occasion for the photo was the Hardronic Music Festival, an annual “rock festival” that was organized in a music club within CERN.

In 1992, after the band’s performance at the CERN Hardronic Music Festival, Tim Berners-Lee asked Silvano for some scanned photos so as to test his software. The image given by Silvano was the one he composed based on the photo he took for the band’s CD cover. This image turned out to be the first photograph ever to exist in World Wide Web. 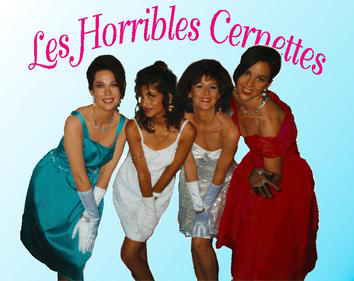 It is worth mentioning that Les Horribles Cernettes continued to play for 20 years and gave their last show in 2012.

In its early years, the World Wide Web was mainly adopted by research departments in universities or physics laboratories, such as Fermilab and SLAC.

In 1992, www.books.com was created by Book Stacks Unlimited, based in Cleveland. It was the first online store on the World Wide Web, and it allowed purchasing books using credit cards. Today, this domain belongs to Barnes & Noble.

In January 1993, there were 50 web servers around the world. Until October 1993, more than five hundred web servers were operating.

Until 1995, a few thousands websites were created. Some of these proved to be of particular importance, and you can find a list of them on Wikipedia.

In order to find websites, users usually bookmarked popular directory websites that listed the limited, at the time, websites. Some of them were indexed using the Wide Area Information Server (WAIS) that allowed searches, as would later be performed by search engines.

In 1993, the first web comics made their appearance on the web: Doctor Fun and NetBoy.

During that period, and with the web becoming more and more popular, several companies started creating their own websites, and a significant growth in e-commerce was took place.

In 1995, Jeff Bezos launched Amazon.com, and at the same year Pierre Omidyar founded AuctionWeb, which was later renamed to eBay.

In 1996 IndiaMART was established in India and ECPlaza in South Korea. These are the first business-to-business (B2B) marketplaces.

In 1999 the Alibaba Group was founded in China, which is now the world’s largest retailer, and is active in more than 190 countries.

In 1999, Napster was also released, the first application for downloading songs over the internet.

Low interest rates in the years 1998-1999 allowed the creation of many start-up businesses.

At that time, the idea of an internet business was a big deal for investors, and as a result, many people who did not have the proper business knowledge or a solid plan, attracted investments of millions of dollars.

In 2001, however, and with a large number of new internet-based companies having failed to make a profit, the bubble burst and countless websites went bankrupt.

The supremacy of the internet (2002-today)

Businesses and websites that survived the dot-com bubble burst set the standards for a better and financially stronger online presence. Learning from the mistakes of the past, new websites and companies were created later and made it to the top of the internet, such as LinkedIn (2002), Facebook (2004), YouTube (2005), Reddit (2005), Twitter (2006) and many, many more.

So, now you’re probably a bit more aware of how and when the internet was created and formed to what it currently is. If you have any additions or notes, let us know in the comments section below!