The HTC Nexus 9 tablet is becoming a hot item for people who love the plain vanilla version of the latest Android before the hardware manufacturers have gotten their dirty little mitts on it and slapped their own OS skin over the top of it. As a result, the OS runs faster and smoother. That's on the inside. On the outside, it is a good idea to add to the basic Nexus 9 by buying a case to protect it from unintended dings, dents or scratches.

Here is our round-up of some of the best keyboard, folio and other types of tablet cases made especially for the impressive Nexus 9 tablet from HTC. 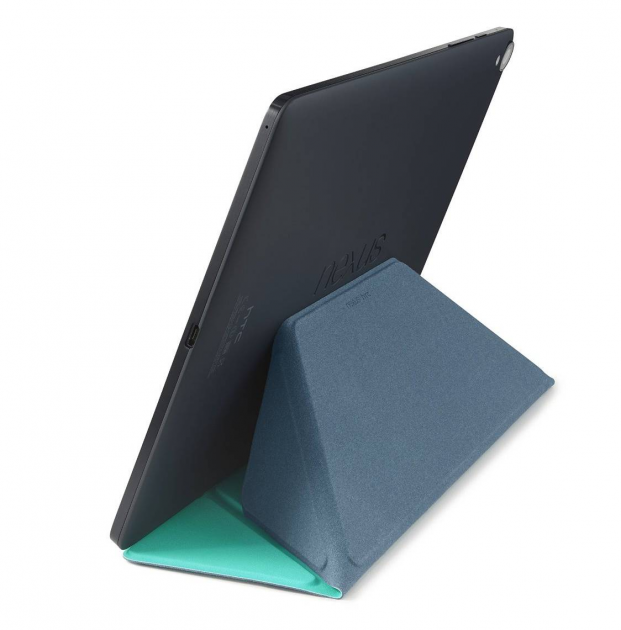 It can be folder up into various shapes depending on how you wish the tablet to be oriented. A flat cover when the tablet is lying flat on a table, but able to be folded up and used as a stand as well. There is usually a two-tone color design. The cover is somewhat robust but not altogether strong. 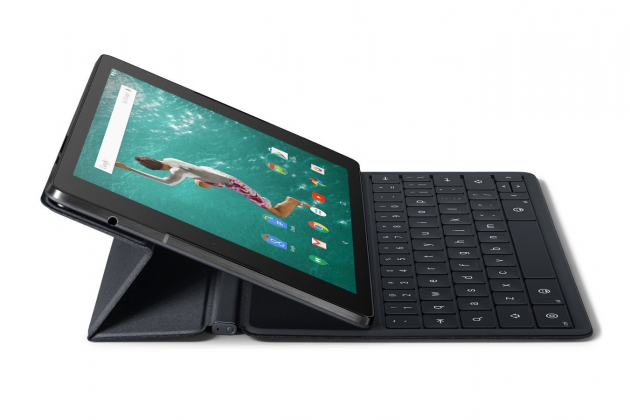 The Keyboard Folio is the HTC keyboard case which uses Bluetooth to provide better typing abilities. The case adds both considerable thickness and heft when carrying around the Nexus 9 tablet. However, for business and personal users who expect to use the tablet for typing documents longer than a couple of paragraphs, producing lengthy emails and other important activities where a real keyboard is offered will find this one ideal.

The keyboard is not a fully one, so typing can feel a little cramped until one adjusts to it. It does have real mechanical keys with tactile feedback though which certainly feels much better than typing on a cold glass screen. The arrow keys will be very useful for people who do a good deal of editing which can be pesky to deal with on a mobile device most of the time. There are dedicated search and return function keys. Some extra functions may not work if a third party keyboard app has been added to Android 5.0 by the user.

The price sits around the $130 mark which makes it a purchase that needs some considered thought before taking the plunge. 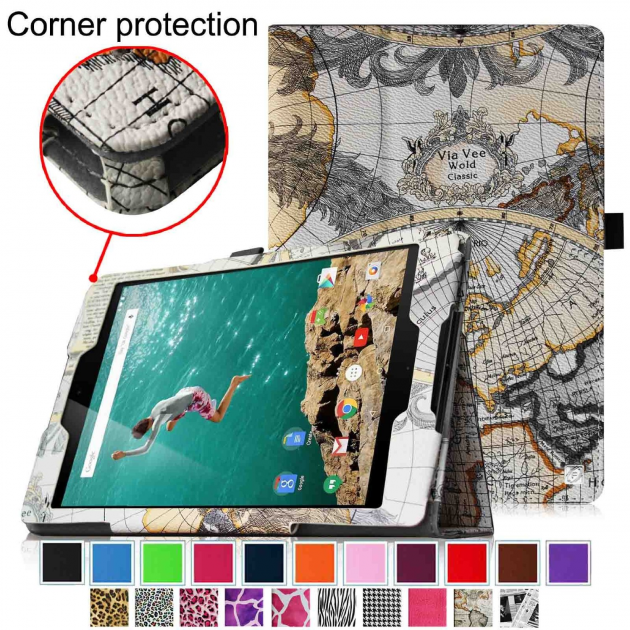 The Fintie SmartShell case is a stylish package which acts as a folio case but comes in 8 patterns and 11 colors to pick from. The map design is particularly eye catching and ideal for anyone who wants to appear to be the world traveler.

The Nexus 9 tablet clips nicely into the molded back which feels secure enough. There are the usual cut-outs to provide access to the ports and controls that add functionality to the slate. This magnetic cover also stays closed to protect the glass display while in a bag. There are also auto-sleep and auto-wake functions when the cover is opened or closed.

The price is discounted by some retailers from $35 closer to $20 presently. 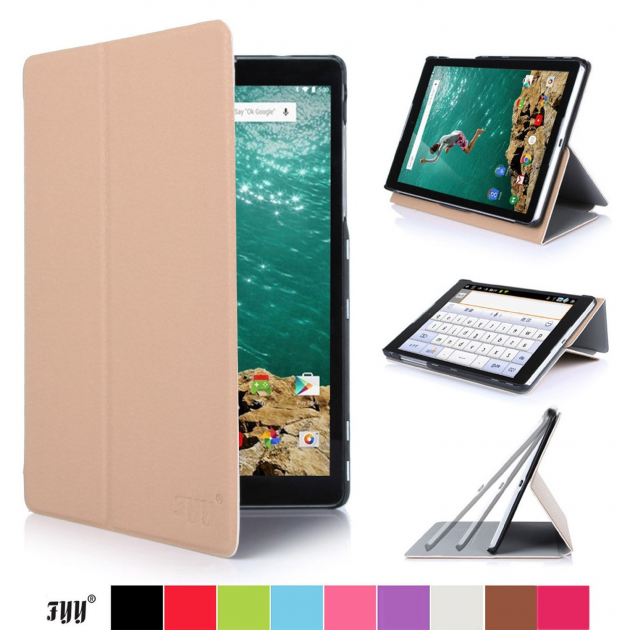 The FYY Premium Nexus 9 leather case adds a touch of class to the tablet. A folio case from the front, the case can also morph into a landscape-oriented stand with multiple angle options. Some buyers are having difficulty getting the tablet to stay in place with the stand. There are many different color choices including gold, black, red and cyan. 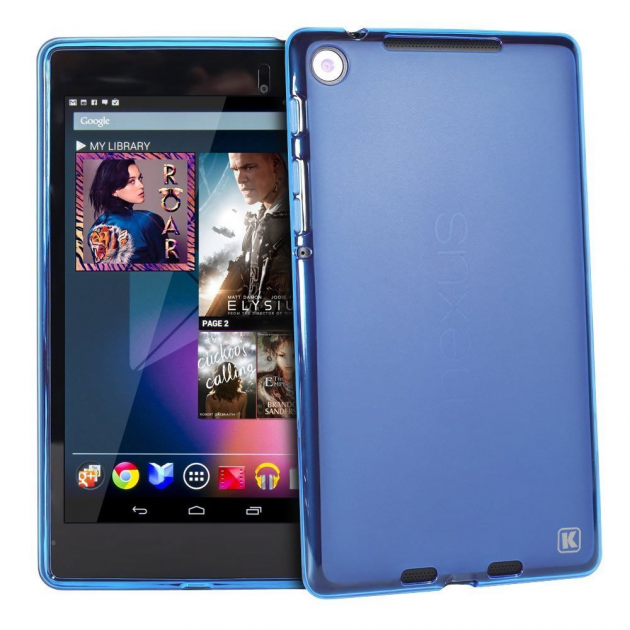 (Image of the Nexus 7 case)

The Kaycase Slim Soft Gel Cover Case is designed to be extremely easy to hold with one hand. The case doesn't fully cover the front – only the edges – so it will be better suited to people who keep the tablet at home but still would like a protective cover for the back.

There are three colors to choose between: Black, Blue and Frost Clear. The light blue is quite bold and the most attractive one. Cut outs ensure access to all the controls on the side. 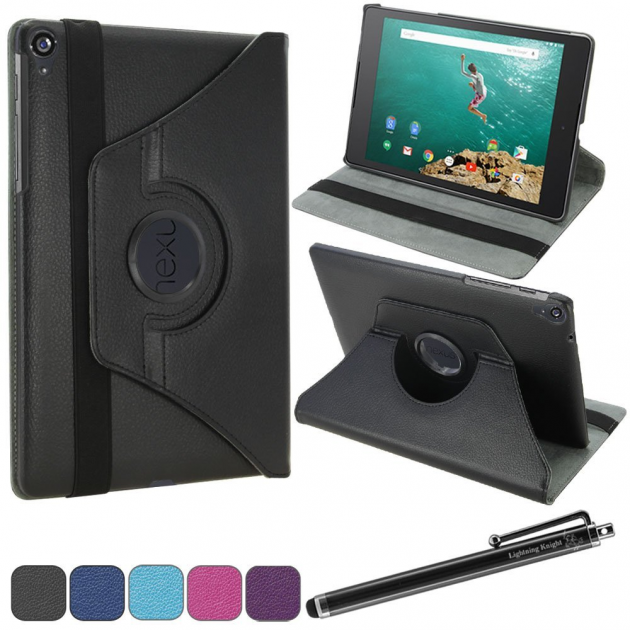 The LK 360 Rotating Smart Case is the ideal case for people who like to have some flexibility with the orientation of their tablet case. With quality leather and emphasized stitching, the case looks the part. Available in 10 color choices including black, hot pink and everything in between.

There is a rotation plastic wheel at the back of the case which allows it to turn around and place in landscape-orientation for easier reading of large documents or for watching a movie. The thick elasticated band pulls double duty at a way to hold the tablet in the stand in landscape and also goes around the outside when it is closed to ensure the Nexus 9 stays protected at all times. The auto-sleep and auto-wake functions are also helpful too.

Available for under $9 from some retailers. 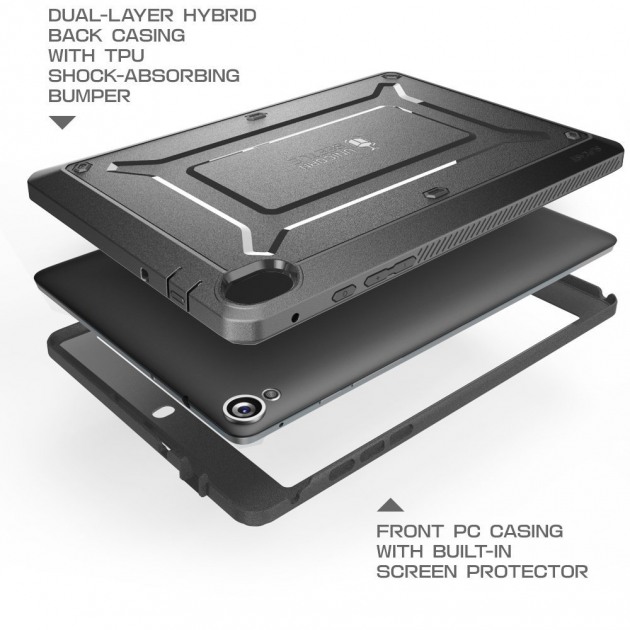 The SUPCASE Unicorn Beetle PRO case is for heavy-duty protection for the active traveler and business executive who needs to ensure that the Nexus 9 will arrive in good working order. The front has its own front casing with built-in screen protector. The case is shock resistant and dust proof. It has covered ports so that they will not get damaged accidentally or have dust or debris go inside the exposed area which could prevent the port functioning correctly later.

The screen protector itself is wavy when viewed when the tablet is off. Some buyers may prefer to cut it out and replace it with a different screen protector instead but that may reduce the front protection if doing so.

Pricing is very reasonable for this level of protection at under $40 which is reduced by some retailers by half.

Hopefully you've found a case above that suits your needs. There are many good choices already available for the HTC Nexus 9 and more being released all the time.