The future of smartphone batteries and mobile device charging in general could be radically transformed during the next few years, as an Israeli tech company called StoreDot has revealed a next-generation battery that goes from dead to fully charged in just 30 seconds. The amazing battery was unveiled at Microsoft’s recent Think Next Conference in Tel Aviv on the 7th of April.

At the conference a demonstration video showed a Samsung S4 smartphone receiving a full charge from zero in less than 30 seconds. At the moment the battery is simply a prototype, but StoreDot has stated that it should be available in retail stores within three years at the latest. 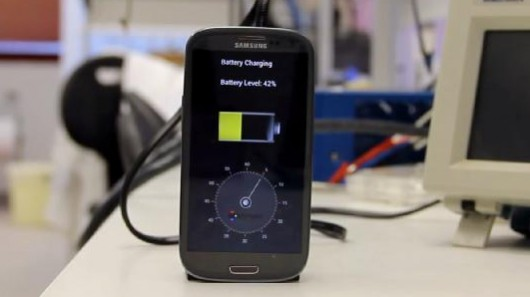 So When Will These Batteries Be Available?

The challenge at the moment is integrating the battery into smartphones so that it can fit into the devices. The company's founder, Dr. Dom Myersdorf, has stated that he believes the battery could be modified to fit into smartphones within one year and be ready for retail distribution within three years. At the moment it looks like we'll be waiting until at least 2016 until we see the first top-of-the-line mobile devices equipped with these batteries.

The only downside is that these batteries will be a least twice as expensive as currently available batteries, primarily because they will be at least 30%-40% more costly to manufacture.

The new technology utilizes nanodots that are derived from bioorganic material. These microscopic nano-crystals were initially discovered about a decade ago at Tel Aviv University during research studies related to Alzheimer's disease.

The new biological batteries operate based on a completely different concept than the current lithium-ion batteries. The company claims to have developed a new type of electron that has been deemed the Multi Function Electrode.

In addition to drastically speeding up battery charging times, the new type of battery will also significantly increase the lifetime of battery packs because they'll be able to withstand thousands of charge cycles without wearing down.

The main problem at the moment is that the prototype of the battery is actually the size of a laptop charger, which is obviously not practical, but StoreDot has stated they are confident that they'll be able to reduce the size considerably within the next two years.