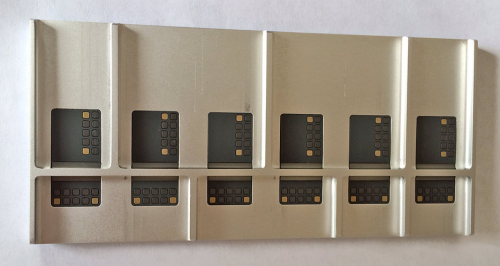 The Google Ara project is set to revolutionize the way many people buy and use mobile phones in the near future. The goal of the project is to create a modular cell phone that can be assembled and configured according to the user's hardware preferences and budget. Google's Advanced Technology and Projects (ATAP) department has a working prototype that is supposedly near completion and could be unveiled before April 2014th comes to a close.

The new type of phone would allow users to customize and upgrade their devices on an ongoing basis, individually replacing virtually every component including the processor, keyboard, memory chip, battery, screen, microphone, and any other piece of the phone. Users would buy an empty phone frame with nothing but the ports attached and then they would be free to buy and install new components as they wish.

The Ara phones will create an open hardware platform in which a phone could be quickly and easily upgraded and modified in the same manner as a PC. Perhaps even more exciting is the fact that virtually any type of electronic component could theoretically be attached to the main modular unit. In fact, according to MIT (who conducted a review of the pending prototype) it will even be possible to connect a module that reads blood oxygen level, or a module that allows for night photography.

Modular Phones May Bring High-Tech to the Less Fortunate

While it may seem as though these new modular handsets would be geared towards the upper class, it has actually been suggested that they will be made available to people in developing nations, where the cost of upgrading to the latest handset every year isn't practical for the average citizen. Instead, a consumer could buy and improve their smartphones one component at a time, gradually constructing a better device as they go along.

Although it is an admirable cause – creating a hardware platform that allows people to easily and affordably obtain the latest smartphone technology as their budget allows – it may be difficult for Google to persuade some of the world's tech giants to change their incredibly profitable whole-device upgrade sales structure.

Modular Hardware Components To Be Manufactured By 3D Printers

Another interesting point to note is that the components for these new modular phones will be printed out using 3D printers by a company called 3D Systems. Google is also working with a design company with the goal of letting users customize the aesthetics of the phone (i.e. - a custom casing decorated with the artwork or color-theme of your choice).

3D printers are one of the most exciting technological innovations of our generation, making it possible to literally print out fully functional items that can be as complex as microchips and aircraft components. They are basically miniature factories that can construct an item of any specifications out of special plastic and metal molding materials.

While the initial upgrade components will be manufactured at a corporate location by 3D Systems, in the future we could see people ordering a phone upgrade (i.e. - a new processor) and then printing it out right from their desk at home.

How Good Can These Phones Get?

Unfortunately, producing a top-of-the-line smartphone like the Samsung Galaxy S4 using nothing more than a 3D printer might not be practical at the moment, so the first generation of modular phones will probably be more comparable to the mid-range cell phones that were popular 10 years ago. However, as technology advances it is certainly possible that high-quality upgrade components could be distributed to allow for the construction of some truly impressive custom smartphones.