With the 5.1 inch display, the S5 model recently announced by Samsung in MWC 2014 as their new flagship shares many of its predecessors’ features. The dimpled plastic backing that comes with a plethora of color options, the rounded edges and the phone’s elongated home button are pretty much standard characteristic for Samsung’s S series. But does that mean the S5 is a semi-reboot with few reasons to get fans worked up about it? Not by a long shot!

One of the features integrated in the Galaxy S5 consists of the new and improved heart rate monitoring sensors, which records data via fingertip input and sends it to the Health 3.0 application for analysis and results. Health 3.0 is also capable of tracking the number of steps taken during your exercises as well as the calories you melted. The comprehensive monitoring capabilities of the S5 make it an invaluable tool for keeping an eye on the effectiveness of your fitness program as well as your overall state of health, which is overall pretty neat.

Fingerprint scanning for a wide array of purposes

I know that the moment they read about this feature, thousands of diehard Apple fans will tear off their shirt screaming “PLAGIARISM” in a fit of rage, which to be honest would constitute a scene worthy of Mel Gibson’s Braveheart. But as much as witnessing such a glorious event would make my day, let me just tell you that there’s no reason to get all worked up. 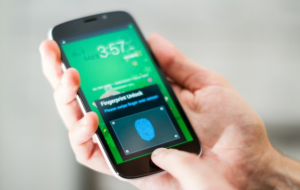 The fingerprint scanner of the S5 is entirely different (and, dare I say, more impressive) from the one of the iPhone 5. To put it simply, the S5 sensor works via a swiping motion rather than a long press, like in the case of the iPhone 5.

Secondly, the fingerprint scanner of the Galaxy S5 facilitates substantially more actions, including online purchases via PayPal, locking and unlocking the screen AND, most innovative, granting the owner access to the Private Mode. Private Mode represents the nether region of the smartphone where only the bravest fingerprint matching heroes dare to venture. Basically, it’s the place that’s kept hidden from the prying eyes of anyone else handling your phone, under the lock and key of your fingerprint.

An impressive camera with adaptable focus

It might strike you as odd that the 16 MP rear camera is able to shoot videos at 4k resolutions, considering the fact that the display of the Galaxy S5 is only able to render at 1080p. However, if we take into account the increasing accessibility and affordability of TVs with 4k resolutions, Samsung’s decision to include this high end camera no longer comes off as strange. The hybrid autofocus that’s able of locking on target in 0.3 sec timeframes sets a new record for smartphone cameras everywhere and the post shooting refocus adjustment only comes to sweeten the deal.

The CPU of the Samsung Galaxy S5 model is a quad core 2.5 Gigahertz Snapdragon 800, slightly trumping the Z2 from Sony, which had only 2.3 Gigahertz. However, the S5 only comes with 2 Gigabytes of RAM memory and this is by all accounts a strange choice. In terms of storage space, you can opt between 16 and 32 Gigabytes (be careful on the 16GB model though), but it can be extended to 128 Gigabytes via microSD cards (and SanDisk already launched one). This should be more than enough to accommodate the 4k resolution videos you shoot with S5’s camera! A black & white power saver option has also been included, and Samsung says the accumulator’s capabilities should account for 10+ hours of net surfing or 12+ hours of uninterrupted video rendering.

When is it coming out?

Samsung announced that the public release date will be April 11, 2014 for the original batch of 150 markets. While there are few speculations with regards to the price of the S5... well, a flagship model is a flagship model, so don’t expect it to be cheap. After all, you did just read its specs, right? All in all, the newest member of the Galaxy S family is a highly anticipated smartphone and, irrespective of whether you’re a fan of the brand or not, it constitutes an excellent option for those of us who are on the market for a new high end mobile device.