Media headlines are all about Samsung releasing Galaxy S5 at MWC in Barcelona yesterday. The Korean company has been very keen on telling the world that Galaxy S5 is the next big thing. However, what the manufacturer did not tell us about is the amount of internal storage that will be available to end-consumers when they buy the latest Samsung Galaxy S5 smartphone. Initial reports from Samsung booth at Mobile World Congress in Barcelona suggest that as much as 50% of the device’s storage capacity is taken by pre-installed applications from Samsung.

Independent journalists from various tech outlets who have been able to lay their hands on the device confirm that the stock Galaxy S5 ROM is somewhat larger than the one of its predecessor. The official Samsung Galaxy S5 demonstration at MWC did not put much focus on native TouchWiz applications that will come pre-installed on the devices. Apparently, Galaxy S5 will ship with somewhat less bloatware than its previous models, but the larger ROM size and a 16 GB of internal storage suggest that the end consumers will have to squeeze their own files in approximately as little as 8 GB of storage left. 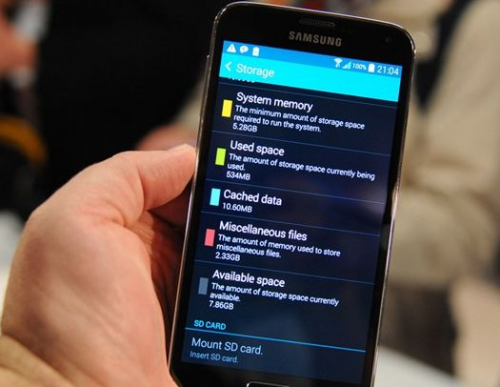 After Samsung started shipping the Galaxy Note 3 with 32 GB storage as the default, we kind of hoped that this trend will continue in other flagships from the Korean manufacturer. This is clearly not the case with the Galaxy S5, however. Reports from MWC suggest that the device showcased at the demonstration only offered about 7.86 GB of internal storage available to the end-user, which is some 2 GB less than the previous version of Galaxy offered.

Samsung devotees willing to purchase the Galaxy S5 flagship will be able to take advantage of the microSD card slot, which will allow them to expand the storage capacities up to 64 GB. If you are looking forward to hearing the release price and date for Samsung Galaxy S5 devices, stay with us for new updates on the topic.