New Android Version: All the New Features and Changes in Android Nougat

How did the new Android version get its name?

You've probably noticed that the names of all versions of the Android OS are sweets. In fact, they all start from successive letters of the alphabet. 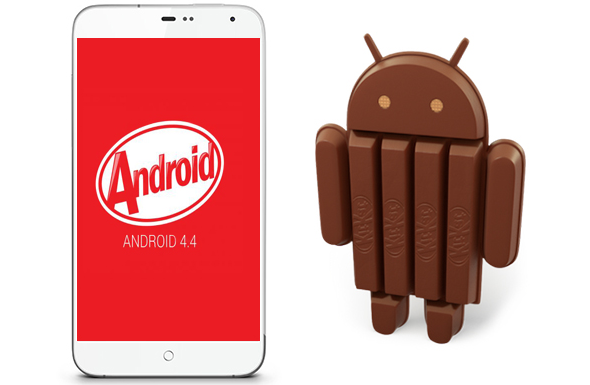 The next letter is N, so before finding out its name, it was codenamed Android N.

At the annual conference of Google developers, Google I/O, which was held in California this year (18-20 May), several announcements were made about Google's new products and services. Among them were the most basic changes in the new version of Android. As for the name, Google let the world decide.

Anyone who wanted could visit a special page and submit a sweet beginning from N. While many expected the name would be Android Nutella, it finally chose Nougat, probably for copyright reasons. 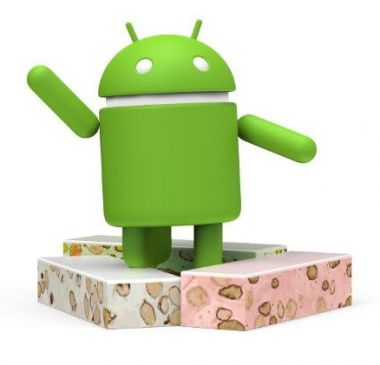 The most important new features

Below are the most important changes in Android 7.0 Nougat.

A very useful feature that was missing in the previous Android versions, is a split screen feature, for running two apps side by side. But now, we will be able for example to send messages to friends while watching videos on YouTube: 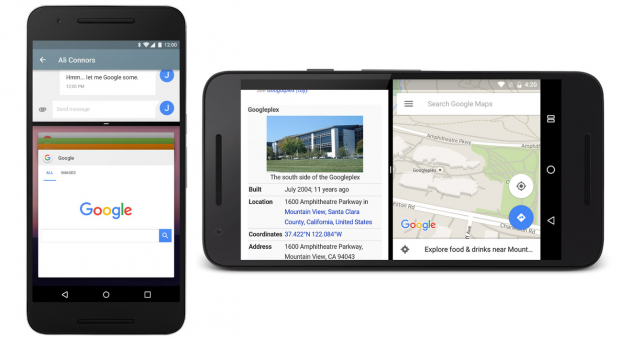 This feature already exists in some Samsung and LG models. Now, however, it will be available on all devices that will be released with this operating system.

Additionally, we can switch between the two most recently used applications by tapping twice on the "recent" button.

The notification area was redesigned, and has received major upgrades.

The clean version of Android Marshmallow (without any third-party plug-ins), the notifications appear by swiping from the top of the screen downwards, and by dragging it a second time we can see quick settings for Wi-Fi, the Bluetooth, audio profile, brightness, etc. Alternatively, swiping with two fingers downwards you could directly display the quick settings.

Now, with the new version of Android we can access some of these quick settings without having to swipe a second time. A second swipe will display all the quick settings in detail. 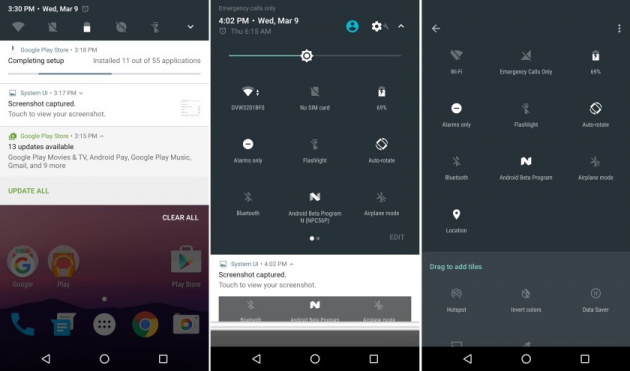 A very nice feature is the rearrangement of icons in notifications panel, so that you can position them in any way we want.

That's why Google decided to introduce the "Direct Reply" feature. It is now possible to reply immediately to a message sent from an app, directly from the notifications area. To do this, simply tap on the "Reply" button that appears under the notification and type the text you want to send. 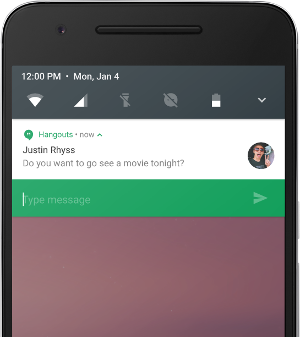 When there are multiple alerts from the same application, e.g. from Hangouts, then they are grouped for a better overview.

With a tap on the notification, it expands and each message is displayed separately, so that you can read it and perform any actions, such as a direct response. 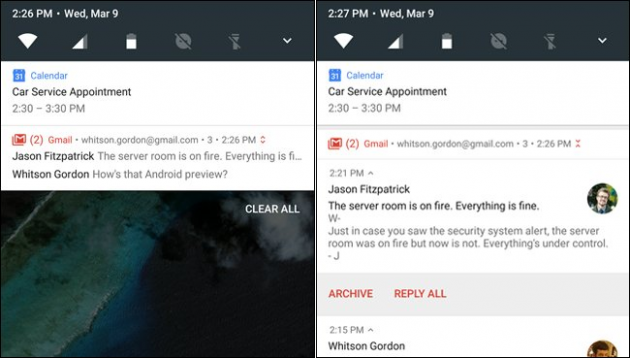 With the new Android version we have more control over notifications. A long tap on an alarm can immediately mute it, and we can also completely block all notifications from the application.

Android Nougat supports the Vulkan API (Application Programming Interface). In simple words, it is a set of "rules" and tools that game developers use in order to achieve best performance.

Some gaming engines have already incorporated the Vulkan API, so it is expected that some exciting games will be released for Android in the next months.

After Cardboard, Google launched the development of another virtual platform that goes by the name Daydream.

Daydream aims to provide high quality graphics with very low latency (i.e. quick response). It is supported by Android Nougat and will be available in selected smartphones this fall. As it was announced in Google I/O 2016, we will see mobile phones from Samsung, HTC, LG, Xiaomi, Huawei, ZTE, Asus, and Alcatel which will support the new platform.

Also, special projectors are designed for great comfort and will be accompanied by specific controls for better handling of games and applications.

Finally, we will be able to enjoy already existing content such as 360° YouTube videos, Street View and Netflix.

Apart from the above, there have been some other smaller improvements, but worth mentioning nonetheless.

Doze is a built-in operation system, introduced in Android 6.0 Marshmallow, which undertakes the task of putting your device to sleep after a long period of inactivity.

In Android Nougat, Doze is turned on more often and in more situations, such as when it is idle in our pocket. Thus, it contributes to further power saving. Of course, we will continue to receive critical notifications.

Moreover, there’s also the "Data Saving" mode. With this feature, we can stop background applications from connecting to the internet via the network in order to prevent unnecessary consumption of MBs in our data plan. Of course, we can also set some applications to have unlimited internet data usage as well. 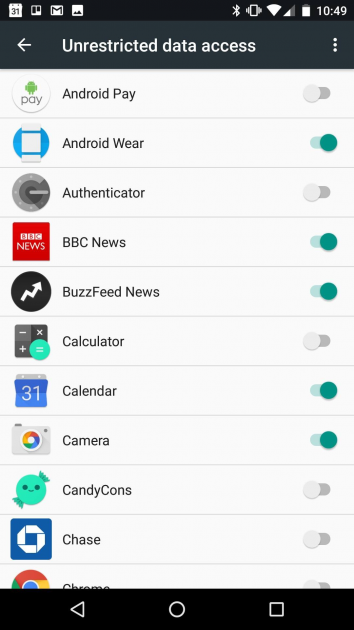 72 new emojis are now available for use in any application you desire, and their number reaches 1500 emojis in total. Also, you can choose skin color, by long-tapping on an emoji. 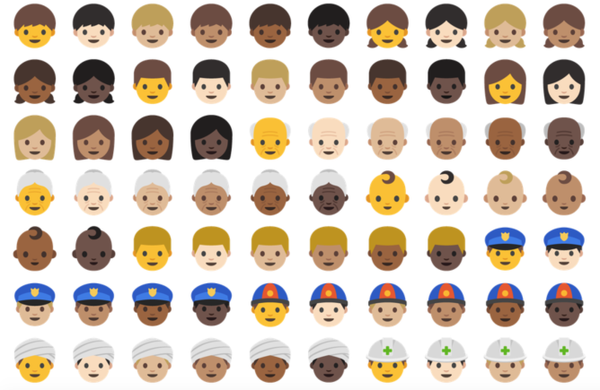 Moreover, applications will be able to adapt better to your preferences, based on your language, even if you know more than one. For example, when looking for content in an application, you can see the results in each of the languages you know, and you will not be asked if you want to see the translated version of a text that is in a language that you know.

Security and other improvements

In some new devices, software updates will be installed more quickly, and in the background, so that you don’t even have to think about them. No more restarts and never-ending updating of applications.

In terms of performance, with the "Direct Boot" feature the device boots much faster, and with the new JIT compiler, the application execution speed is improved, as well as their necessary storage space is reduced.

You can see what a JIT compiler on Wikipedia and StackOverflow.

A con in Android Marshmallow is a "Clear All" button in the recent apps screen. Anyways, it was added to the new version of Android.

Last but not least, the facial recognition feature is upgraded, and the settings area has a better UI. The "Suggestions" make the navigation in the settings screen easier.

In which devices will Android Nougat be available?

All of these new features and improvements are nice, but when is the new version of Android be available in my device?

Whether and when a device will be upgraded to the new Android version depends on the manufacturer's policy, the mobile phone carrier and the country’s market. Chances are that a smartphone which is 2 years old (or older) will not be upgraded.

Google has officially announced that it has already started distributing the upgrade package for the following devices: Nexus 6, Nexus 5X, Nexus 6P, Nexus 9, Nexus Player and Pixel C, and it will be completed in the coming weeks. 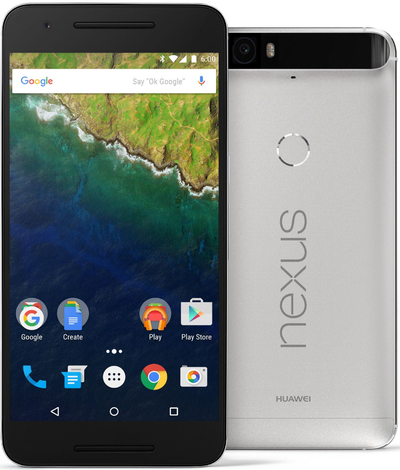 The Nexus 5 will not receive the new Android version, which is reasonable, since its end-of-life date was in October 2015.

Also, the first new smartphone with Android Nougat will be the LG V20, which was announced on September 6.

Samsung Galaxy Note 7, S7 and S7 edge will probably receive the upgrade, even though it may take a number of months until they do.

According to TechRadar, HTC will bring the new version of Android on HTC 10, One A9 and M9 One devices until the end of the year, but not on the One M8.

Finally, Motorola confirmed that the Moto G4 Plus will receive the Android 7.

What’s your opinion about Android Nougat?

Are you excited about the new Android version’s features and improvements or not? Do you have a device which will support the new version?

Don’t hesitate to post your thoughts in the comments section below!