There is a technology in social sciences sometimes referred to as notion substitution, when someone tries to persuade you that something is what it actually is not. This is what we see in tech industry all the time, especially in the post-Snowden era. After the major surveillance and snooping revelations, more users have become privacy-concerned, but a lot remained illiterate about what to look for in a tech product, if privacy and security is your concern.

As a result, we have witnessed an avalanche of 'secure' apps - Secret, Whisper, Yik Yak, and now Facebook's Rooms - that wear false flags of anonymity and, as a result, privacy. Whisper has been unmasked for tracking and storing user locations, investigating on users with posts Whisper deemed as newsworthy, and cooperating closely with Pentagon. Surprise-surprise. Secret appeared in a very bad position with the bullying issue, and even got banned in some countries, while its anonymity can be easily hacked. Yik Yak might have been the least stained of them all, with bullying being the major problem. Rooms, at the same time, coming from Facebook raises more questions than addresses users' need for privacy and anonymity.

The following list of apps will not include those gibberish anonymity apps for underage and mature bullies and sociopaths. However, at no point, do we endorse any of them, but we sincerely hope none of them will ever be engaged in dirty leaks and surveillance revelations. 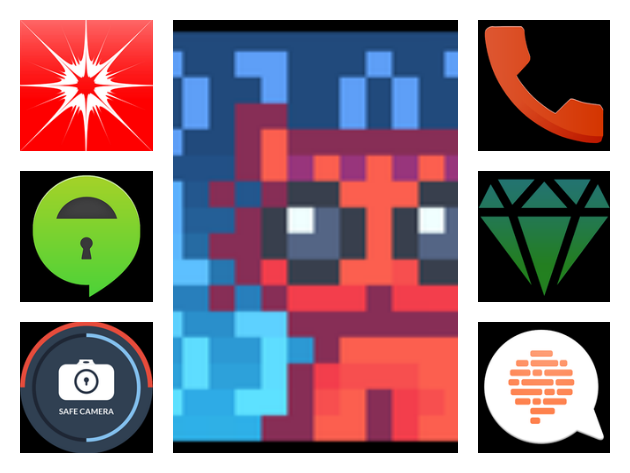 Cryptocat has earned some reputation the hard way - Apple blocked the app from iTunes in 2013, without explanation. The developer Nadim Kobeissi took the issue to Twitter in an effort to prevent the company from rejecting legitimate encryption apps in the future. As a result, the app has been restored on the App Store, and is now available as an iOS app and a browser extension. Also, the developer has been harassed by the Canadian government, demanding he'd grant access to his servers.

Providing en-to-end encryption, Cryptocat lets individuals and groups chat in encrypted chat rooms, and the developer states the servers are 'in a Swedish nuclear bunker.'

Confide encrypts messages and deletes them upon delivery once the recipient reads them. Targeting business users working in companies at high risk of industrial espionage, and aims to prevent the keyloggers and screen capturing spyware snap the contents of your messages. The app does not display the entire message, but reveals it when you swipe on words, one by one, for a short moment, then hides it again.

By Open Whisper Systems (not related to Whisper)

That's one of the apps recommended by Edward Snowden during his online interview to NY Festival we covered here.

Encrypted text messages sent via this app don't charge your carrier plan and are free. You can create groups and invite your friends to secure chatting, and you can even share various media files in the attachments. What I like most about TextSecure is the contents of your messages is not stored on the company's servers while the servers don't have access to your texts and user data.

Wickr is for the paranoid since its algorithms are dubbed as one of the strongest by privacy advocates. The developer also has pretty transparent privacy policy. The sender sets the self-destruction timer for each message while the company servers have no access to it, and your other data, and only your recipient will know who sent the message.

Gliph is an alternative to the above-mentioned apps, with one peculiarity - support of Bitcoin transfers, so it would be safe to assume its security focus is valid. It is this Bitcoin support that once got Gliph banned from the iTunes, but the devs' appeal let them restore it. The app's main focus is secure messaging for mobile, desktop and web users. The app uses your Wi-Fi, 3G or 4G connection to transmit data, and you can chat with one or multiple recipients in a group chat. Gliph also features Bitcoin QR code scanner.

I am seeing some lag and bug issues for free users, and as far as I can see the Android version hasn't gained much traction, but the features seem quite interesting, so you might want to check it out especially since there is a desktop version for Max, Win and Ubuntu.

The app uses military grade encryption algorithms to securely store your photos under a master password.

The same Open Whisper Systems endorsed by Snowden offers an app for secure phone calls with end-to-end encryption, tapping into your Wi-Fi to make and receive phone calls, your stock dialer and your device's contact list, so the user experience is pretty much the same.
Pros

Feel free to share your experience with the mentioned apps, or suggest more that fit the list in the comments below!