On Thursday, the Microsoft Office team tweeted that they reached the 12 million download mark, only one week after the long-awaited release of the Office for iPad suite. In addition to bringing in a record-breaking amount of downloads, the anticipated software suite also topped the list of the most popular iPad apps on the first day it was released on March 27th.

The increased number of downloads may be partially due to the fact that the new Office suite for iPad is offered in three separate apps – PowerPoint, Word, and Excel, whereas the Office suite for the iPhone and Android OS was available in one downloadable package.

The apps are free to download for all iPad users, but to do anything more than view files you'll need to upgrade to the paid Office 365 subscription, which costs at least $100 for the yearly Office Home Premium pass (lets you use the full version of Office on up to 5 Tablets and 5 PCs). However, Microsoft has hinted that they will be offering a slightly cheaper subscription package called the Office 365 Personal subscription later this spring at the reduced price of $70 per year for use of Office on one PC and one tablet.

Although many of the people downloading the Office for iPad suite may just be doing so out of curiosity, a large portion will probably become paying customers eventually. Word for iPad has already reached the “top grossing” chart, meaning it has become one of the best-selling apps on the iPad in less than a week. It is also important to keep in mind that many businesses may opt to work with Microsoft directly to sign licensing agreements for Office 365 subscription packages, so these purchase would not be reflected in App Store statistics.

Despite the successful sales and download numbers, there are a great deal of commenters complaining about the price point for this much-needed suite of apps. Another popular complaint is that DropBox support was not integrated and that the app lacks support for some major printing devices. However, the majority of comments are more along the lines of “these apps are great – it is about time.” Just in case you're wondering what the interface looks like, here's a sneak preview: 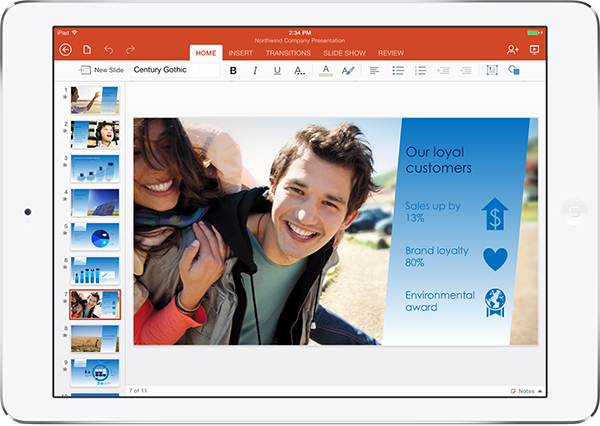